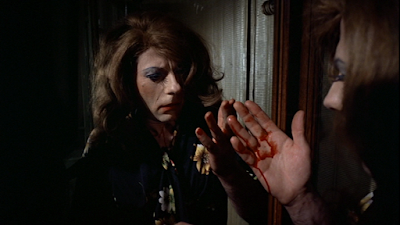 Yesterday, a great deal of what I wrote about was the problem of effusive praise for someone who may be morally repellent. In that review, I referenced something I wrote years ago about Chinatown. We’re heading into the same territory here, since The Tenant is Roman Polanski’s third film in his loose “Apartment Trilogy,” following Repulsion and Rosemary’s Baby. .In some ways, as is the case with many trilogies, the third film is the weakest. This is not a Godfather III situation, though. In a lot of ways, The Tenant (Le Locataire) is as good as anything Polanski ever did.

In a lot of ways The Tenant explores the same themes as Repulsion, only this time from a male perspective. A man named Trelkovsky (Roman Polanski himself) needs an apartment in Paris and discovers one that is suddenly empty. He more or less bargains his way into the apartment with Monsieur Zy (Melvyn Douglas) and takes up residence despite what seems to be a certain level of hostility from the people around him, particularly the concierge (Shelley Winters). Trelkovsky also learns that the former resident of the apartment, an Egyptologist named Simone Choule has left the apartment vacant because of an attempted suicide. She threw herself out of the window and through a glass awning several stories below.

Trelkovsky, disturbed by this, goes to the hospital to see Simone Choule, who screams when she sees him. It is here that he meets Stella (Isabelle Adjani), who claims to be Simone’s friend. Following their meeting and a movie together, Trelkovsky seems to move quietly into his new place only to discover that all of his neighbors seem to be aggressive and demanding, criticizing him and complaining about the smallest step out of line. More disturbing, while moving furniture, Trelkovsky discovers a human tooth in a hole in the wall.

As the film continues, almost imperceptibly, Trelkovsky starts to pick up the habits of the recently deceased Simone Choule. He begins sitting at her table in the local café and switches from coffee to hot chocolate in the morning. He even switches his brand of cigarettes to hers. More and more, he becomes convinced of a plot by the other dwellers in his apartment building that the other tenants are attempting to turn him into Simone Choule and are trying to force him to commit suicide in the same way.

There’s a lot going on in The Tenant, and in many respects, this is not a traditional horror movie. The Tenant is far more concerned with the slow, and then accelerating mental decline of Trelkovsky. There are hints here and there that what is going on is entirely inside Trelkovsky’s mind, and that what happens to him isn’t specifically coming from his neighbors but from his own paranoia. Some of these hints are easily missed, though, and even to the very end, there’s no real way to know if Trelkovsky’s reality is the actual one, or if the one that we are shown by the director (who is playing Trelkovsky) is the true reality.

The Tenant is not a film to have spoiled. This is especially true because the last five minutes of the film are surprisingly harrowing and brutal. There is a true “holy shit” moment with a minute or two left, and then another one to wrap up the film that may turn the entire story and meaning of the film on its head. It’s the sort of devious twist that requires more than one viewing to fully understand in terms of its possibilities. I almost want to watch it again right away to explore the ending, but I’m not sure I’m up to it.

I don’t know if The Tenant is a better film than Repulsion, the film it most closely resembles. It is, though, a film I would much rather watch again. As it happens, this isn’t the first time I’ve seen this, and I’ve never really felt the need to go back to Repulsion. While the typical ratings put this in third in Polanski’s trilogy, I’d put it second behind the near-perfect Rosemary’s Baby.

The brilliance of The Tenant is that much of what it does is subtle and builds slowly. Where a more exploitative movie would put a body in the wall, here we get a tooth. Where a less subtle movie would go for a freak out, The Tenant offers us flashes of strangeness that might have been dreams or moments of insanity. There’s no really firm footing here for the viewer, and that’s by design. The movie and the story wants to keep the audience off balance, and it succeeds in that perfectly.

That said, The Tenant is not an easy film to recommend. It skews toward horror, but it doesn’t pay off in the traditional horror ways. For the right mindset, though, it’s a hell of a ride.

Why to watch The Tenant: Polanski offers up a significant mental screwing.
Why not to watch: There are no real answers here.

Posted by SJHoneywell at 8:56 PM