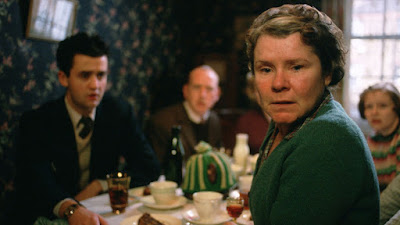 There’s a generation or so of British actresses that I love in just about everything. Judi Dench, Maggie Smith, Helen Mirren, and Joan Plowright come to mind. Imelda Staunton is a bit younger than that group, but she’s just about in the same league. What Staunton can do that the others don’t do as well is play what the Monty Python crew called a “pepperpot,” a stereotypical middle-aged British housewife. That’s absolutely the case in Vera Drake, where, aside from the seriousness of the drama at play here, she could have stepped out of a skit about Mrs. Premise and Mrs. Conclusion.

It’s some time into the film before we really get a sense of what is happening. Vera Drake (Imelda Staunton) works as a domestic for a number of families in post-World War II London. She also spends a good deal of her time looking after people who need help, including her infirm mother and a neighbor named Reg (Eddie Marsan), who she invites to tea, perhaps surreptitiously hoping that Reg might become attracted to her painfully shy and mousey daughter Ethel (Alex Kelly). Vera and her husband Stan (Phil Davis) live a normal life as much as they can in the still-rationing world of 1950s London, a fact that their son Sid (Daniel Mays) plays to his advantage. His job in a clothing shop gives him access to nylons, which he trades to his friends for small luxuries.

What we learn eventually is that Vera’s desire to help people doesn’t stop with checking in on them and making them tea. Vera’s associate Lily (Ruth Sheen) runs a small business in black market goods like tea and sugar. She also arranges for young women who have found themselves in the family way to have back alley abortions, which are provided by Vera. Lily charges for the appointment, unknown to Vera, who does the work free of charge.

Everything seems to go along swimmingly until one of Vera’s clients gets ill from a botched procedure and nearly dies. The young girl’s mother, who arranged things, recognized Vera from an old job, and when she’s forced to give details to the police, Vera’s name comes up. This happens just as the family is celebrating Reg’s and Ethel’s engagement and the pregnancy of Stan’s brother’s wife. Soon enough, Vera is caught up in the system for having performed an illegal procedure.

There’s also a side story going on. One of Vera’s clients has a daughter named Susan (Sally Hawkins) who is sexually assaulted by a young man on a date. Susan also becomes pregnant, but goes through more proper procedures, spending a weekend in the hospital while her mother is away after claiming a family history of insanity and a desire to kill herself if she is forced to have the child.

And that, right there, is my main problem with Vera Drake. Susan’s story, while thematically connected to the main story being told, has almost nothing to do with Vera, save that Vera works for Susan’s mother. If that had been completely excised, I’m not sure we would have lost much in terms of the narrative. Sure, it puts a situational face on the reasons that Vera does what she does, but that’s certainly something that comes up elsewhere in the story as well. Remove this subplot, especially since it is more or less resolved by the middle of the film, and Vera Drake more or less stays the same.

Another, smaller issue, is that I felt in many ways that I had seen this before. I kind of have, because a lot of Vera Drake is found in Story of Women, at least in terms of the basic plot. Vera is a much nicer character, though. She is genuinely sweet, and while she understands what she’s been doing may have moral implications once she is arrested, throughout the film she maintains that all she did was help people. It’s not so much that she is naïve in her thinking, but that she is actively attempting to avoid the cognitive dissonance of what she thinks she is doing and what she is actually doing.

Imelda Staunton is the reason I watched Vera Drake, and it’s a fine performance from her. As I said at the top, I like Staunton quite a bit as an actress, and she is very affecting here. For the first two acts of the film, she is merely a pleasant, middle-aged woman with a unique side career. For the final act, she becomes almost silent, almost unable to deal with what is happening to her. Is it the shame of what she has done? Is it the shame of simply being caught? It’s hard to say. Vera doesn’t really give us any answers, and I don’t know that she should.

All of the performances are good. Phil Davis and Daniel Mays as Vera’s husband and son respectively are excellent. There’s a real sense of family here. Vera and Stan have a real marriage, it would seem, and the two are devoted to each other. It’s actually kind of sweet.

Vera Drake is good, but it’s flawed. There’s some fat to be trimmed here, and that makes it less than it could be.

Why to watch Vera Drake: Some stories demand telling.
Why not to watch: The secondary story doesn’t seem to have much place here.