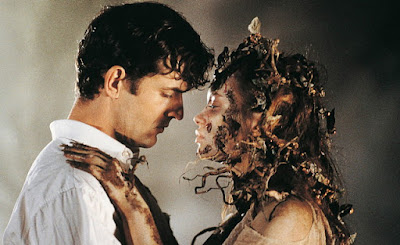 Cemetery Man (also known as Dellamorte Dellamore) is a couple of things at the same time. It’s a bit of a cult film in that it’s the sort of film that film nerds and horror geeks know and not a lot of other people do. It’s also part of the subgenre of horror comedy. So far, so good. Where it hits a roadblock for me is that it’s also Italian horror, and there we have some potential problems. I don’t love Italian horror in general. It’s stylish, but often devoid of substance or even coherence. Dario Argento is the king of this; his films are visually fascinating and frequently make no sense on a basic plot level.

Francesco Dellamorte (Rupert Everett) works more or less as the groundskeeper for a cemetery in Buffalora, Italy. He and his assistant Gnaghi (Francois Hadji-Lazaro) dig the graves, put the bodies to rest and, after seven days, put many of them back in the grave when they rise again. Francesco doesn’t know if this is something happening only at his graveyard or at graveyards around the country or world. What he does know is that he seems to be the gatekeeper against a potentially rising horde of undead.

Wanting to keep his job, Francesco more or less simply deals with what he calls the “returned” as they climb out of their graves. He doesn’t want to create any problems or be labelled as a kook, although he does confess what is happening to his friend Franco (Anton Alexander) who works as a government clerk, but decides it is easier to simply kill the undead himself rather than fill out all of the necessary paperwork.

Things change with the burial of an old man who has a young and attractive wife (Anna Falchi), to whom Francesco is immediately attracted. She, however, is killed during a tryst with Francesco when her husband comes back. When she reanimates, Francesco puts her down, and then she seems to reanimate a second time. When she is finally put down permanently, Francesco becomes despondent that the woman he loves is gone forever and he starts seeing her everywhere. Meanwhile, Gnaghi, despite being only able to say “Gna,” making him a horror movie version of Hodor, becomes infatuated with the daughter of the local mayor (Fabiana Formica). When she dies after being decapitated in a bus vs. motorcycle accident, Gnaghi digs her back up and begins an innocent romance with her reanimated head.

Eventually, Francesco’s depression spirals out of control and he starts killing off live people, shooting them in the head or setting them on fire to prevent them coming back, a sort of preemptive anti-zombie campaign. This is more or less where the movie ends, although there are some very interesting philosophical possibilities for what all of this means that come about in the final few minutes. I can’t go there without going deep into spoiler territory, though, and I’m not sure I’m ready to go there today.

So here’s the thing: I completely understand why there are people who are huge fans of Cemetery Man. There are some real charms here, no doubt. There is a strange sensibility to Cemetery Man that is oddly appealing. This movie comes from a strange direction and approaches the zombie subgenre from a new and interesting direction. I like that because it’s always nice to have something different pop up in any genre. Having a movie that is very much a part of the zombie genre—rising corpses that want to eat the living—but that doesn’t present us with a slowly-growing zombie horde and a massive shoot out conclusion as the dwindling numbers of humanity attempt to flee to safety is fun.

But, like a lot of Italian horror, there are things that happen in the plot that simply don’t make sense. The narrative doesn’t hold together at all past about the middle of the film. I don’t understand anyone’s motivation, least of all Francesco’s. Add in a moment that is one of the most singularly sexist things I’ve seen in a film in ages (one of Francesco’s look-alike girlfriends is terrified of sex…until someone rapes her and she falls in love with her rapist), and this is a film that has some significant issues in terms of both where it goes and how it gets to where it wants to go.

For those who are fans of the film—and I know there are some—I get it, and I sympathize. I love the first half of the film. I don’t get the second half, though. I think I’d be willing to watch this again, but it’s right on the line of what I’m willing to say I like vs. what I don’t. If it had been the first half in tone and structure all the way through, I’d love it.

Why to watch Cemetery Man: The slowest zombie invasion in history.
Why not to watch: I’m not sure all of this works the way it’s supposed to.