The Rest is Foolish, Too 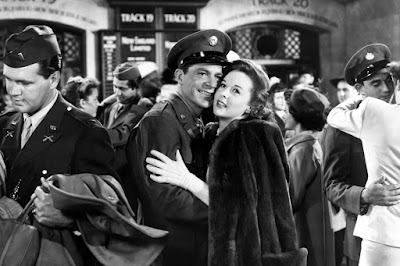 Some actors fall into particular types of roles. That’s natural. With Susan Hayward, that role was of a woman fallen in some way. Hayward was nominated for five Oscars; she played an alcoholic in three of those roles and in a fourth she played a criminal. My Foolish Heart puts her in one of her most fallen roles of her career. It feels very much like a Susan Hayward role, a tough woman who has been kicked around by life, partly because of her own bad choices. Hayward gave the impression of someone knocked around a lot and still standing, almost by force of her own will. That’s certainly the case here, despite how damaged this character really is.

Before I get too involved in the movie itself, I feel like I need to discuss the problems I had watching it. I jumped at the chance to watch My Foolish Heart because it was on my list of films that I was having difficulty finding. NetFlix doesn’t have it, and evidently no lending libraries in Illinois attached to the database I use has it, either. I just discovered it online. Typically, I download files off YouTube and watch them later. In this case, My Foolish Heart was only available on DailyMotion. I’ll be blunt: DailyMotion is terrible. It’s glitch, required frequent restarts, and ads pop up every five minutes. This is a 99-minute movie that took well over two hours to watch. I do my best not to let things like this affect my opinion, but when it’s this rough, it’s hard not to let it affect things at least a little.

Eloise Wengler, nee Winters (Susan Hayward) reconnects with an old college friend named Mary Jane (Lois Wheeler) after a number of years. Eloise drinks too much and doesn’t appear to have many friends. It’s also soon obvious that she and Mary Jane didn’t part on the best of terms. Eloise is married to Lewis Wengler (Kent Smith), and the marriage is not a happy one. Their daughter Ramona (Gigi Perreau) is an unhappy kid as well. Lew finally arrives home and drops the bombshell on Eloise; he’s leaving her and taking Ramona. This triggers a flashback that will cover most of the rest of the film that more or less explains why Eloise is who she is and how she got involved in such an unhappy marriage in the first place.

Where we’re going here is soon going to be quite evident. We flash back to Eloise’s college days when she was roommates with Mary Jane and Lew seemed to be interested in both Eloise and Mary Jane. At a party, Eloise meets Walt Dreiser (Dana Andrews) who seems flashier and more aggressive than she is used to in a guy. But, he makes her feel better in terms of her rivalry with another girl. The two go on a couple of dates and Walt is very forward. Eloise fends him off, but the two are clearly interested in each other. About a month later, Walt is in the army (this is just before World War II) and he shows back up in town after an absence. He and Eloise go out, and she is caught kissing him on her way back to her room. Because of the time this was made, Eloise is expelled for this action, bringing on the wrath of her mother (Jessie Royce Landis) and the understanding of her father (Robert Keith).

In come the parents to take Eloise back to Idaho, but her father sympathizes with her plight and gives her money to leave the train and head back to New York where she finds a job and spends a lot more time with Walt. Eventually, Pearl Harbor happens and Walt is preparing to ship out. Naturally, Eloise has become pregnant (it’s obvious even though it’s never really stated) and is desperate for Walt to marry her. He doesn’t, of course. Walt’s fate and the reason Eloise marries Lew can be pretty easily guessed at this point.

I spent an entire paragraph discussing the problems I had watching this because My Foolish Heart isn’t that good. It’s sappy and syrupy and terribly melodramatic. Susan Hayward is good, because she typically was, and Dana Andrews is good enough for what he has to do. This is Hayward’s vehicle, though, and she does everything she can with it. The truth is, though, that Hayward was better when she was playing willfully “bad” girls, not those who have fallen because of bad luck and circumstance. Eloise ends up a train wreck because of things that happen to her. Yes, some of that comes with some decisions she makes, but those happen because of what happens to her.

I’d have liked to have liked this. The circumstances under which I had to watch it didn’t help a great deal, but even with a pristine DVD, I’m not sure this is one I would ever have enjoyed. Aside from Hayward’s game performance, the best thing here is Robert Keith as Eloise’s father. He’s actually pretty cool, and I’d have loved to have seen more of him.

Why to watch My Foolish Heart: This is what real-world fantasy should look like.
Why not to watch: It’s so syrupy you could pour it on pancakes.