Film: John Dies at the End
Format: Streaming video from NetFlix on The Nook. 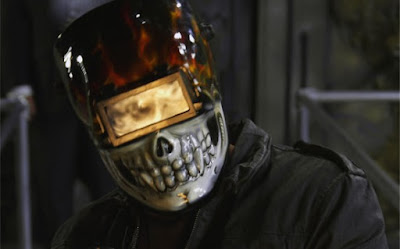 Every now and then, I watch something that almost completely defies description. That is very much the case with John Dies at the End, a film that that psychoactive drugs watch when they want to get stoned. I realize that a large part of this blog is going through narrative structure and looking at why films and stories work the way they do. That’s one of my main interests in movies, after all. I like looking at the whys and wherefores of stories, figuring out what makes them tick, and whether or not they actually work. John Dies at the End has a narrative and it’s something that can be easily followed despite the number of twists and turns it takes. The problem is that I think I’m almost completely incapable of explaining both what it is and how it works.

The framing story has David Wong (Chase Williamson) sitting at a table in a Chinese restaurant speaking to a reporter named Arnie Blondestone (Paul Giamatti), telling his story. This story involves the ability to read minds, tell specific facts about the past and future, the ability to slip in and out of time, alternate dimensions, a massive sentient computer, and a drug called “soy sauce” that gives those who take it unique abilities and also frequently kills the people who take it.

Here’s the thing—the story itself is so bizarre and twisty, so convoluted and wrapped up in itself that I don’t think I can do it adequate justice to try to spell it out. Despite this, it all makes a certain coherent sense within the context of the film itself. John Dies at the End is completely coherent despite also being completely batshit crazy. It follows its own internal logic, a logic that makes sense internally, but can’t really be reconstructed easily in text. So I’m not going to bother. Honestly, it would take multiple pages to try to spell out everything—the clouds of insects that take people over, the mask-wearing alternate dimension cultists, the presence of a stage psychic named Marconi (Clancy Brown), dimensional spiders that can only be seen when you’re not looking at them, and a monster made of frozen meat. Seriously, though, for as bonkers as all of this is, it works.

What I find very interesting is the number of tangents that the film takes that seem to more or less operate as world building but that have no actual effect on the story other than to create the world. There is a long tangent at the start, for instance, that seems to serve only as a way to set up the connection between David and John (Rob Mayes). We get a little bit of a glimpse into the trans-dimensional world that these two characters live in and we establish a connection between them and Marconi, but otherwise, the sequence with the frozen meat monster and the girl who turns into snakes really exists for a few laughs and as a way to demonstrate the sort of twisted reality we’re living in. This part of the story has no real bearing on the ultimate story being told.

It’s also a film world that seems to be right in the wheelhouse of director Don Coscarelli, who is best known for the Phantasm series and is similarly known in cult circles as the guy behind Bubba Ho-Tep. The insanity of the basic world here allows Coscarelli to play with reality in ways that both warp the narrative and include broad humor. For instance, when trapped by the meat monster, John and Dave attempt to escape the basement, but the doorknob turns into a gigantic flaccid penis. John’s response to this is to look at the, uh, knob, and exclaim, “This door cannot be opened!”

The best way to sum up the experience of John Dies at the End is to comment that it is adapted from the book of the same name. I haven’t read the book, but after seeing this film a couple of times, I desperately want to. This is Hunter S. Thompson writing Indiana Jones; it’s Naked Lunch at a rave, and I can only imagine what must have been left out from the book to make something simultaneously this weird and this comprehensible.

John Dies at the End is one of those rare films that was conceived as a cult film and succeeds in every measure of being a cult film. It’s fully aware that at least a third of the people who see it will regard it as ridiculous trash and will be able to offer specific, sound reasons why this is the case. Similarly, a third of viewers will hail it as genius and will similarly be able to back up that position.

As for me, I think it’s pretty great. It’s certainly not for everyone, and I completely understand someone finding it stupid and not worth the time. I disagree, but I also fully understand that that’s a position that can be backed up.

Why to watch John Dies at the End: It’s holy-shit weird.
Why not to watch: You’ll have an aneurysm trying to explain it.

Posted by SJHoneywell at 2:48 PM