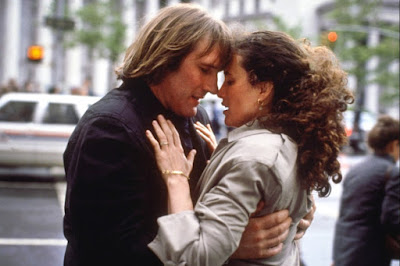 I seem to be complaining about a lot of the movies I’ve been watching lately. I’m saying this up front because that’s not going to stop today. The case for Green Card says “If you liked Pretty Woman, give Green Card a try.” Well, I didn’t like Pretty Woman. I thought it was financial porn and cheap fantasy, so I didn’t have really high hopes for this one. The one thing it seemed to have going for it was the presence of 1990-era Gerard Depardieu, the same year he was nominated for Cyrano de Bergerac. He was the one thing I had my hopes riding on.

The movie’s plot rests on a poorly-established initial premise. When the movie begins, we see the wedding ceremony of Bronte Parrish (Andie McDowell) and Georges Faure (Gerard Depardieu). This would be where most romantic comedies end. In this case, Bronte and Georges don’t even know each other; the marriage is one of convenience. For Georges, it’s a way to stay in the States since his visa has run out. Bronte needs the marriage to secure her dream apartment, since she is a horticulturalist and the apartment comes with a greenhouse. The two marry and go their separate ways and Bronte gets her apartment, telling the people vetting her that her husband is in Africa working on musical compositions.

But, and you knew this was coming, immigration services needs to make sure this is a real marriage and not a sham. The two have little time to get their stories straight, but the interview seems to go well until it becomes clear that Georges not only can’t get Bronte’s name right (he calls her Betty), he also doesn’t know where anything is in the apartment. A more in-depth interview is scheduled.

So now our hapless pair has just a weekend to learn about each other. Georges moves in, and of course the two are diametric opposites. Bronte loves plants and is a vegetarian. Georges smokes and eats meat. She drinks decaf; he wants real coffee. He is a slob and selfish; she is uptight and emotionally cold. Hilarity ensues, and builds when Bronte is unable to keep Georges from meeting her friend Lauren (Bebe Neuwith). An additional complication is Bronte’s boyfriend Phil (Gregg Edelman).

But, we need to find some common ground here. Bronte is a member of a group called the Green Guerrillas, who oversee and set up inner city gardens. Lauren’s parents are planning on leaving the city and have trees to donate. It’s Georges who comes to the rescue here, securing the trees for the group. Georges also manages to pretend to be Bronte’s handyman when her parents come to visit. And, of course, INS is going to show up again at the end.

Roger Ebert popularlize the phrase “idiot plot” in reference to a movie that only works if everyone involved is an idiot. There’s a good deal of that going on here. Bronte’s desire for the apartment could have been just as easily resolved if she’d pretended to be married to Phil, someone who would be literally able to help her with the greenhouse and everything she wants to accomplish without having to worry about lying to everyone and breaking the law. In fact, her lawyer (the great Robert Prosky, who isn’t in this nearly enough) is shocked by everything she’s done because she evidently didn’t tell anyone that she had agreed to this scheme.

As it happens, there were a few more saving graces than just Gerard Depardieu in a film that was specifically written to introduce him to an American audience. I like Bebe Neuwirth and I like Robert Prosky, so I liked that both of them were in this. This is Depardieu really at his height as an actor, and it’s difficult to not appreciate him for that. Despite being essentially characterized in general as a selfish jackass, 27 years ago, the man could be charming, and he is here almost in spite of the plot and character.

This brings me to Andie McDowell, and I won’t have as nice of things to say about her. With the exception of Groundhog Day, I can’t really think of a place where I’ve genuinely liked her. Even Four Weddings and a Funeral, a film that I genuinely like, is one that I think would be better with someone else in Andie McDowell’s role. Hell, this would have been better by putting Bebe Neuwirth in as Bronte. McDowell’s voice grates on me, and in this film, her attitude grates on me as well.

Suffice to say that I didn’t like this film much. I like Depardieu well enough, but I’ve got nothing else here. The plot does nothing for me. Ultimately, I don’t care if Bronte gets her greenhouse or her plants and I don’t care if George gets to stay in the country.

Why to watch Green Card: Gerard Depardieu before he expanded into a planetary-sized mass.
Why not to watch: It relies far too heavily on everyone in the film being an idiot.