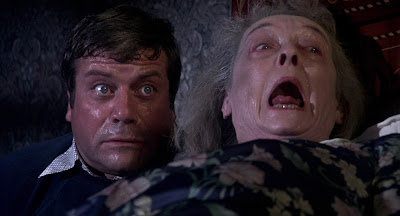 Sometimes you have to wonder just how a movie happens. In the case of Burnt Offerings, that’s a completely honest appraisal on the surface. This is a haunted house movie, but it features Karen Black, noted ham Oliver Reed, Burgess Meredith at his absolute campiest, and Bette Goddam Davis. Bette Davis! How the hell did this movie get made? And why didn’t they make more of them?

The Rolf family—father Ben (Oliver Reed), mother Marian (Karen Black), and son David (Lee Montgomery) are planning a full-summer vacation by renting a huge but ramshackle house in the middle of nowhere California. The house is a bit run down, but Marian falls in love with it immediately. Ben isn’t so sure, especially when he meets the owners, Roz (Eileen Heckart) and Arnold Allardyce (Burgess Meredith). These older siblings are plenty weird, but they offer the Rolf’s the house for the entire summer—Fourth of July to Labor Day—for just $900 total. The only catch is that their mother lives in the upstairs room—they’ll have to bring her a tray of food three times a day since she never leaves the house. That Allardyces promise that she’ll be no bother.

So they take the deal and show up with a fourth member of the family, Ben’s aunt Elizabeth (Bette Davis) in tow. Marian immediately sets to putting the house to right and Ben and David start cleaning up the pool. Things move quickly, but there are some indications for the audience right away that things are more than a little strange in the Allardyce house. When they arrive, the find the kitchen fully stocked for them, although the pantry light doesn’t seem to work. Ben gives himself a minor cut and suddenly the pantry light works after all.

This is going to be a theme here, and those of us in the audience figure it out a lot sooner than the family does. Essentially, the house is an energy vampire that sucks the life out of the people who live inside it. Someone gets hurt or upset and suddenly all the clocks are working again, or the pool cleans itself, or the flowers in the greenhouse return to life. The Rolfs are oblivious to all of this, although Elizabeth soon hates the house and wants to leave and Ben starts to get an uncomfortable feeling as well. This is intensified when Ben tries to drown David in the pool.

One of the big draws here is Bette Davis because this was at a time in her career when she could be counted on to bring the crazy old lady. After all, this is after films like Hush, Hush Sweet Charlotte and What Ever Happened to Baby Jane? Surprisingly, Davis is the least crazy character in the film with the possible exception of young David who hasn’t had the opportunity to grow into the full crazy of his parents. It’s a fun little curveball that Davis comes across as the most grounded adult of the group.

There’s a subplot involving Ben Rolf that Oliver Reed plays to its hammy hilt. In flashbacks we get scenes of Ben as a child witnessing his mother’s funeral. Also present is a tall, gaunt chauffeur who grins evilly whenever the young Ben catches his eye. This guy shows up a few times in the course of the film, mainly in dream or hallucinogenic sequences and seems to be some sort of boogeyman for Ben even if he really isn’t there. For his part, Reed plays the film as if he were Richard Burton laying into a juicy role. Reed sweats and shakes, bellows and flails around, leaving no piece of scenery unchewed.

Then there’s Karen Black. I can’t say this is always true of her, but in Burnt Offerings, she looks absolutely artificial. She’s odd looking in the best of times with massively puffed-up lips and eyes so closely set that she’s almost a cyclops. In this film she looks like someone wearing a Karen Black mask; she’s shiny and a little plastic. In a lot of ways, though, this is Black’s film. The house more or less claims her in roughly the same way the house in The Haunting claims Julie Harris. Black handles the role well, and more than anything, it is her performance that ties the film together.

If there is a complaint here, it’s that Burnt Offerings isn’t that good at hiding where it not just wants to go but is going to take us. We in the audience are well aware of exactly what is happening long before it happens and we can pick out some of the subtleties and details early on thanks to them being applied with a mallet. Because things are so obvious, the running time (just shy of two hours) is far longer than it needs to be. Trim this down to the more standard horror movie length of 90 minutes, and it would be a tightly-wound little spook thriller. As it stands, it’s too fat for the plot.

Still, it’s fun. You could do a lot worse for a film that strives and mainly achieves to create a sense of dread through atmosphere and small changes. It’s not a perfect film, but it’s more than serviceable for what it wants to do.

Why to watch Burnt Offerings: Not your typical haunted house movie.
Why not to watch: When Bette Davis isn’t the most memorable screen presence, it’s likely that something has gone horribly wrong.