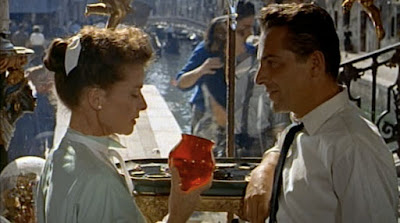 When you think of David Lean, you probably think of epic films, but those films are from the end of his career. Lean’s last five films were epic in terms of length and most of them were epic in scope as well. Lean’s career contained smaller films, too; Brief Encounter stands out as a prime example, but the strength of The Bridge on the River Kwai, Doctor Zhivago, A Passage to India, and especially Lawrence of Arabia (and to a lesser extent Ryan’s Daughter) are what causes him to be remembered as a director of epics. Summertime is the last of his smaller, shorter movies, but with its exotic (for 1955) setting, it serves as a bridge between Lean’s earlier career and his later movies.

Summertime, based on a play called “The Time of the Cuckoo,” seems to have been tailor-made for Katherine Hepburn. Much like Lean is associated with epics, there is a particular kind of role that is easily associated with Hepburn. For a movie from then 1930s-1950s, any female character who has a strong independent streak, often living life on her own terms despite not being married (unusual for the time), Katherine Hepburn was your go-to. So, that’s exactly what we’re going to have here.

Jane Hudson (Hepburn), a middle-aged spinster secretary, has gone to Venice for a summer vacation after saving for the trip for several years. She meets several other Americans when she gets to Venice who are staying at the same place. Their “hotel” is actually the residence of Signora Fiorini (Isa Miranda), who turned her home into a sort of inn after her husband died in World War II. Also staying at the hotel are an older couple named Lloyd (MacDonald Parke) and Edith (Jane Rose) and a younger couple named Eddie (Darren McGavin) and Phyl (Mari Aldon). While they all attempt to include Jane in several of their outings, Jane always demurs and stays on her own. She seems fine with this, even making a sort of friend in Mauro (Gaetano Autiero), a young street (canal?) kid. One night when she sees a bunch of young couples, she more or less realizes her loneliness.

The next day Jane finds an antique red goblet in a store and goes in to buy it from Renato de Rossi (Rossano Brazzi), a man whom she saw earlier and who made her a bit uncomfortable. He teaches her how to haggle. There are a few sparks between them, but since Jane is, well, a middle-aged spinster, she panics. Renato pursues, finding her at her hotel. The two are more and more attracted to each other until Jane makes the discovery that Renato has children and is married. He protests, saying that he and his wife are separated.

So will the relationship happen or will Jane remain a spinster? If she does give in to the relationship, will she stay in Venice? You’ll need to watch the last half hour or so of Summertime to know for sure.

The truth of the matter is that Summertime wasn’t made for me. It was made for two particular audiences. One group is a women of a certain age, particularly those who might be looking for a little more romance in their lives. Jane Hudson is a clear stand-in for that particular stereotype, and a trip to an exotic locale and a potential romance with a good-looking foreign gentleman certainly fits the bill. The other audience here are those people who, back in the day, liked movies like this one for their travelogue aspects. The film was made almost entirely on location in Venice, and the scenery is a big part of the attraction here.

There is a lot to recommend Summertime. It’s exquisitely acted, for one thing, which is exactly what you’d expect with Katherine Hepburn in the lead role. It’s also beautifully directed, which is what you’d expect with David Lean at the helm. Lean uses Venice almost as its own character, and it’s clear that he loved the city and wanted to show it off in the best way he could. The idea of the film being something of a travelogue isn’t that crazy—evidently, tourism to Venice soared in the year following this film’s release.

My problem here is that I just don’t find it that interesting. I don’t dislike the characters that much (although Darren McGavin’s Eddie turns out to be kind of a shit), but I also don’t care about them that much. Jane isn’t very interesting or compelling. Hepburn does all she can with the character, but that’s not enough to make me want to like her, and while Renato has the potential to be interesting, he’s pretty much absent for the first half of the film.

And that’s a problem. Despite the beauty of the location and the talent on the screen, the whole thing just feels flat, and I had to work to keep watching. I just wasn’t interested.

Why to watch Summertime: The last of David Lean’s non-epics.
Why not to watch: The characters aren’t very interesting.