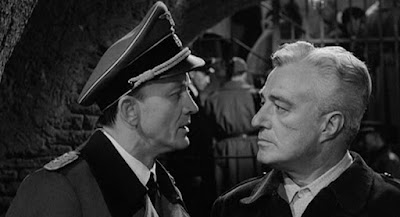 I always find it interesting when a director appears as an actor in another director’s film. I don’t mean this in cases where someone has made a name for him or herself first as an actor, did some directing, and continued to act. No, I find it fascinating that someone who is known specifically as a director is cast as an actor by someone else. In the case of General Della Rovere (or Il Generale Della Rovere in the Italian), the director-turned-actor in question is the great Vittorio De Sica, one of the towering figures of the Italian neorealist style. The director in question is equally important neorealist Roberto Rossellini. That this is more or less just after the great neorealist period is of no importance.

Like many of the great neorealist films, General Della Rovere is without question a war film. It’s also sort of a prison film, at least for the second half of its running time. We begin by concerning ourselves with Vittorio Emanuele Bardone (De Sica), who is something of a hustler and a compulsive (and unlucky) gambler. Bardone is desperate for money, having gambled away everything he had. He already owes a great deal of money to a German officer in occupied Milan. Convinced that he has nothing else to lose, he attempts to sell a piece of fake jewelry with no success.

Much of what Bardone does is attempt to find out what has happened to the various Italian citizens who have been arrested by the German military, passing bribes when he can (and when he hasn’t gambled away the money) to ensure that particular prisoners are not sent off to concentration camps. At least that’s what he says he’s doing. He owes money to people, so he’s making a lot of promises that he can’t really fulfill and using the money he gets from people to help protect their loved ones for his own ends. This all comes to a head when he takes 100,000 lira from a woman to (he says) help safeguard her husband. When he’s caught lying about his safety—the man was executed—Bardone is arrested.

Once he is in the custody of the occupying German forces, Bardone is given an option. He can be sent to prison has himself and tried for his crimes, followed by his execution, or he can pose as rebellious military leader General Della Rovere in an attempt to ferret out the other resistance leaders from among the prisoners. Since posing as Della Rovere will not necessarily end in a death sentence for him, he takes the deal and enters prison as another man. The deception is a carefully planned one, since the actual Della Rovere is gunned down, thus losing the potential of questioning the man himself. When a collection of new prisoners are brought in, Bardone is told to do everything he can to ferret out the real resistance leader from among the crowd.

What happens is al about Bardone’s internal struggle. For his entire life, he has made his living as a gambler, being unlucky far more often than his luck holds. Now, he’s thrust into prison with a specific task to handle and given virtually no freedom to eve pursue inquiries. Having always been the epitome of a survivor, Bardone’s new role takes him into unfamiliar territory: as a loyal Italian, Bardone doesn’t want to be accused of aiding and abetting the enemy. At the same time, he is not a man who is frequently willing to take a chance, especially with his own life.

It’s a great idea for a story. The question being asked here is roughly asking how much is this man’s life really worth. What happens with Bardone/Della Rovere is the same sort of moral dilemma that keeps people up at night. When that story is written well, it’s impossible for it not to be compelling at least in some respects.

My biggest complaint is that it’s simply too slow. The original released version ran a bit shorter than the full version I watched here. This is a story that could be told in about 90 minutes with a skilled director at the helm, able to deal with any potential issues quickly and cleanly. Rossellini is a skilled director, so I question the necessity of much of the first half of the film. Things don’t really pick up and get interesting until Bardone is sent to prison. To this point, it’s a lot of him attempting to make sure that everyone knows what is going on. We do: the movie shows us multiple attempts to sell the ring, and we don’t need as many as we get.

Still, this is an interesting film, and it has a number of solid points. I’m happy I got to see it, since it’s so difficult to track down.

Why to watch General Della Rovere: A very different war story.
Why not to watch: It’s very slow.