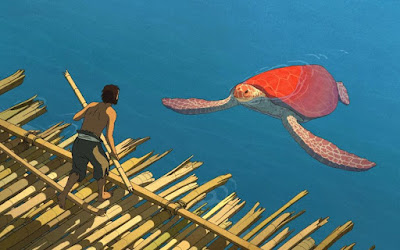 When I hear “Studio Ghibli,” I think of Miyazaki. I’m pretty sure I’m not alone in that. While there are other directors and creators working there, it’s Miyazaki who made the studio what it is in terms of its notable films and generally positive and even rabid fandom. A film like The Red Turtle is a good reminder that they do more than just Miyazaki’s films and that Miyazaki’s films aren’t the only ones that are worth seeing.

The Red Turtle (otherwise known as La Tortue Rouge) is also a reminder that Studio Ghibli’s output isn’t entirely Japanese. While this was certainly produced at least in part by the Japanese company, this is also a French and Belgian production, and the director is Dutch. This is a rare film in the sense that, while not a properly silent film, the only real lines of dialogue are a repeated “Hey” at various times as well as some screaming and shouting. In that respect, the language isn’t an issue at all, and it’s one of those rare films that genuinely requires no translation or various audio tracks for anyone to watch, follow, and understand.

An unnamed man (voice by Emmanuel Garijo) is washed up on a deserted island. Wanting to return to society, he builds a raft, but it is destroyed by some unknown force. He returns to the island and attempts to escape with stronger rafts a couple more times only to have each one destroyed. On his third attempt, he discovers that the force keeping him on the island is a gigantic red turtle.

After his third attempt, the red turtle climbs out on shore. Incensed at this creature that has prevented his escape, the man beats the turtle with bamboo and eventually flips it over onto its back, stranding it. He later feels remorse for his action and returns to it, finding it dead. That night, the turtle’s shell cracks down the middle and the turtle becomes a woman (Barbara Beretta) inside the shell. The man works to revive her and eventually she wakes up and drags her shell into the ocean, releasing it. The man does the same with his fourth raft.

The next section of the film flashes forward through the life of this couple on the island, a couple that is soon a trio with the birth of their son (Axel Devillers, Baptiste Goy, and Tom Hudson, depending on his age). Over the course of a few minutes, we see the boy at various stages of his life. He discovers a bottle, a tangible reminder (for the father) or evidence (for the boy) of the world beyond the island. The boy also makes friends with the many turtles that live in the waters off the island.

Eventually there is a terrible tsunami that devastates the island and the bamboo forest. While everyone survives, the island is shattered. This causes an important decision for the boy, one that will affect both him and his parents. This culminates in a bittersweet, but perfectly natural ending for a film that works in this way, one that fits in with the subtle fantasy that has been on screen for the entire running time.

I’ve left a lot out, and that’s intentional. The Red Turtle is unique in many ways, although it also fits in perfectly with many of Studio Ghibli’s best films. It is far deeper than a typical animated film, and one that, while it may appeal to children, is not specifically made with children in mind. There is a great deal of subtext here, and The Red Turtle, for a film without any real dialogue and that runs a smidge over 80 minutes, can be interpreted in a variety of ways. I have my own interpretation, of course, but since that requires discussing the entirety of the film, this is best handled under a spoiler.

When his son decides to leave the island, the son is finding his own way in the world, finding his own responsibilities and meaning, and his parents are left to accept this and continue with their lives understanding that their son’s choices are his own and don’t invalidate their own. When the film ends, the man has died and the woman transforms back into a turtle. This works because she was always sort of allegorical anyway.

The Red Turtle is a beautiful film, one that fits in perfectly with both the style and the overall feel of Studio Ghibli’s best work. The art is gorgeous, using a very clear style that is a touch minimalist, but effective all the way through. While Oscar seems to award Best Animated Feature to the most popular decent animated film every year, I appreciate that films like this one are regularly nominated in the category, because it offers a larger audience for little films like this that truly deserve that audience.

Why to watch The Red Turtle: It lives up to the standards you expect Studio Ghibli.
Why not to watch: If you’re not prepared for it, the lack of speech can be a problem.