Off Script: The Twilight Zone: The Movie 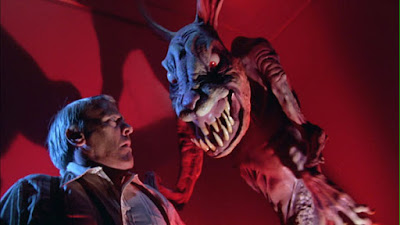 If you’re older than about 30, you watched The Twilight Zone on television at some point. This was the television version of M. Night Shyamalan’s career, except that the twists almost always worked on the television show. Weird, creepy little stories that sometimes packed a moral lesson and sometimes just wanted to give people the shivering willies made for good television. Seriously, when I was younger, it was probably the only show I knew of where people my age would voluntarily watch a black-and-white television show because the stories were frequently that good. So, it’s only natural that eventually The Twilight Zone: The Movie was conceived of and released.

What I remember most about it from 1983 (it’s release date falls squarely between my sophomore and junior years in high school) is the controversy that surrounded it. Specifically, that controversy was the rather horrifying deaths of actors Vic Morrow, Renee Chen, and My-ca Dinh Le (the latter two being 6- and 7-years-old respectively), who were killed when a helicopter crashed on them while filming the first segment. This accident led to multiple court cases and almost led to the cancellation of the entire project. What I remember most was people being more than a little outraged that the film itself seemed to take no notice of this tragedy, not following the typical pattern of dedicating the film to someone close to the production who had died.

Anyway, The Twilight Zone: The Movie takes its cue directly from the television show, presenting us with a quartet of short films anthology-style with a framing story that covers the beginning and end. In the opening two men (Albert Brooks and Dan Aykroyd) drive down a deserted highway and play a very strange game of chicken. The rest of the films proceed almost as episodes of the television show itself. Since Rod Serling had long since died before this movie appeared, the segments are narrated not by him, but by Twilight Zone veteran Burgess Meredith. The four segments are:

Time Out (with the prologue, directed by John Landis): a racist (Vic Morrow) goes through something like a portal in time, discovering in multiple ways what it is like to be on the receiving end of racist hatred. This is the only one of the four segments not based on an episode of the original show.

Kick the Can (directed by Steven Spielberg): an elderly gentleman (Scatman Crothers) attempts to bring a new life and vitality to the residents of a retirement home.

It’s a Good Life (directed by Joe Dante): a schoolteacher (Kathleen Quinlan) meets a young boy (Jeremy Licht) who has a strange and terrible relationship with his family and who is possessed of strange and horrible powers.

Nightmare at 20,000 Feet (directed by George Miller): an airline passenger (John Lithgow) who is already suffering from near-crippling fear of flying sees something terrible on the wing of a plane flying through a thunderstorm.

Like most anthology films, The Twilight Zone: The Movie is uneven in terms of the various stories it tells. The first story is probably the most unsatisfying despite having in many ways the most interesting message. It feels very clipped and short, almost certainly due to the deaths of Morrow and the two young Vietnamese actors. The film builds to the exceptional Nightmare at 20,000 Feet, which was one of the classic episodes of the original series and is honestly just as good in this version.

It’s the other two that were the most interesting to me on this watch. In 1983, I would have told you that Kick the Can was by far the weakest of the four segments and It’s a Good Life was arguably the best. Now, I’m not so sure I see them that way. Kick the Can is pure Spielberg and it’s really well made. It simply feels out of place as the only one of the four segments without a strong (or any) horror element. It’s sweet, though, and rather charming. On the other hand, this version of It’s a Good Life is the only one of the last three that I don’t think is stronger than the original television show. There are choices made in the script that I think damage the story. That said, I like the fact that Bill Mumy, who played the boy in the original episode, shows up here at the beginning.

It’s fun to see some of the actors here. Keven McCarthy makes an appearance, as does Nancy Cartwright, for instance. The first segment also includes a great reference to Animal House that I won’t spoil here. Suffice it to say that if you pay attention to the short bios of the characters at the end, there’s a little bit of payoff here. The big question is, of course, whether or not it’s any good. It is, but I think it has suffered some in the last 30+ years since it was released. I don’t think it’s nearly as good as I thought it was when I first saw it all those decades ago. It’s still worth seeing, but it was far better in my memory.

Why to watch The Twilight Zone: Like most anthologies, it has some strong stories.
Why not to watch: Like virtually all anthologies, it’s really uneven.