You can say what you want about Roger Corman, but the man does have a couple of particular talents. First, judging by the people who made films for him, Corman was a great judge of directorial talent. Second, he was capable of doing a great deal with a limited budget. Third, the man found a tremendous niche with films specifically based on the writings of Edgar Allen Poe. With The Haunted Palace, Corman stepped a little outside of that comfort zone, making a film that is clearly based on Lovecraft’s “The Case of Charles Dexter Ward,” but he made this essentially as one of his Poe films, so that strange connection of making something watchable carried through.

The film starts a few years before the American Revolution in Arkham, MA. Women in the town are mysteriously drawn to the rebuilt palace of Joseph Curwen (Vincent Price). The townspeople have decided that Curwen is a warlock and storm the palace. They drag him out and burn him at the stake, although they are convinced not to attack his mistress, Hester Tillinghast (Cathie Merchant). Before he dies, Curwen pronounces a curse on the town, saying that those who are burning him, their children, and their children’s children will suffer.

Flash forward 110 years and Charles Dexter Ward (also Vincent Price) and his wife Ann (Debra Paget) have inherited the palace and arrive in town. The locals, who look exactly like their ancestors, are suddenly terrified that Joseph Curwen has returned. Charles and Ann also discover that there is some sort of curse hanging over the town. Many of the inhabitants are severely disfigured. The direct descendants (Leo Gordon, Elisha Cook Jr, and John Dierkes) of those who killed Curwen are not affected. The only friendly face that the Wards find in town belongs to Dr. Marinus Willet (Frank Maxwell), who takes them to the dilapidated palace.

Here, the Wards discover a caretaker named Simon (Lon Chaney Jr.) and a portrait of the former master, who looks exactly like Charles (of course). The portrait soon becomes the object of fascination for Charles, and to the audience, it’s soon evident that the spirit of Joseph Curwen is alive and well inside the portrait and is taking over the body of Charles Dexter Ward for short periods of time. His goal is to resurrect Hester, a goal he is aided in by Simon and another man named Jabez Hutchinson (Milton Parsons). However, he can’t hold onto the body for long, which means that frequently Charles gets control of his body back and becomes himself.

To further cement the connection here, we learn that Joseph Curwen was in possession of a copy of the Necronomicon and that his goal was to recall some of the old gods like C’thulhu and Yog Sothoth and mate them with human women to create a new race. The other plot going on is that when he is in possession of the body, Curwen wants to enact his revenge on the descendants of the people who killed him, something he happily does with fire, the way he was killed more than a century before.

Really, that’s the whole movie here. Charles Dexter Ward fights for control of his body against his ancestor. When he’s Charles, he’s relatively logical and coherent. When he’s Joseph, he’s insanely working toward his plan. Every time he’s Charles, he seems to realize the danger he is in and moves to leave the house. These periods get shorter and shorter, though, and soon enough he’s Joseph again and demanding that his wife leave him alone and saying that he plans to stay in the house on his own.

The thing is, though, that The Haunted Palace works all the way through. It’s a lot of fun to watch Vincent Price in his horror movie prime chewing up the scenery with that sort of cool malevolence that he often had when he was working with Roger Corman. There’s something very natural about watching Price be evil and enjoy being evil, something he seemed to do so naturally that it’s a little surprising he had a long and solid career before he ever started doing horror movies. Otherwise, it’s nice to see Elisha Cook Jr. and Lon Chaney Jr. doing what they do best.

The biggest problem is the incredibly amateurish cosmetic effects. The deformities of the local townspeople are severe, like being born without eyes. This is represented in the film by more or less attaching flesh-colored Silly Putty to people’s faces to represent skin having grown over the eyes. It looks pretty much exactly like what it is, and what first appears in a more distant shot was something potentially disturbing turns out to be almost comic. It’s a shame, because with a touch more budget and time, this could have been really interesting and creepy. The Haunted Palace is a solid film, the sort of film that won’t be anyone’s favorite, but is difficult to dislike for those who like the sort of gothic horror that’s on display here. It’s fun, and really, that’s enough. 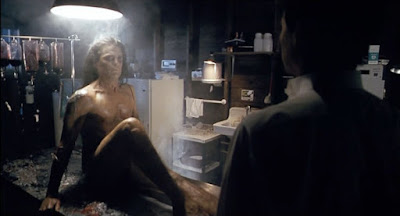 The Resurrected (also known by the much more evocative title of Shatterbrain) is much more clearly and obviously based on the same Lovecraft story. It has the benefit of being made in the early 1990s when showing gore was much more accepted and acceptable, which bodes well for certain aspects of the story. This follows the same general path, missing out the weird eyeless people in the town. Instead, we’re in the modern world (well, modern for 1991) and the horror elements are much more specific to Charles Dexter Ward (Chris Sarandon) than to the more general public, although there will be a decent body count by the time we get to the end.

The biggest difference here is that The Resurrected doesn’t give us a Charles Dexter Ward who is suddenly blindsided by this appearance of his ancestor. In this case, he’s much more a willing participant in what happens to him. At the very least, he is actively attempting to resurrect his ancestor Joseph Curwen (also played by Sarandon) for one reason or another. He may not want this to get to the point it does, but for much of the film, he’s clearly working on this resurrection and actively seeking out the knowledge to accomplish it.

The film begins with a bloody scene at an insane asylum where we are told that Charles Dexter Ward has escaped after brutally killing and decapitating an orderly. From here we doodley-doop back in time to the point where Charles Dexter Ward’s wife Claire (Jane Sibbett) hires private detective John March (John Terry) to investigate her husband’s disappearance and strange behavior. What this means is that we aren’t really going to be seeing this story through the eyes of Ward himself, but through those of March, who is trying to figure out exactly what Ward has been up to.

So what do we learn? We learn that Ward has been receiving shipments of the bodies of long-dead people, all of whom were reported to be wizards. We learn also through a diary of Ezra Ward that Charles Dexter Ward is actually a descendant of Joseph Curwen, who was eventually destroyed for dabbling in arts better left untried. Eventually, we discover that Ward has been attempting some of the experiments he has found in bringing back people from the dead, and that once someone has been resurrected, they are afflicted with a terrible, insatiable, cannibalistic hunger. All of that is good stuff for a horror movie, of course.

The biggest problem with The Resurrected is that it falls prey to a lot of movie tropes, and not just tropes of the horror genre. For instance, John March has an assistant named Lonnie (Robert Romanus). Lonnie is useful in a lot of places, does a lot of the legwork, and is the closest thing we have to comic relief. If you had to take bets on whether or not Lonnie made it to the final credits, how would you bet? My guess is that you’ve placed your bet in the right way. I spent a good portion of the film not wondering if Lonnie would be killed by some monstrosity from beyond the grave but when and how.

There is some gore, and some of it is pretty good. Some of it is spectacularly cheap looking, though, which is sad for a movie that had the equivalent of about $11 million in its budget. It’s more interesting to me to see the directorial efforts of Dan O’Bannon, who is best known as the guy who wrote Alien. Suffice to say that this was far less impressive all the way around than was Return of the Living Dead.

This is an easily skipped movie. You’re not really getting much interesting here that you can’t get elsewhere. It’s a shame, because someone has to be able to put together a genuinely good movie based on Lovecraft’s work. There are some that are better than others, but most of them seem to wallow in the sort of sad genre position as The Resurrected.

Why to watch The Haunted Palace: Vincent Price in his horror prime.
Why not to watch: Some truly cheap and unintentionally funny cosmetic effects.

Why to watch The Resurrected: Lovecraft in an era more likely and willing to show gore.
Why not to watch: It’s honestly not very good.