Off Script: Wasting Away (Aaah! Zombies!!) 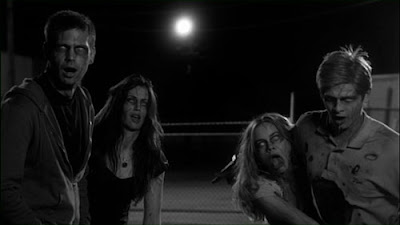 Ah, the zombie subgenre. It’s all been done, of course. There have been serious ones, funny ones, and even romantic comedies (zom-rom-coms, if you will). Wasting Away, (sometimes called Aaah! Zombies!!) is a comedy with a touch of romance fully centered on the zombie subgenre of horror films. It’s also a film from the perspective of the zombies themselves. In fact, in this case it’s focused on a group of people who are not just zombies, they’re not aware that they are zombies. It’s a fun idea. Unfortunately, there’s not enough here to sustain an entire film.

The movie starts with a military test of a super soldier serum that backfires, killing the subject and turning him into a zombie. Because the serum is a failure, the military decides to get rid of it, but the men charged with transporting the serum get lost and a barrel of it falls off the truck. This barrel leaks, tainting a batch of ice cream mixture that is then eaten by our four main characters: slacker Mike (Matthew Davis), ambitious Vanessa (Julianna Robinson), bowling alley assistant manager Tim (Michael Grant Terry) and dippy Cindy (Betsy Beutler). Tim has been carrying an evidently requited torch for Cindy for years. Anyway, the four eat the tainted ice cream, which turns them into zombies.

The conceit of Wasting Away is that none of them know that they are zombies. When we are seeing a scene from their perspective, the film is in color. When we are seeing something from the perspective of a non-zombie, it’s in black-and-white. The other part of this conceit is that our quartet of zombies acts completely normally in terms of how they see themselves. However, because they are zombies and slow, the rest of the world is sped up from their perspective. Normal humans are essentially fast-forwarded, speaking too fast to be understood and moving too fast to be caught.

Eventually, the four zombies meet Nick Steele (Colby French), a soldier who has a little bit of knowledge of the super soldier project. He’s also infected and doesn’t know it. In fact, he’s convinced that the five of them have become super soldiers while everyone else has become infected. He tries to get the others to work with him to stop what he thinks is an ongoing plague when, of course, the five of them are actually the cause of the plague.

The problem with Wasting Away is that it really only has the one joke. We have a group of zombies that don’t know that they are zombies and can’t figure out that they are zombies despite the massive amounts of clues they are given. They lose body parts, for instance. Tim’s entire scalp falls off. They are able to withstand being shot in the chest. Mike discovers a taste for human brains, which he eats in a variety of ways including brain tacos and brain margaritas. When Tim and Cindy go to visit her parents, they aren’t thrown off by the booby traps and the giant anti zombie sign on the front door.

This is all a problem for me. Watching dumb characters be dumb isn’t entertaining; it’s expected. There’s no real pleasure for me in seeing stupid people do stupid things, and make no mistake—these are some supremely stupid people. Additionally, Cindy as a love interest for main character Tim makes no sense to me. Cindy is completely unappealing as a person. She is stupid even before becoming a zombie (she gets stuck in a mouse glue trap and we’re led to believe this is not an uncommon occurrence). She’s also babyish. When she turns into a zombie, she doesn’t complain of a stomach ache but says that her tummy hurts. When she tries to rescue a cat at one point, she calls it “Kitty Meow Meow.” What is she? Five?

I’m really disappointed with Wasting Away because the basic idea is a lot of fun. The one joke here isn’t enough to carry the entire film because not enough is done with it. It’s watching the same basic scene over and over. The zombies encounter people. The people react and freak out. The zombies can’t figure out why. Repeat until they finally figure things out.

There’s possibly some truth to the idea that without this as a starting point we may not have gotten a film like Warm Bodies that comes from the zombie perspective, actually has some good jokes in it, and has a genuine romance angle that really works. Sadly, Wasting Away is evidence of what can happen when someone has a really good idea but then doesn’t have enough to really pull it out in a satisfying way. The truth is, the last half of this was a chore to get through.

Why to watch Wasting Away: It’s a unique perspective if nothing else.
Why not to watch: It doesn’t have the chops to exploit its one good idea.