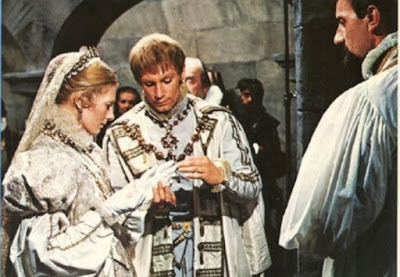 I can’t say I was overly thrilled at the prospect of watching Mary, Queen of Scots. While it’s clearly a different story from Anne of the Thousand Days, I figured it would roll pretty much in the same basic territory. The story here is of Mary Stuart (Vanessa Redgrave), queen of Scotland and, according to some, the rightful monarch of England instead of her sister, Elizabeth I (Glenda Jackson). I’ve seen bits and pieces of this, of course. Plenty of movies have touched on this subject, perhaps none that I’ve seen as much as the two Elizabeth movies with Cate Blanchett. Regardless, I figured on a lot of flowery language and dry history.

How wrong I was! Mary, Queen of Scots is filled with intrigue, plots and counterplots, murder, and betrayal. There’s also a bit of romance, religious wars, infidelity, and a lot more. It’s backed up with a great cast who all appear to really buy into the roles and the period—no real shock that this was nominated for (among other things) Best Costume Design. It’s a fairly sumptuous film in a lot of respects, and in looking the period, feels authentic in a lot of ways.

I won’t rehearse the entire history of Mary here because, well, that would probably take the rest of the review. Mary starts the film as the wife of Francis II of France. Francis doesn’t survive long, though, and Mary is sent back to Scotland where she is already queen by right of birth and now hopes to rule in reality. However, there are problems. The main problem is that she is a Catholic and Elizabeth, who sits on England’s throne, is a Protestant, and more specifically, the head of the Church of England established by her father, Henry VIII. The plots begin with James Stewart, Lord Moray (Patrick McGoohan) telling Elizabeth that Mary will rule in name only and he, her half-brother, will actually rule despite being a bastard child and thus unfit for the throne.

Much of the plotting stems from Elizabeth, who refuses to acknowledge a Catholic suitor for Mary’s recently-widowed hand. Instead, she sends her own consort, Robert Dudley (Daniel Massey) as a potential husband. Dudley is a Protestant, of course, and also of low birth, which makes him a bit of an insult. He’s also keen to marry Elizabeth himself. Elizabeth, though, is smart enough to also send along the young, dashing, and Catholic Lord Darnley (Timothy Dalton), with whom Mary soon becomes infatuated. She marries him instead (as Elizabeth has planned) only to discover that he is desperate for power and something of a coward.

Plots continue, and just about everyone plots against everyone else. In fact, Mary’s only real friend is Lord Bothwell (Nigel Davenport), whom she eventually marries. Another friend is Davie Riccio (Ian Holm), an Italian singer who is actually Mary’s pipeline for information and communication with other Catholic monarchs on the European mainland. The Scottish nobles aren’t happy under Mary’s reign, though, and eventually plot with Darnley to have all of the Catholics in Scotland killed or removed, including Mary.

And so it goes. We get exile, imprisonment, murder, and plots for murder in abundance. The movie runs a bit over two hours, and all of that time is really needed because of the complexity of what is happening. Everyone switches sides from moment to moment. People who have been at each other’s throats and moments away from killing each other are suddenly forced into positions where they must work together and be, at least temporarily, allies. All of it is really a power struggle for the English throne. Mary claims it by right of being the child of Henry VIII, claiming that Elizabeth is a bastard child of an improper marriage. Elizabeth, of course, wants to keep the throne but is wary of having a fellow queen assassinated for fear that the same could easily happen to her and could turn Catholic Europe against her.

I find myself in a very strange position when it comes to the actual performances, though. Vanessa Redgrave is the nominated actress here, and I think she’s the wrong actress. I’m in the strange position (for me) of saying that the better performance here by far is that of Glenda Jackson, an actress for whom I don’t have a great deal of affection. Jackson is commanding as Elizabeth, and memorable in every scene and moment. She shares two scenes with Redgrave and is clearly the more compelling of the two in both scenes.

Redgrave, on the other hand, is flighty and histrionic. I’m certain that this was expected of her and might even be historically accurate, but it’s often played to the back seats of the theater and it doesn’t always translate well. There’s nothing particularly wrong with her performance, except that, leaving out a couple of scenes, there’s nothing particularly memorable about it. Mary simply isn’t that compelling; it’s the events around her that are.

Those events are really the reason to watch this. The history, all of the plotting and maneuvering, all of the murder and switching sides, is so interesting. Mary, Queen of Scots is complex by design, but no so complicated that it isn’t easy to follow. While we don’t always know where everyone stands, we can follow the twists and turns and we understand the betrayals when they happen.

The truth is that I probably wouldn’t nominate Redgrave here, but I’d strongly consider a nominate for the screenplay and potentially one for director Charles Jarrott, who manages to keep all of many threads both distinct and yet meshed with all of the other plots. This could have been a mess, and it isn’t thanks to Jarrott.

This is well made. It’s smart, it’s interesting, and a great deal of it is based on the real history. What more could you want?

Why to watch Mary, Queen of Scots: It’s a damn good story.
Why not to watch: Vanessa Redgrave’s wildly histrionic peformance.