Film: Lord of Illusions
Format: Streaming video from Hoopla Digital on The Nook. 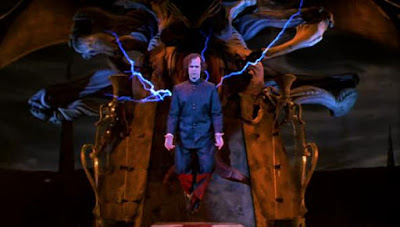 Lord of Illusions is one of those films that I’ve probably seen more times than I need to. I think everyone has a movie or two like this that gets put on in the background or they get stuck watching for a fifth time for no good reason. I don’t dislike Lord of Illusions even if I always end up a little disappointed in it. There are some really interesting ideas here, something it has in common with a lot of movies based on Clive Barker’s stories, but it either lacked the budget or the technology or the time to really exploit those ideas well.

Harry D’Amour (Scott Bakula) is a private detective who apparently has a number of run-ins on the supernatural side of things, at least based on the fallout from his latest case involving a child who was possessed by…something. He’s given a new case, a simple one involving insurance fraud, that takes him to Los Angeles. In the course of his investigation, he comes across what appears to be a ritual murder. He’s soon hired for a new case, tailing a well-known illusionist named Philip Swann (Kevin J. O’Connor). The twist here is that Swann’s wife Dorothea (Famke Janssen) has hired him and there are hints that Swann is something more than a simple stage magician.

D’Amour takes the case, goes to see one of Swann’s shows, and sees the man killed on stage when a prop malfunctions. Naturally, this takes D’Amour deeper into what may have been happening, especially when he finds himself assaulted by the same people who he discovered at the ritual murder scene. A little digging reveals that Swann was once involved with a cult run by a man called Nix (Daniel von Bargen), who had evidence of real magical powers as well. Swann did something to kill Nix, but Nix might not be really dead and might also be coming back.

So, like any good horror movie that wants to bring up some big ideas, there’s a lot to unpack here. Lord of Illusions plays like a horror noir with a number of twists and turns and elements slipped into the plot. This works to the film’s benefit but also to its detriment. In some ways, it feels like Lord of Illusions is a film in a part of a larger series, even if it isn’t. There are things that feel like they have a back story—D’Amour’s elaborate back tattoo, for instance, that simply aren’t explained. In terms of world building, that’s really interesting, since it feels in some respects like a real world. It works against the film in the sense that there ends up being a lot that isn’t explained.

The ideas here are really interesting and tap into the same sort of ideas that Clive Barker seems to like a lot. There is a real magic at work through the film, but it’s interestingly tied to stage magic and the sort of world of illusion. Because of this, there is a sense in many places that what we are seeing could be the real thing and could be just a trick, and there are plenty of tricks.

I like the ambition here. Lord of Illusions wants to create an atmosphere where we are living in a world that includes people who are truly malevolent and have true power. Nix, who appears at the start of the film and then shows up again at the end (I mean, that’s not much of a spoiler, right? You knew he was going to come back) casts a huge shadow over the entire running time because he is so well established in the opening sequence.

The real issue with Lord of Illusions is that the effects are really poor. That seems off for a film that had a $12 million budget in 1995. Several effects, particularly a demonic thing that attacks D’Amour and Dorothea, are so obviously computer generated and pasted over the film that they become laughable. This is also true of the visions that Nix inflicts on people—they look weird and pasted on, and my guess is that they were probably a lot more expensive than they should have been. That’s a shame, because there are some really good practical effects and make up in the film that work completely.

Ultimately, Lord of Illusions suffers from the same problem a lot of films directed by Clive Barker and/or based on Clive Barker’s writings do. There are a lot of ideas here that are really interesting, but film doesn’t seem to be a good medium for really digging into these ideas. Barker feels like an author who needs to be encountered in print rather than visually. He needs a lot of explanation, and the evil he wants to get to, what seems to be running the world that Barker wants to portray, requires too much exposition to really work in film.

I like Lord of Illusions, but I always want to like it a little more than I actually do. The Director’s Cut adds about a dozen minutes, and it’s a dozen minutes that end up really helping the film overall. If you’ve got a choice and you’re willing to take a chance, go for that one, because it gets a little deeper into Nix’s cult, and that ends up being helpful for the whole narrative.

Why to watch Lord of Illusions: There are some really intriguing ideas here.
Why not to watch: The effects are laughable, even by 1995 standards.