Hello, I Love You, Won't You Tell Me Your Name 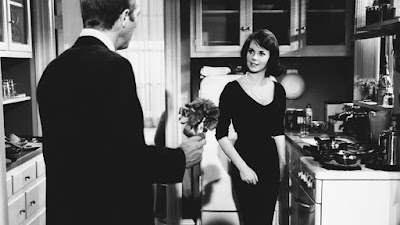 I’ve been ignoring the DVR lately, and that’s kind of a mistake. The unit I have is nearing the end of its life expectancy, and there are a half dozen or so movies that I’ve had trouble locating stored on it. I’d love to say that there was a good, solid reason why I watched Love with the Proper Stranger today other than that, but there isn’t. Honestly, this is going to be a common refrain for the next couple of weeks as I get rid of the last remnants of what I have recorded. Suffice to say that based on the title I wasn’t too excited and that beyond knowing it starred Natalie Wood and Steve McQueen, I knew nothing going in.

Here’s the set up: Rocky Papasano (Steve McQueen) is a musician looking for work one day at the union hall when he is paged to the front. Here he meets Angie Rossini (Natalie Wood), a woman he had a one-night stand with some time earlier. Angie is pregnant and isn’t expecting Rocky to marry her, but to at least help her locate a doctor to help with the little problem. Rocky is naturally surprised by this and she storms out, but he tracks her down to her job at Macy’s and tells her that he’s located someone for her. What he doesn’t tell her is that he has located someone through the auspices of his some-time girlfriend Barbie (Edie Adams), whose apartment he sometimes stays at.

The problem with Love with the Proper Stranger is that it has a significant problem with tone. The first two acts of the film are very dark and upsetting. The fact that this is a film that touches even a little on the topic of abortion in 1963 is rather surprising, especially since this is a solid decade before Roe v. Wade. This means that the abortion scene is essentially a back alley procedure done by someone who isn’t a doctor, which is precisely why Rocky breaks into the room and takes Angie out before it happens. It’s almost oppressive in just how heavy this gets for a few minutes, and a great deal of it is sold by McQueen’s best work in the film and a great performance (throughout, but especially here) from Natalie Wood.

Shortly after this, Rocky has a run-in with Angie’s brother, and sporting a black eye, offers to marry her despite his not really wanting to get married. It’s here that we get an early girl-power moment. Angie sees this as her opportunity to make a break from her current life. She moves out of the apartment she shares with her mother and three brothers and gets her own place, because she turns down Rocky’s proposal, not wanting to be stuck in a marriage neither of them really want. It’s here that the movie starts to shift in tone.

What happens is this: Angie decides that she can’t really have the baby on her own, so she more or less pursues a restaurant owner named Anthony Columbo (Tom Bosley) who has been interested in her in the past. She’s decided that security and stability is a good substitute for romance (what she calls “banjos and bells”). But, at the same time, Rocky has decided that he likes her, and she seems to have some feelings for him despite turning down his marriage proposal. So, in the last 20-30 minutes of the film, we have to go from a creepy back room abortion to a lighthearted romantic comedy complete with a “they’re falling for each other so they have a big argument” scene followed by a goofy rom-com gesture to wrap it all up.

It’s a shame, because it all feels like a cheat. When I do a review, I’m very specific with the tags I use for each one. In addition to the name of the film itself, I include the director(s), any Oscars it was nominated for, and genres. This is one I have listed as both a drama and a comedy. The drama is the first two acts. The comedy is the third, and the two never really cross paths. It almost feels like two films, or a “very special” episode of a sit-com followed by a normal one.

What this means for me is that I have some issues with this nominated for Best Original Screenplay, because the biggest problem in the film comes directly from that screenplay. The other nomination with which I’m concerned, Natalie Wood’s, seems a lot more warranted. Wood was capable of really intense dramatic turns and often seemed to play characters like Angie who were significantly troubled in some way and fighting through it. I like Wood’s performance a lot. I tend to like Steve McQueen, too, but he feels a little miscast here. McQueen was a good enough actor and generally cool enough to pull off a role outside of his wheelhouse like this one, but I’m still not convinced he’s perfect for the part.

Ultimately, Love with the Proper Stranger starts out to be almost a social commentary and ends as something that has the emotional depth of a saucer. That’s depressing, because if it had stayed with its original tone, it would have stared June off with a real bang. My guess, although it is just a guess, is that this might be why this film seems to be relatively unknown.

Why to watch Love with the Proper Stranger: Natalie Wood.
Why not to watch: The third act doesn’t fit with the first two. At all.