Films: In America
Format: DVD from NetFlix on laptop. 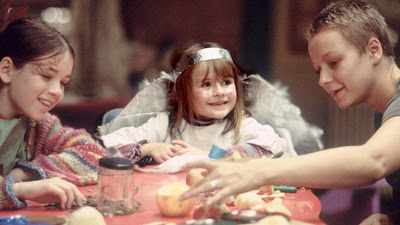 Jim Sheridan is a fine director. I’ve liked his movies that I’ve seen in the past, so in that respect, I was looking forward to In America. For some reason, I pegged the time frame of this movie all wrong. I knew that this was an immigrant story, but that’s really all I knew. I expect that this would be similar to most of the immigrant stories that I’d seen and that we’d be somewhere in the late 19th or early 20th century. That’s not the case, though. We’re firmly in the early 1980s with our immigrant clan coming from Ireland through Canada to New York on a visitor’s visa.

Our family consists of four people and the intense baggage of a fifth. Johnny (Paddy Considine) is an actor hoping to make it on stage in New York. Wife Sarah (Samantha Morton) is a school teacher, but can’t find work as a teacher in New York, so instead gets a job at an ice cream parlor near the family’s low-rent apartment in a building filled with addicts and drug dealers. The children are Christy (Sarah Bolger) and Ariel (Emma Bolger, Sarah’s real-life sister). The fifth member of the family is Frankie, the son who has died from a brain tumor. This fact weighs heavily on the entire family, of course, but the hardest on Johnny, who has essentially locked off his emotions so as not to deal with his son’s death.

Much of the plot revolves around the family’s struggles with money. When the girls need tuition for Catholic school, Johnny, unable to get work as an actor, gets a job driving a cab. Things become tenser when Samantha becomes pregnant and the pregnancy is a troubled one, requiring that she be hospitalized. In and among all of these various events, the problems and the minor triumphs and victories, the family meets Mateo (Djimon Hounsou), an artist who lives in their building and who prefers to have no contact with the outside world. He comes into their lives when the girls go trick-or-treating in their building and force him to open his door to them.

Mateo is his own tragic story. Keeping in mind that this all takes place in 1982, having a character who is suffering from AIDS is probably a natural place to go. In Mateo’s case, it is implied that he contracted the virus through a blood transfusion before the world knew that the blood supply was not safe. Mateo is enchanted by the two children and is himself enchanting for Sarah, and proves to be in some ways more supportive than Johnny, who has become so emotionally distant.

In America ends with one of those confluence of events plot devices where just about everything happens at the same time. I won’t go into detail, because this is the entirety of the third act of the film, and that’s not really something to spoil.

The film does some things very well. Primarily, it creates characters that are interesting and worth spending time with. I like all of these characters pretty well. Johnny might be the hardest to like, but he’s also the one who is the most troubled and the one who, outwardly at least, is dealing with the most.

The other place were In America excels is in the performances. The five main performances are all at least very good and some are excellent. The problem I have here is that it’s a very good performance that was nominated for one of the main awards and not one of the excellent ones. The film really depends on two of the five main performances, those of Paddy Considine and Sarah Bolger. As Johnny, Considine needs to be relatable in everything he does. Whenever he tries to do something for his family, we need to feel it, and we need to feel his disappointment and frustration as well as the emotions he keeps locked inside, unable to let them out. In almost every way, this is Considine’s film. Second only to him in that respect, and by only a hair’s breadth, is Sarah Bolger, who, in addition to being a 10-year-old girl, is also the film’s narrator. In America is told through Sarah’s eyes, and who is just old enough to understand a part of what is going on and why some things can’t really be told to younger sister Ariel.

It’s worth noting that Emma Bolger as Ariel has in some ways the easiest and most difficult job in the film. She’s a young child and has to be a young child, and she is perfectly natural and endearing. Ariel is a cute kid, and Bolger is really good as Ariel.

Despite this, it was Samantha Morton and Djimon Hounsou who were nominated. I get Hounsou’s nomination. He’s generally good in whatever he’s in, and Mateo is, like our Irish family, real and believable. He’s a fascinating character, dealing with a strong desire to live and knowing that he is doomed to die. Morton is good as Sarah, but she’s just good. She’s in the movie less than the rest of her family, and while she has a few solid scenes, she’s merely good in the role. I like Morton; I think she’s an appealing actress, and I like her despite her “I was just in Minority Report” haircut and thus seems a little out of place. She’s also the least sympathetic of the five main characters, although that’s not specifically Morton’s fault.

I liked this almost in spite of the third act. This is entirely based on the performances and on the strength of the characters and the portrayals of them.

Why to watch In America: For whatever the reason, these are people to root for.
Why not to watch: The third act.