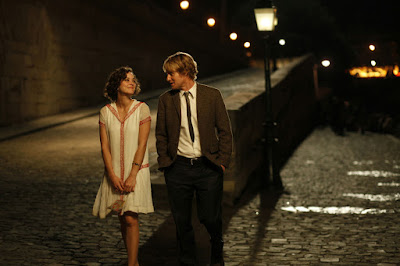 When Woody Allen is on, there aren’t many people who are better. Allen’s stories have a distinctive style to them and a particular flavor. When he’s able to restrain himself from getting too crazy, his screenplays are some of the best in the world. When he doesn’t restrain himself, he’s prone to fall deep into his own navel. The track record is a good one, though, so it’s probably strange that it’s taken me this long to get to Midnight in Paris. It might have been the presence of Owen Wilson that kept me from wanting to watch it. I’m not much of a fan of Mr. Wilson in general. I find him tolerable at best and insufferable at worst.

I’ve said before that Radio Days is my favorite of Allen’s screenplays. What I love about it is just how much it shows Allen’s love for the era he’s writing about. There’s such a wonderful rosy tint to everything in that movie. It has an adult’s knowledge and recollection, but still has a child’s view of the events. I bring this up specifically because where Midnight in Paris takes us is to a realization about that nostalgic view of the past.

I’ll hit the plot quickly, because if I spend a lot of time on it, this review is going to be longer than the film it’s about. Midnight in Paris isn’t considerably complicated, but there are a lot of people who pop in and out of it, which means you won’t be getting a comprehensive list of the impressive cast. Gil Pender (Owen Wilson) is a financially successful but creatively unfulfilled screenwriter. He’s in Paris with his fiancée Inez (Rachel McAdams) and her two ultra-conservative, extremely wealthy parents (Kurt Fuller and Mimi Kennedy). Gil has been struggling with the idea of giving up screenwriting and has been working on a novel, but he hasn’t really been able to find someone to give him real, constructive criticism.

In Paris, Gil and Inez run into Paul (Michael Sheen) and Carol Bates (Nina Arianda), friends of Inez. At Inez’s insistence, the two couples start seeing various things around Paris together. It’s soon evident that Paul is a pedantic pseudo-intellectual, exactly the sort of person who thinks he knows everything and who at one points gets into an argument about Rodin’s life with the tour guide at the Rodin museum. Gil, though, is just happy to be in Paris and wishes he could have seen it in its heyday of the 1920s, when influential writers and artists roamed its streets and bistros.

One night, at midnight, an old car pulls up and invites Gil inside. In this moment, Gil has been transported back to the 1920s, where he meets many of the people who were so influential in Paris at the time—Scott and Zelda Fitzgerald, Hemingway, Picasso, Dali, Bunuel, Man Ray, Gertrude Stein, Cole Porter, and a bunch more. This happens every night, and soon Gil discovers that he has become quite taken with Picasso’s latest mistress, Adriana (Marion Cotillard). The upshot of this is best handled in a spoiler. My guess is that most of the people who read this blog have seen this movie. If you haven’t Gil’s ultimate revelation (and thus Woody Allen’s) is best left unknown.

Adriana is obsessed with La Belle Epoque, thinking that the ‘20s are a dull period and that Paris was much better thirty years previous. While back in the ‘20s, Gil and Adriana are accosted by a horse-drawn carriage and find themselves in 1890, where the meet Lautrec, Gaugin, and Degas. All of them find their era to be stiflingly dull and wish they could have been around in the Renaissance.

It’s here that Gil makes his grand realization. The world we live in never seems as exciting as the world that came before us, because it’s commonplace and normal. We always romanticize the past and consider our own time to be dull and ordinary. While Adriana decides to stay in 1890, Gil returns to the present and gets his life in order, which includes moving to Paris and kicking Inez and her family to the curb.

It’s this realization that tied the film to Radio Days to me. In Radio Days, Allen is at his most nostalgic, looking at his own childhood as a kind of golden time where everything was good and perfect. Here, he realizes that he was idealizing that past, and that, like it or not, we have to deal with the present.

There are so many little subtleties that work perfectly in Midnight in Paris. As a piece of magical realism, it is nearly flawless. The transformation of modern Paris to the Paris of the past happens without fanfare. The clock chimes, a car pulls up, and we’re back. The characters in the past are vibrant and wonderful, and because he’s Woody Allen, he got great people to play important roles that are on screen for just a few minutes. Corey Stoll as Hemingway steals every scene he’s in and Kathy Bates is perfect as Gertrude Stein. But it’s Adrian Brody’s Salvador Dali, on screen for just a few minutes and obsessed with the idea of a rhinoceros who is perhaps the most memorable character outside of Gil.

Midnight in Paris is holy-shit good. It’s tonally perfect, and like few other movies before it, it shows Paris in all of its glory. I always like seeing Paris in a movie. It makes me want to go back there and spend a morning sitting in front of Café Neo eating a croque forestier watching traffic go by and then spend the afternoon wander around Cimetiere du Montparnasse looking for the graves of famous people. It makes me want to see Sacre Coeur again. Allen is also uniquely capable of creating characters like Paul and Inez’s parents who are blithely unaware of their own awfulness.

Midnight in Paris might be Allen’s best film. If it’s not, it might be his best comedy. At any rate, it belongs in that top tier of his canon. This is true even when it means spending 94 minutes with Owen Wilson.

Why to watch Midnight in Paris: Woody Allen doesn’t get better.
Why not to watch: It’s a rare instance where I could’ve handled another 10 minutes.