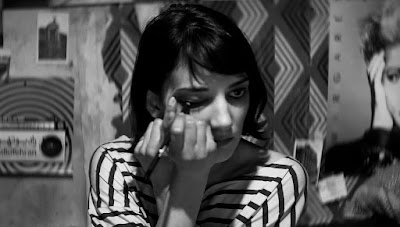 Every now and then, a movie shows up that becomes the flavor of the month. A Girl Walks Home Alone at Night was one of those movies for a little while, enough that I’d heard a great deal about it almost as soon as it appeared on NetFlix streaming. There are a number of things that make this an interesting film. First, it’s a modern black-and-white horror movie. Second, it’s a feminist vampire movie. Third, it’s a feminist vampire movie that is in Persian and was written and directed by an Iranian woman. Sure, it was filmed in California, but there’s a lot going on here that seems to be aimed at screwing with those in religious authority in a large part of the world.

This is an unusual movie even beyond all of the things that make it an unusual movie in terms of what it is. Since we’ve got a vampire here, this is at least marginally a horror movie and the truth is that it doesn’t ever really get that far away from being marginally a horror movie. It’s a lot closer to social commentary, specifically on feminism, than it is on anything else. There are only a couple of actual vampire attacks, one of which is pretty brutal. Instead, this focuses more on the characters and the lives they live in a place known as Bad City.

We don’t start with much of a vampire film, actually. Instead, we’re dealing with Arash (Arash Marandi), a young Iranian man who does some sort of work for a wealthy family. Arash’s problem is his father, Hossein (Marshall Manesh), who has become a heroin addict. Because of his addiction, Hossein is greatly in debt to Saeed (Dominic Rains), a drug dealer and pimp, who takes Arash’s prized car as collateral for all of the money he is owed. The next day while at work, Arash steals a pair of diamond earrings from Shaydah (Rome Shadanloo), the daughter of his employer. His intent is to use the earrings to get his car back from Saeed.

Unfortunately for Saeed, he runs into the eponymous and otherwise unnamed girl (Sheila Vand), who walks the streets at night. The girl is a vampire, which she demonstrates to us by first revealing her fangs, second by biting off Saeed’s finger, and third by killing him in that classic vampiric way. As she leaves, Arash has arrived to get his car back. He finds a dead Saeed, so he takes his car key and leaves, taking Saeed’s briefcase of drugs and money as well.

What follows is a slow development of something like a relationship between Arash and the girl. Additionally, Arash deals with his junkie father by throwing him out, and the girl deals with him by killing him while he is in the company of Atti (Mozhan Marno), a prostitute working for the late Saeed. Arash is naturally tentative around the girl since he’s pretty sure she killed Saeed and eventually convinced that she may have killed his father as well. And then the film ends.

What’s naturally interesting here is that this is an Iranian film that puts virtually all of the sexual power into the hands of the women. Additionally, the girl walks the streets in a chador—a traditional female outer garment—while the other women wear Western clothing and appear not to be concerned about what is generally assumed to be customary clothing. In a sense, the girl is representing the traditional while countering the traditional at the same time. It’s subversive in that respect, which is one of the things I rather enjoyed about the film.

It is difficult to call this a horror film, though. The body count is surprisingly low for a horror movie, and while the death of Saeed starts out pretty graphic, there’s not much else in the film that would qualify as typical horror fare. It’s far more about the society that these characters live in. It’s a dark place and no one seems really innocent. Even the young boy (Milad Eghbali) who shows up in several scenes may not be as innocent has he appears.

This is an unusual movie, and not one that is that easy to parse. It’s a movie that I think I probably need to watch again, perhaps more than once, to really dig into what is there. At the very least, I find it incredibly intriguing, and I’m very interested in seeing what director Ana Lily Amirpour does from here. The world needs more good and interesting female filmmakers, and Amirpour looks like she’s poised to join that company.

I can’t fully explain why I find this as interesting as I do. I’m kind of okay with that, but I definitely want to go through it again.

Why to watch A Girl Walks Home Alone at Night: It’s a unique experience.
Why not to watch: It’s not much of a horror movie.

Posted by SJHoneywell at 1:43 PM