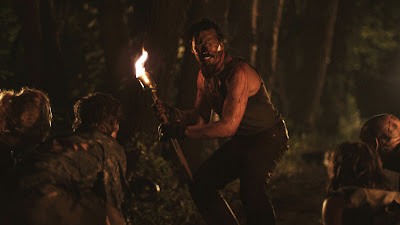 I promise I won’t get maudlin here. Many of us, even this far removed from the event, still miss the presence of Chip Lary. As it happens, Stake Land was the last review Chip ever posted, and it was a film I asked him to watch. Truthfully, Chip didn’t like the film as much as I do or nearly as much as I would have liked him to. This is a film that I genuinely enjoy. Stake Land isn’t a perfect film by any stretch of the imagination, but it gets a lot of things right. It also does a nice job in rewriting many of the tropes of a well-established genre, and also manages to create a believable and interesting post-apocalyptic world.

The monsters in Stake Land are vampires, but these are not the typical blood suckers. The classic vampire has a sense of romance about him. The original Dracula was certainly a romantic character. Even most of the violent and bloody vampires from the films have a certain sex appeal to them. Of course, in the past decade or so, vampires have become genuine love interests. In Stake Land, the vampires are feral. They are classic vampires in the sense that they die when staked in the heart or exposed to sunlight, and they feast on blood. That’s where the similarities stop. These vampires are feral, essentially blood-sucking zombies, operating on instinct and attracted to the scent of blood, but unable to think their way out of even simple traps.

The film starts when the vampire plague is already in full swing. A young man named Martin (Connor Paolo) is rescued from a vampire attack that kills his parents. The man who rescues him goes by the name Mister (Nick Damici). Mister is a true vampire hunter, killing as many as he can and claiming their fangs as trophies and as a sort of currency in the modern world. Mister and Martin make their way through the wasteland of the United States toward Canada, redubbed “New Eden,” since the cold-blooded vampires are unable to travel well in cold weather.

Along the way, Martin and Mister encounter small pockets of humanity. They also encounter a great deal of inhumanity. A nun, referred to only as Sister (Kelly McGillis) is rescued by Mister from a pair of rapists who he unceremoniously kills. Sister joins the group and is not keen on Mister’s methods, but also realizes that she is safer with someone who can protect her. Sadly, shortly after the rescue, the trio is captured by a group called the Brotherhood, an apocalyptic religious sect headed by a man named Jebedia Loven (Michael Cerveris). It turns out that one of those rapists was Loven’s son.

Ah, but since this happens early in the film, this is really all about the set-up. Mister and Martin escape and continue north, careful to avoid any additional run-ins with the Brotherhood. In a small community they pick up Belle (Danielle Harris), a pregnant girl who wants her child born in the north. They also meet Willie (Sean Nelson), an ex-marine who was being used as vampire bait by the Brotherhood. As a collective of five, the group continues to move northward, but it soon becomes clear that the Brotherhood has not forgotten them and that there is a real and dangerous pursuit.

Stake Land really only gets one thing wrong in my opinion. The final confrontation, the one that is going to be the climax of much of the story, happens far too quickly, and is over almost as soon as it begins. For a film that works on a number of levels and builds the story in a number of interesting ways, this final battle comes across as insubstantial and not very satisfying. It’s not bad; it’s just far too short.

On the other hand, Stake Land does a lot right. One of the things it does better than most films of this type is create a real post-apocalyptic world. This looks a lot like what the world could and would look like after a complete governmental and societal collapse. The fortress towns, the barter economy—all of this rings true. It’s a great bit of world-building and it’d done economically and quickly, and more importantly, it’s seamless for the rest of the film.

I also like the characters. The relationship between Martin and Mister is interesting because it’s as much mentor/student as it is father/son. Mister is the classic action movie hardass, unable to really show any emotions in his speech. He’s a man of action, and so all of his emotional moments come not in what he says but in what he does for Martin. This is in many ways a hero’s journey, but that journey is shared by both Martin and Mister.

I also like that we get very little backstory. We know nothing of Mister’s past, only that he is a vampire slayer and that he is really good at it, although far from super human. In that sense, Stake Land is about as believable as a movie featuring zombie-like vampires could hope to be.

Why to watch Stake Land: A great rewrite of the vampire mythos.
Why not to watch: The big showdown happens too quickly and feels unfulfilling.