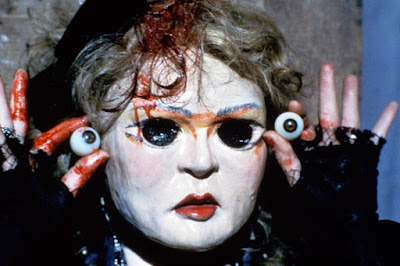 There have been a number of movies that feature creepy dolls. Old movies like The Devil-Doll from the ‘30s, another of the same name (minus the hyphen) from the ‘60s, the ventriloquist segment from Dead of Night, the ventriloquism-based movie Magic, the clown from Poltergeist, and of course the Zuni doll from Trilogy of Terror are all pretty memorable. These days, Chucky and Annabelle are probably the ones that jump to mind, although there’s certainly no shortage of such films. Is it the idea of the corruption of something that should be innocent? Whatever the reason, the modern turn of toy-based horror seems to have gotten its start from Dolls.

The truth is that I went into this prepared for it to be derivative in many ways of Child’s Play or even Puppet Master or Demonic Toys. The opposite is actually true, since Dolls was released before all of these. It’s tamer in a lot of respects. There’s a much bigger dose of fantasy in this film, and while there is a body count, it doesn’t really amp up the gore that much. This came with an R rating when it was released, and it might just struggle down to a PG-13 released today.

Anyway, stop me if you’ve heard something like this before. David Bower (Ian Patrick Williams), his nasty second wife Rosemary (Carolyn Purdy-Gordon, wife of director Stuart Gordon), and David’s daughter Judy (Carrie Lorraine), are driving in the ass-end of nowhere when a storm brews up and the car gets stuck in a ditch. The trio finds a house nearby, and getting no answer to their knocking, sneak in through a window. They are then confronted with the house’s owners, Gabriel (Guy Rolfe) and Hilary Hartwicke (Hilary Mason). Shortly thereafter, a dumpy American named Ralph (Stephen Lee) and two punk girls named Enid (Cassie Stuart) and Isabel (Bunty Bailey, best known as “that girl from the A-Ha video”) show up as well.

So, let’s go over that set-up again. Creepy old house, check. Creepy old couple, check. Rainstorm, check. It turns out that Gabriel is a dollmaker, which also means that the house is filled with dolls. Naturally, our six new arrivals are going to be our potential victims here, but Dolls is not standard slasher fare in this respect. It’s very much a modern fairy tale in that only the people who really deserve to get killed are going to get killed. This means that while young Judy and the still-filled-with-childlike-wonder Ralph might be in for a rough night, it’s the two thieving punk girls, the assholish father, and the epically evil stepmother (she throws Judy’s teddy bear into the forest at one point) are going to be in for a much more difficult evening.

Dolls is essentially 30 minutes of set up and just under 50 minutes of everything else. Our first attack by the evil dolls comes, in fact, just after the 30 minute mark. This is when things start to get interesting, in no small part because of some excellent stop-motion work on the dolls. Evidently, the release of this film was delayed for a good amount of time because of how much work was involved in animating the various dolls. It’s surprisingly effective, and not particularly jerky, even though it’s still pretty evident that it’s stop-motion work.

I said above that this is a fairy tale, and it truly is. The characters are mostly broad stereotypes, particularly that of Rosemary, who could not be more of a stereotype if she were drawn directly from Cinderella. The same is true of the two punk girls, particularly Isabel. In fact, I think Enid gets a raw deal, since she seems to be a potentially decent person under the makeup (and she has by far the highest kill streak of evil dolls). Ralph is a stereotype, too. He’s essentially a child in a man’s body. This makes the film something other than a true horror movie since none of the characters are particularly relatable in any way.

It’s not a bad film, though. Taken for what it is, it’s an entertaining movie that doesn’t really want to be much more than a broad morality tale. It’s a harsh lesson in keeping one’s inner child alive, and in a few cases, I’m not sure the punishment fits the crime. At its length, it feels insubstantial. It almost feels like it would be improved by pairing it down even further and dropping it into an anthology like Creepshow.

Still, the dolls themselves are pretty great, and the animation is surprisingly good. It’s worth it for that if nothing else.

Why to watch Dolls: Surprisingly effective animation.
Why not to watch: It’s not quite the horror movie it wants to be.