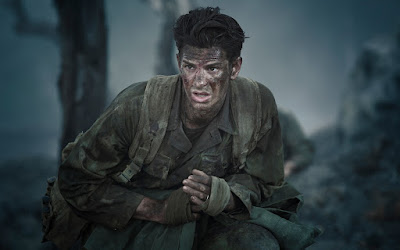 I can’t say that I was really looking forward to Hacksaw Ridge. Mel Gibson has demonstrated in the past that he can be an effective director, but he’s also demonstrated that he’s not unwilling to go over the top in terms of violence. I haven’t seen The Man without a Face, but I have seen his other four major releases, and all of them involve a great deal of bloodletting. Mel likes his violence a lot, and while I’m not shy about it, it can be overwhelming when it’s non-stop the way he seems to like it.

Hacksaw Ridge is the story of Desmond Doss, who was the first conscientious objector to be awarded the Medal of Honor. The film starts by showing us Doss as a young boy with his brother Hal. The two are fighting and Desmond smacks his brother in the head with a brick, nearly killing him. We learn eventually that it was not this particular act of violence that swore him off the use of firearms, but it will suffice for now. After this opening sequence, we see Doss (played through most of the film by a nominated Andrew Garfield) rescue someone trapped under a car and take an interest in the medical field.

It should be admitted that part of his interest in the medical field comes from his contact with Dorothy Schutte (Teresa Palmer), a nurse he meets on the day he brings in the injured man. Romance blooms, and suddenly World War II is upon us. Desmond’s brother Hal enlists, which enrages their father (Hugo Weaving). It turns out that Tom Doss served in World War I and lost his three best friends there. Eventually, Desmond signs up as well, but decides that his beliefs as a Seventh Day Adventist prevent him from carrying or even touching a weapon. He instead intends to be a medic.

Cut to boot camp where Desmond Doss soon becomes a problem for the platoon because of his unwillingness to shoulder a rifle. Sergeant Howell (Vince Vaughn) is more or less commanded to do everything he can to get Doss to quit. The commander, Captain Jack Glover (Sam Worthington) attempts to have Doss removed via Section 8, and otherwise supports the idea of pushing Doss out of the Army as quickly as possible. Even a beating at the hands of his fellow recruits doesn’t push him out, though. Eventually, when Doss is arrested for refusing a direct order, a court-martial is ordered, and Doss is allowed to stay on and complete medic training only by the timely intervention of his father with evidence that conscientious objector status is guaranteed by an act of Congress.

Flash forward to the war itself and Okinawa, which takes up most of the last hour or so of the film. The troops go up into a meat grinder, hence the nickname of Hacksaw Ridge. When the troops are pushed back and artillery is called in, Desmond Doss stays on top of the ridge and begins lowering wounded men down to the ground. While this seems pretty spoiler-y, it’s also not like the film hides the fact that this is what it’s about.

There are plenty of positives here. Andrew Garfield is better in this than he’s been anywhere else. That may not be saying much, but I can’t at this point say that his nomination wasn’t well-deserved for Best Actor. It’s a good and consistent performance all the way through. Garfield makes a compelling lead, and also a sympathetic one. It’s also a surprisingly good performance from Vince Vaughn, who, up to this point in his career, seems to have done very little other than just play Vince Vaughn.

It’s also well filmed. Gibson, as mentioned above, has a history of filming violence and often filming it on a grand scale. In this case, it served him well because the combat sequences are brutal and terrible, but never confusing or confused. That’s not easy to do.

It is however (and pardon the expression) overkill. It is as if Gibson set himself a challenge in taking the piss out of the opening scenes of Saving Private Ryan and attempting to do them one better. Because of this, the combat scenes in Hacksaw Ridge are longer, bloodier, more violent, and more bombastic than anything Spielberg ever dreamed up for his military magnum opus.

Gibson also has a penchant for showing the “not Mel Gibson” side of any conflict as something little more than subhuman savages. He did it with the British in Braveheart, with pretty much everyone in The Passion of the Christ, the bad guys in Apocalypto, and he does it here, too. The Japanese are inhuman monsters in this film, and I think we’re supposed to be especially enthralled or elated when we see hordes of them doused in flamethrower fire. Just as Oliver Stone dispenses his conspiracy theories with a hammer, Gibson moralizes with the same lack of tact.

Finally, and I admit this is more about me than about the film, Gibson can’t help from injecting the film with as much religion as he possibly can. Certainly some of this comes from the real story, but Doss’s crusade to rescue as many men as he can becomes something that is both God-inspired (as was evidently true) and God-ordained (in Gibson’s head). The story is impressive enough and powerful enough without resorting to putting all of the credit for the heroics on a higher power regardless of whether or not Desmond Doss felt that way. I would be remiss to not suggest that were this true and were Gibson’s deity responsible for Doss’s success, he must also be credited with the terrible situation that required it as well as the horrific loss of life in general from the surrounding events.

Hacksaw Ridge is good, but it’s just too damn much. It seems like it’s never going to stop. I wouldn’t be surprised to learn that combat is very much like that, but there’s a reason I never joined the military; it’s because I’d rather not experience that in first-person. Remove Gibson’s clear sabre rattling, and I’d be more favorable than suggesting that it’s worth it for the base story itself and to see Andrew Garfield step up in a big way.

Why to watch Hacksaw Ridge: A portrait in true courage.
Why not to watch: If you thought you’d experienced Mel Gibson’s violence fetish before, just wait.