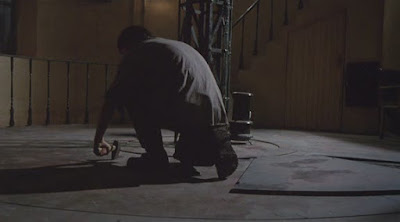 When a list of movies—any list—is put together by committee, I imagine there is some negotiation that happens. I give in on a movie you want that I don’t so that you’ll give in on a movie I want that you don’t. With the Fangoria list of under-seen horror movies, I imagine that happened quite a bit. Sure, there are some good movies on this list, some that are really worth seeing and truly are more unknown than they should be, but there are some real stinkers, too. That’s why I’ve put myself in a position to have to watch things like Lighthouse (sometimes known as Dead of Night , a name that is not uncommon for horror films in general).

I’m not going to hedge here: Lighthouse is intensely stupid. For a movie that’s supposed to be one of the best horror films I’ve never seen, it manages to play on every possible trope that exists in the genre. It’s unimaginative, derivative, and clunky, and looks 10-15 years older than it actually is. There’s very little to recommend it. I can imagine what the conversation about putting it on this list went like.

Listmaker 1: “I’m going to insist on putting Hell Night on the list.”

Listmaker 1: “Yeah, I know it does, but it was one of my first horror movies. I love it even though it’s terrible.”

Listmaker 2: “Fine. You can have Hell Night, but I get to include Dead of Night.”

Essentially, Lighthouse is what you would get if you wanted to make Alien3 but didn’t want to include any science fiction elements. A ship filled with prisoners is on its way to a remote island prison a la Alcatraz. Naturally there is a huge storm and the ship is wrecked near an equally remote lighthouse. Some of the guards and a few of the prisoners wash up on shore only to discover that one of the prisoners on board was a notorious serial killer who has evidently made it to land safely and has started picking everyone off one-by-one. Because this can’t be just a random serial killer movie, our killer has a penchant for stealing body parts. Once on the island, he decides on heads and with a machete he happened to find somewhere, he starts lopping off the heads of everyone he finds. And, because we can’t have an all-male cast, one person on the ship is a criminal psychologist named McCloud (Rachel Shelley), who has made a career of studying Leo Rook (Christopher Adamson), our serial killer.

I knew I was in trouble within the first two minutes. Our psychologist, in a black-and-white montage-ish scene, is shown discussing our serial killer and, more importantly, finishing up a manuscript on him. We get a flash of the title page of her book. It should be “A Mind of Evil: Leo Rook.” Instead, it’s “A Mind of Evil: Leo Rook?” I can take grammatical mistakes in movies when they have a purpose, but when the smart character “with letters after her name” can’t punctuate, I know we’re in for a rough ride.

You want tropes? I’ll give you tropes. Our killer walks as slowly as possible at all times and always manages to catch up to people running away. There isn’t a single kill here that isn’t telegraphed minutes in advance. The film switches to slow motion whenever glass breaks. Our psychologist has some connection to the killer beyond her “scholarly” work. The lone black character dies. One of the good guys is a prisoner (James Purefoy) who insists that he is innocent of the crime of which he has been convicted. That crime? Killing his wife, as in The Fugitive. The guy in charge of the prisoners is a domineering asshole who always has to be in charge about everything. The ending is straight out of an action movie and literally cribs moments from Die Hard and Dead Calm. More slow motion. More black-and-white flashback moments. More shattering glass. More things that happen by coincidence just at the right time so the killer manages to stay alive to keep killing. Blood dripping on people’s faces from above. A killer who dies multiple times only to not be dead. Believe me, I’ve only scratched the surface here.

Lighthouse is a complete waste of time. It’s not even so bad it’s funny. It’s just tedious, not scary, and irritating. Calling it Dead of Night is an insult to every other film (the 1945 British film, the 1974 Canadian film better known as Deathdream, and the Richard Matheson-penned made-for-TV anthology) that goes by that name.

Don’t waste your time. I wasted mine and I’m not happy about it.

Why to watch Lighthouse: You feel a need to see every movie that includes decapitation.
Why not to watch: It’s shit.