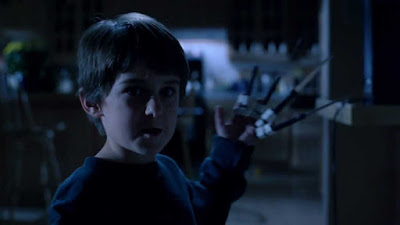 I love Wes Craven’s work. I think even now, two years after his death, we’re still figuring out just how much of a genius the man was. He created a bunch of really pivotal and important horror movies and franchises, not the least of which is A Nightmare on Elm Street. Let’s not forget, though, that he also made The Last House on the Left, The Hills Have Eyes, The Serpent and the Rainbow, and the Scream franchise. Wes Craven’s New Nightmare is one that seems to have slipped under the radar of a lot of people. I think it’s one of his best films. What Craven often did was create things that were completely new, things that took the genre in new directions. New Nightmare is a film that is both firmly in the heart of the horror genre and is also a smart commentary on the genre itself.

What I especially like about New Nightmare is that it does something that few films that are a part of a larger series can do: it stays completely within the established mythos of the series and also does something entirely new. This is what was attempted with Halloween III, and it took years for people to figure out that that movie was actually pretty good. Aliens did some of this, making a film that still had horror elements but was much more a science fiction action movie than the almost straight horror of the original. New Nightmare weaves a complicated story that exists both in the film world of Freddy Krueger and also with the film world of the actors who played in the original film.

So, instead of Heather Langenkamp playing Nancy Thompson, she’s playing a fictionalized Heather Langenkamp. In this world, she’s started to have a series of nightmares surrounding the Freddy Krueger mythology—pieces of special effects coming to life and killing people, for instance. She’s also been getting a series of threatening phone calls from someone who sounds like Freddy Krueger and who is singing the nursery rhyme from the first film. Additionally, her son Dylan (Miko Hughes) has started to act strangely and seems both fascinated with and terrified by Heather’s past filmography.

As it happens, in the film Wes Craven is working on a new Nightmare script despite Freddy finally being killed off for good in the sixth film of the franchise. Evidently, he’s been having nightmares himself, and the script is his way of exorcising that particular demon. We find out eventually that Craven is of the belief that the original films actually tapped into something, a sort of essential evil, that has become attracted to the films and has started to take shape in the real world. Since Heather played Nancy, the first person to defeat Freddy, it sees her as its target. Craven is writing the screenplay as a way to keep the demon trapped inside the film world, but with varying success. Not only are Heather and Wes having nightmares, original Freddy Krueger portrayer Robert Englund his having disturbing visions as well.

In a way, New Nightmare is a way to get the old gang back together and to have them play with their real-life personae and with their old screen roles. John Saxon, who played Heather’s father in the first film, plays himself here, and by the end of the film has reverted to the role of Don Thompson, essentially helping create a reality that allows Freddy Krueger to enter the real world. All of this naturally comes down to a final battle between the real Heather Langenkamp playing the film version of Heather Langenkamp playing the role of Nancy and this spirit of evil taking the shape of Freddy Krueger (played by Englund, but credited as Freddy Krueger) in a demonic dream world.

What I like about this is that it’s damn smart. In addition to being a pretty good horror film, New Nightmare is a commentary on the nature of horror films every bit as trenchant as Scream a couple of years later. In fact, Scream may well have been borne out of the same creative impulse as New Nightmare, since it covers similar territory, albeit with far less overt meta-filmmaking.

I’m not sure the film answers those questions and I’m not sure it’s supposed to. In fact. I rather like that it simply asks the questions. New Nightmare is a far smarter film than the average horror fan looking for knife wounds and decapitations might be prepared to see. For me, the fact that this offers some gory moments that flash back to earlier Nightmare films and does this in an atmosphere of asking real philosophical questions is fantastic.

The film world misses Wes Craven and it’s going to miss him for a long, long time. New Nightmare is the kind of film worth studying. Fortunately, it’s also the kind of film that is still rewarding without digging into it too deeply. It’s just further proof that Wes Craven was a better and smarter filmmaker than most of us ever gave him credit for being.

Why to watch Wes Craven’s New Nightmare: A near-perfect blending of the original ideas of the film series and a completely new twist.
Why not to watch: If you have a thing against meta, you’re going to hate it.