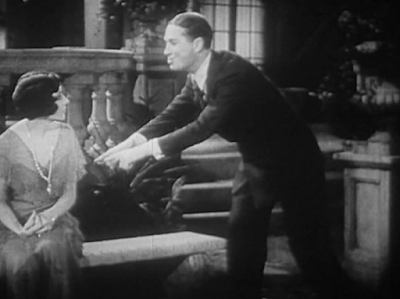 Finding movies on the internet, particularly those from the first few years of Oscar, is always a mixed bag. I’m never entirely sure I’m getting the whole thing. For instance, The Big Pond is listed at a spare 72 minutes but the only copy I could find ran just under 68 minutes. Are there really four minutes missing from the copy I found? Are those four minutes important? When you add to this the fact that my notes (yes, I keep extensive notes) list this film as being available only in an incomplete form, the anxiety grows a bit. That said, the movie did get to an actual conclusion, so my guess is that if I am missing something, it’s not critically important to the film.

We start in Venice where the fabulously wealthy Billings family is on vacation. Mr. Billings (George Barbier) is the sort of person who had movies made about him during the Depression. He owns a chewing gum factory, which essentially makes him the Wrigley of this fictional film world. His wife (Marion Ballou) is pretty much a non-entity in the film the follows, essentially here so that we have a wife one of our potential foils. Daughter Barbara (Claudette Colbert) is out when the film starts, much to the consternation of Ronnie (Frank Lyon), who has just arrived from the States. Ronnie works for Mr. Billings and is sort of engaged to Barbara. However, Venice has changed Barbara’s perspective on the world. She has been surrounded by businessmen (and chewing gum) her entire life. She wants romance.

This romance comes in the form of a guide around Venice, Frenchman Pierre Mirande (Maurice Chevalier). While Ronnie frets and Mr. Billings stomps, Pierre is pitching a serious case of woo at Barbara, who is only too happy to be on the receiving end. When they finally show back up at the hotel, Barbara tells Ronnie the romance is off for him and that she’ll marry Pierre. Her father is none too pleased, but comes up with a plan. He’ll bring Pierre to the States and put him to work in the factory to “help him make good.” In reality, of course, he’s going to try to run him out of the country.

Before you can say “Doodley-doodley-doop,” we’re in America and Pierre is trying to find his way. He’s given a room in a rundown boarding house as a way to start his bad American experience. However, the landlady speaks French and warms to him immediately. Once in the factory, he’s given the worst jobs, but takes to them, too. The fact that he can’t seem to stop working puts a small damper on his romance with Barbara, but since Ronnie has fed him a line about needing $20,000/year to get married (over a quarter million by today’s standards), he keeps working. He befriends Nat (Pat O’Day), initially set against him, and even take the fall for Nat when alcohol is discovered in the factory.

This leads to the happy conclusion, though, since some of the booze spills onto the gum. Pierre gets the brilliant idea of making booze-flavored gum, which soon becomes the latest craze, sending Billings’s gum company into the rarified stratosphere of companies who become household names. Hooray. However, since Pierre is now focused entirely on business, Barbara has lost a great deal of interest in him. Think he’ll figure out a way to win her back?

The Big Pond is interesting for a few things. First, it’s one of Claudette Colbert’s first roles, so it was before she was a major star, at least as far as I can tell. The real star, though, is Chevalier, who plays the sort of role here that he tended to play. Pierre is a never-say-die Frenchman, more continental and suave than 50 Americans, his love game always en pointe, and quick with a song. This is what Chevalier did and did well in general. While he was nominated for Best Actor, he’s not really asked to do much more than be Maurice Chevalier here.

The Big Pond is pretty straightforward. We’re never really that much in doubt of what the ending is going to be. We know that he’ll get the girl in the end and everything will end happily. That’s the nature of the beast. We’re also pretty sure that by the time the film ends, he’ll have figured out a way to make $20,000/year so that he can get married. What audiences wanted for the time was to have a laugh, see him be charming and French, and sing a couple of songs, which he does.

Here’s the thing--The Big Pond is pre-Code, but feels like it isn’t. There was certainly plenty of potential to have this go into some grayer areas morally the way many a pre-Code film did, but nary an eyebrow gets raised throughout. It’s sanitary in that way, and that’s a little disappointing. One has to think that at least some of the reason for that is the direction of Hobart Henley, who left the industry a few years after this film. The plot is an airy nothing and none of the characters (including Pierre) are really more than attractive cardboard cutouts, but there is a story here. In the hands of a masterful director like Lubitsch, this could have really been something.

Why to watch The Big Pond: No matter the film, Maurice Chevalier is charming to a fault.
Why not to watch: It’s dippy and has the depth of a dinner plate.