Math Majors Hate Him! Click to Find Out Why!

Films: Good Will Hunting
Format: DVD from NetFlix on laptop. 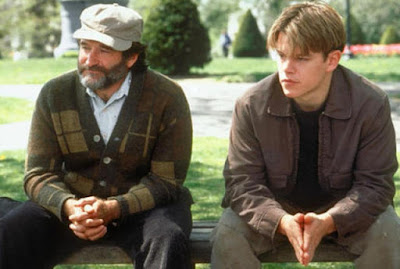 So I finally caught up with Good Will Hunting. It’s only taken my 20 years to get there. The first thing to say about it is how strange it is to see Matt Damon and Ben Affleck this young. Good Will Hunting is one of those movies that fully entered public consciousness, the sort of movie that can be referenced by just about anyone old enough to remember its release whether they have seen it or not. I knew the basic story before I watched it, needing only the details.

Because of that, I wonder about the necessity of the sort of serious plot rundown I normally offer. The basics are pretty simple. Will Hunting (Matt Damon) is an orphan and former abused foster kid who works as a janitor at MIT. As it happens, he’s also a genius of the sort that seems to exist about once a generation or so. Math and some scientific topics seem to come to him intuitively. When a professor (Stellan Skarsgard) posts a difficult proof on a hallway chalkboard, it is Will who solves it despite not being a student and never getting past high school.

The problem is that Will is pretty much the definition of “troubled.” Shortly after he produces this proof and is caught solving a second one, he is arrested for assault for putting the beatdown on someone who picked on him years before. The aforementioned Professor Lambeau gets the court to agree to Will’s release because of his potential. The conditions of his release are that he work with Lambeau on math and that he see a therapist every week. They go through several therapists until they reach Sean Maguire (Robin Williams), who teaches at a nearby community college and is an old, estranged friend of Dr. Lambeau.

There are a few things to throw into the mix. The first is that much of Will’s problems come from his three friends, Chuckie (Ben Affleck), Morgan (Casey Affleck), and Billy (Cole Hauser). The problems really don’t come specifically from them, but come instead from Will’s loyalty to them. Will, we learn, has serious abandonment issues, and his friends are the only ones who haven’t abandoned him. We also need to bring in Skylar (Minnie Driver), a Harvard pre-med student with whom Will starts a relationship.

In this case, it’s probably fortunate that we don’t spend a great deal of time on the math. Instead, the focus of the film is on the psychology of Will and his relationship with Sean Maguire. His relationships with his friends, with Skylar, and with Professor Lambeau are important in understanding what we learn about Will, but it’s Will eventually opening up and revealing himself to Sean (and Sean doing the same thing) that reveals what is really going on inside Will’s head.

We’ve got a lot of Oscars nominations to get through here, so let’s get started. I understand fully how this was nominated for Best Picture. It’s a smart movie, and the sort of story that seems tailor-made for an Oscar ceremony if the film turns out to be well-made. This one is, which means that it’s exactly the sort of film that gets nominations. It’s a feel good, and it’s about someone who is a) extremely smart/talented, b) had a terribly upbringing, and c) is about how this person manages to overcome that terrible upbringing to be extremely smart/talented.

I’m more puzzled by the nomination for Gus Van Sant in the sense that this is not really a director’s movie on the surface. Dig a little deeper, and I get it a bit more. While the camera is nicely used and the story moves well, some of that can be attributed to the screenplay. But Affleck and Damon both were essentially unknown actors at this point in their career, and Van Sant got solid work from them here. It’s more noticeable in the performance of Robin Williams. Williams needed a strong director to turn in a good performance. With good material and someone keeping him on the straight path, Williams could be magnetic and wonderful to watch. With bad material, or without a firm hand, Williams could be embarrassing. Here, he’s magnetic and wonderful, the sort of performance that does (and did in this case) win Oscars.

So let’s move on to Matt Damon, who was nominated as well. Damon is fine. It’ a good performance, but I think he was nominated for the “breakthrough” scene near the end. This isn’t a knock on Damon, who I often like in a lot of his movies, even if he always seems to need to be rescued from somewhere or something. It’s one of those cases where I think the role may have been nominated more than the performance, although I can’t say I hate the nomination.

I should also mention that Minnie Driver was nominated in a supporting role. I don’t have a solid opinion on Minnie Driver one way or the other. Her performance is a good one, and has a good amount of emotional beats, but once again, I think the role was nominated more than she was.

Ultimately, Good Will Hunting is a fine movie, but hardly the revelation that everyone seemed to think it was in 1997. It’s watchable, entertaining, and manages to be heartfelt without being too sappy. I’m happy to have watched it, and I’d see it again, even if it’s strange to see Matt Damon and the Afflecks looking like they just got out of high school.

Why to watch Good Will Hunting: Robin Williams was always good with good material.
Why not to watch: How many films about Southie do we need?