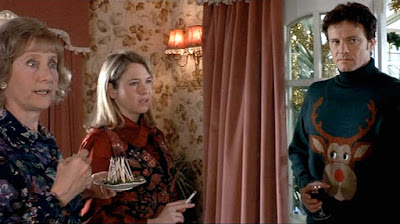 I’ve never really cottoned to Renee Zellweger. This has been a problem for this blog because I’ve avoided a lot of the movies that feature her specifically because I’m not a fan. I’m not precisely sure what it is. Bridget Jones’s Diary even comes from before the time she looked continuously like she had been sucking on lemons. There’s just something about her that strikes me as off. I can’t place it, which makes a movie that stars her problematic for me.

Bridget Jones’s Diary is the story of Bridget Jones (Renee Zellweger), of course, but it’s also a significant throwback to Pride and Prejudice. It is, in fact, very much a reworking of that story put in a modern setting. Bridget works at a publishing house but feels that her personal life is in a shambles. At her mother’s (Gemma Jones) yearly New Year’s Eve party, she is reintroduced to Mark Darcy (Colin Firth), who she evidently knew as a child. Her mother, constantly trying to set her up with someone, has zeroed in on Mark. Things go poorly, though, when Bridget admits that she drinks and smokes too much and later overhears Mark telling his own mother that he has no interest in a woman who drinks too much, smokes too much and dresses like her mother (leaving off the fact that he is in a ridiculous reindeer-emblazoned sweater).

Based on this terrible experience, Bridget decides to start a diary, hence the name of the film. Looking to make a change, she sets her sights on Daniel Cleaver (Hugh Grant), a notorious womanizer who works in her office. As it happens, Daniel and Mark know each other and dislike each other intently. Bridget continues to run into Mark and continues to court his disapproval. When her relationship with Daniel turns sour, she breaks things off with him and leaves the publishing business for a new career in television, where, surprise surprise, she is assisted by Mark.

Of course, the entire point of all of this is that we kind of know that Bridget is going to end up with Mark Darcy. If you are even remotely familiar with Pride and Prejudice, his name gives it away, after all. Of course there are going to be problems along the way, and in the case of Bridget Jones’s Diary, those problems are going to mainly be concerned with making Bridget embarrassed.

I don’t like embarrassment-based comedy. It makes me uncomfortable and squirm in my seat when it happens. It’s the same reason I had problems with There’s Something About Mary and Meet the Parents> I don’t enjoy watching other people be shamed in the real world or in film.

The truth is that Bridget Jones’s Diary isn’t a terrible movie, but it contains a number of elements that I don’t like much. The truth is that I’d much rather watch Pride and Prejudice, or, better, Sense and Sensibility. I don’t really groove on Jane Austen that much, but I do wonder why some things need to be updated. This is a story that didn’t need it.

I should probably discuss Renee Zellweger here, because she’s the reason this one came across my desk. It’s a fine performance, but I do wonder why an American got the part of a British woman. Actually, I wonder this frequently about the reverse in many cases, too.

I’m rambling, and I apologize for that. I don’t have a lot to say about this movie because I don’t have any really strong feelings about it one way or the other. I didn’t hate it and I didn’t like it that much, and aside from a couple of good lines and good moments, I probably won’t remember a great deal about it a couple of months from now.

Why to watch Bridget Jones’s Diary: You can’t get enough Jane Austen.
Why not to watch: It relies a great deal on embarrassing our main character.