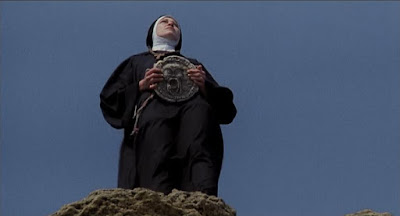 A lot of horror movies get a good amount of mileage through the use of religious imagery. I’d love to say that started with The Exorcist, but it certainly comes from earlier than that. I think there are plenty of possible reasons for this. Horror movies frequently deal with overt evil, and for many religion is the opposite. Even if it isn’t the idea of a god is frequently taken to be the opposite of evil. But I mean the idea of using religion and religious trappings in a much more significant way. In American culture, the church in question tends to be the Catholic church. Half the time, the church is the savior while the other half of the time, the church is corrupted or complicit in the evil. With Dark Waters (also known as Temnye Vody), it’s a little bit of both, but really, it’s the second option.

Elizabeth (Louise Salter) arrives on an isolated island that contains a secluded convet and not much else. Her backstory is that 20 years earlier, she was born on this island and in this convent and that her mother died in childbirth. Her father took her away soon after, and has given a yearly bequest to the nuns to keep the place running. When the film starts, Elizabeth’s father has just died and has charged her to maintain that yearly stipend. She has arrived to check the place out and see if it’s worth funding.

But, even before we really get to the convent, we already kind of know where we’re going, right? This is a horror movie…that takes place in a convent. Either the nuns are going to be evil and perverted and have converted to Satanism or something similar or they are going to exist specifically to keep some kind of great evil at bay. Or, in the case of Dark Waters, we’re going to get both. See Dark Waters is going to subscribe to the idea of “both and” rather than “either or.”

Things are weird. Nuns disappear. Many of them appear insane or close to it. Elizabeth is sure that she sees bodies and the nuns carrying flaming crosses. This is new to her, but not to us—the film opens with a nun committing murder, so it’s not that shocking for us. In fact, the only seemingly normal person at the convent is Sarah (Venera Simmons), who is charged with watching after Elizabeth while she is there. When Elizabeth offers her fears up to her new friend, Sarah helps her investigate.

There are a few big revelations, of course. Elizabeth frequently has flashbacks to a pair of twins on the island, one of them covered in blood. Over time and with a few clues that she discovers, she comes to realize what has really happened to her mother and what the convent actually represents. I’m not going to say more than that—there are a lot of possibilities (including the actual story) wrapped up in that, and Dark Waters is just good enough to be worth seeing.

It’s not great, though. It’s sort of a violent episode of Scooby-Doo more than anything else. Of course we know there’s going to be something. There are pictures of some sort of eldritch, Lovecraftian demon thing all over the place. There are stone sigils and even people crafting the demon face into needlework. If it is your guess that a creature that looks like that is going to be what we might see at the end, well, I’m not going to disabuse you of that notion.

The truth of Dark Waters, though, is best left under a spoiler tag. I’m not going to spell out the ending, but I am going to reference two movies. If you know those two movies, it won’t be hard to figure out how everything turns out.

Dark Waters is essentially a combination of two movies. A great deal of it is, when it’s not being Scooby-Doo, The Wicker Man. For reference (and my own sanity), I’m talking about the original version of this movie. At the end, it turns into the 1977 movie The Sentinel almost to a frame-by-frame moment. I have to admit that while I didn’t see that coming specifically, I can’t say that the shock ending really worked on me at all.

Dark Waters isn’t bad, but it’s also not that great. It’s one of those rare movies where the story behind its production is a lot more interesting than what is on the screen. It is one of the first, if not the first, non-Soviet films to be made in the Ukraine after the collapse of the Soviet Union, and the production was plagued by coup attempts and other nuttiness. While this movie isn’t bad, I’d honestly much rather watch that than what I watched here. Still, you could do a lot worse.

Why to watch Dark Waters: It goes more for creep than gore.
Why not to watch: The surprise ending? Not so surprising.

Posted by SJHoneywell at 7:58 PM