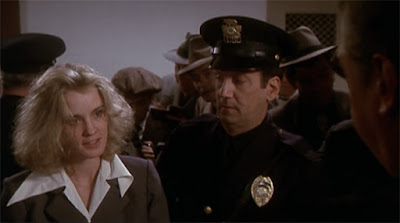 I don’t know why I haven’t really warmed to Jessica Lange as an actress. You don’t get six Oscar nominations with two wins without being good at what you do, though. It’s strange, because I tend to like her when I see her in films. I just don’t really think of her that often. I’ve said before that I thought Sweet Dreams was her best work on camera, but that was before I saw Frances.

Frances is a biopic of the life of actress Frances Farmer (Lange), who was the definition of a troubled star. The film opens with Farmer as a junior in high school winning a contest for an essay about believing that God is dead. Since this is in the ‘30s, this naturally causes a great deal of controversy, putting her in the crosshairs of some of the locals in her native Seattle. She finds herself back in the news a few years later by winning and accepting a trip to Moscow to visit the Moscow Art Theater. This is before the Cold War (before World War II, in fact), but still raises some eyebrows. After all, people already have her pegged as an atheist, and she’s apparently doubled-down by visiting the godless communists.

Eventually Frances returns and starts a career in Hollywood. She decides to play by her own rules, though, not wanting to be a part of the system or deal with publicity stunts. She gets married against the advice of her studio. Returning to Seattle for the premiere of a new film she runs off with Harry York (Sam Shepard), an old friend and suspected communist himself. Shortly after this, she leaves her husband and signs up with Group Theater headed by Clifford Odets (Jeffrey DeMunn), with whom she starts a relationship. When the play moves to London, Odets abandons her for an actress who helps fund the production, which sends her back to Hollywood.

Bad movies and bad roles follow, with Frances quickly becoming hooked on booze and amphetamines. Eventually, the wheels come off completely, and she is institutionalized. Eventually she breaks out (with the help of Harry York) and returns to live with her parents. It is here that the depths of the psychosis of her mother (Kim Stanley) become truly known. Frances has decided to chuck it all and go live quietly in the country, but her mother won’t let her, instead institutionalizing her again in the sort of facility that seems more torture chamber than hospital.

It’s here where Frances goes completely off the rails. I have no idea if Frances Farmer was actually subjected to electroshock therapy, but the film also depicts her as being lobotomized while in the institution, something that evidently never happened. Oh, it certainly works for increasing the pathos of the final half hour or so of the film, but it seems like a pretty significant event to manufacture for a biography.

That’s the issue I have with the film. Frances Farmer’s life was clearly interesting and bizarre enough to warrant a straight telling of what really happened to her without creating additional things to ramp up our sympathies. It’s not necessary to make things more than what they are for a film like this one, but evidently, it was too good of an opportunity to resist for our screenwriters. It was a bad choice. The truth is always the way to go, even if that means some condensing for the film version. I expect that we might get several characters blended into one, or some small changes in the timeline. But lobotomizing the poor woman is the equivalent of making a film about Patton and giving him a club foot and making him transgendered. Why do that?

None of this is the fault of Jessica Lange, who is truly magnificent in a demanding role. It isn’t her fault that the film dives headlong into something akin to melodrama in the third act. Lange plays it straight and she works even if all of the various plot points don’t. Lange is challenged to make Frances Farmer sympathetic by being wronged by just about everyone in her life and fighting for what she has left. She does this well, and manages to make this come across as real, veering away from that deep dive into melodrama.

I should also mention Kim Stanley, who was nominated in a supporting role. Stanley isn’t in the film much in the first 90 minutes or so, but when she shows back up after Frances leaves the hospital the first time, she brings the crazy in spades. Stanley was a supremely talented actress, netting two Oscar nominations in a total of five film roles (six, if you count her voiceover narration for To Kill a Mockingbird). I wish she had done less television and more film because I haven’t seen a performance from her that I haven’t liked or loved (I’m missing one), and in Frances she shows all of her potential.

If you can live with the inaccuracies, this is worth tracking down for Jessica Lange and Kim Stanley, but it’s probably not a film you’ll want to watch a second time. I’d be even more impressed if it had stuck with reality instead of attempting to make a bad situation so much worse.

Why to watch Frances: Jessica Lange.
Why not to watch: Despite claiming historical accuracy, it takes massive liberties with Frances Farmer’s life.