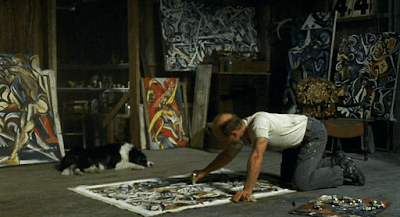 Ed Harris is someone I trust as an actor. This doesn’t mean that I immediately trust his characters, since Harris has played a few nasty, evil people. But I trust him in the roles he’s been given. I feel confident that Ed Harris will do good work and that he is capable of being brilliant, as he has been many times in his career. For me, Ed Harris will always be Gene Kranz in Apollo 13, and that might be a part of the reason I trust the man to handle any role he’s given. With Pollock, Harris joins a select company as someone who directed himself to an Oscar nomination, which makes me wonder why he hasn’t directed more films.

Pollock is the biography of artist Jackson Pollock, who caused a massive revolution in the art world and died far too young in his mid-40s. Harris had evidently been fascinated by the man’s life for years and bears a passing physical similarity to him. The film starts at a gallery showing in 1950, flashes back to his early career and his early relationship with fellow artist Lee Krasner (Marcia Gay Harden, who won for a supporting role) and the beginnings of the movement he started in the art world thanks to the patronage of Peggy Guggenheim (Amy Madigan) and influential art critic Clement Greenberg (Jeffrey Tambor).

Pollock’s demons are clearly on display even in these early years. It would be difficult to make a hagiographic film based on the reality of Pollock’s life, since he was an inveterate womanizer and descended rapidly into alcoholism, a fact that ultimately caused his untimely death. The movie doesn’t shy away from this reality, showing Jackson Pollock to be not merely a drunk, but a mean and sometimes violent drunk. His mental demons (the film calls him neurotic and he was actually bipolar) are on full display when he learns that his brother Sande (Robert Knott) is moving away, a fact that sends him on an epic bender.

His relationship with Lee Krasner serves as something of a stabilizing influence on him despite his drinking too much and penchant for causing scenes among potential wealthy buyers. His relationship specifically with Peggy Guggenheim is cloudy. She is constantly intrigued by Pollock’s artwork and frequently repulsed by his personal behavior. However, it is Guggenheim who brings Pollock to the masses, and manages to earn a sweet deal for herself. She acts as Pollock’s patron, giving him a stipend that gives her possession of any of his paintings that don’t sell.

A great deal of Pollock concerns the reactions to Pollock’s work in the art world. This is the one place where I think the film falls significantly short of where it could. The work of Jackson Pollock is often seen as the poster child for how modern art became nonsensical and pointless. This is especially true of the most influential period of his career where he painted by stretching a canvas on the floor and dripping or pouring paint on it. He painted without touching the canvas with a brush at all, using the brushes, as he says at one point in an interview, like a stick.

I’m enough of a Philistine that I don’t fully understand the work of Jackson Pollock. People who claim to know that his art is groundbreaking and important obviously see something in it, and it’s something that I can’t see. I want to know exactly why his work is so important and what the meaning behind what looks like random dribbles of paint actually is. The movie doesn’t offer any insight, and that seems like it should be something that it discusses. It’s a chance to show an audience uninformed of various art movements why this work is so critical and impacting. I mean, I’m not an art historian or knowledgeable about art in general. There are modern art pieces that I can relate to and find meaning in, but Pollock’s work absolutely eludes me.

The film pivots on the two main performances, those of Ed Harris and Marcia Gay Harden. Both are excellent, and Harden is especially good here because she needs to express a personality that is difficult in some ways to understand. Lee Krasner clearly loved Pollock and his work and understood what he was trying to communicate. He frustrations were not with his evidently near-constant affairs and repeated infidelity but with his moods and the frequent periods where he simply stopped working and moving forward on the radical movement he was creating. This culminates in a massive argument where she screams at/begs him to simply get back to work and paint something.

Naturally, Harris’s performance is central to the film working at all, and Harris is good in the role. Then again, I expect Harris to always be at least watchable. He manages to make Pollock a compelling character despite Pollock’s flaws and unlikeability. It’s not always easy to be interesting and to fully hold a scene when playing someone so plagued with demons and so unpleasant to be around, and Harris gets a great deal of credit for making that work.

I don’t know that I can honestly say that I enjoyed Pollock, but I was never bored when watching it. I am certain that if I were a bigger fan of Jackson Pollock, I’d like it even more than I did. As it stands, this is an interesting biography of someone whose work I frankly don’t understand.

Why to watch Pollock: Ed Harris is always worth seeing.
Why not to watch: The importance of Pollock's work is never explained.