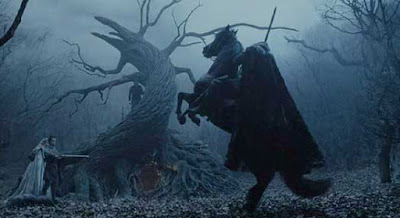 I’m not what anyone would mistake for a Tim Burton apologist. I like plenty of his movies, sure, but there are a bunch that leave me pretty cold as well. It seems sometimes that he is too focused on the look of the film and not enough thinking about the content. There are notable exceptions, of course. One of these is Sleepy Hollow, which suffers a little from being a Burton gothic/steampunk fantasy but manages to transcend most of its problems with good storytelling and a lot of visual pizazz.

The Legend of Sleepy Hollow is a classic American fable. In the story, a schoolmaster named Ichabod Crane competes with local tough guy Brom Van Brunt for the hand of the richest farmer in the area. Eventually, Crane is run out of town by the appearance of an evidently headless man on a horse, a legendary figure in the apparently ghost-addled area. After this encounter, Crane is never seen by the townsfolk again, leading to a legend that he himself was spirited away by supernatural means, although the most likely case is that his headless attacker was a disguised Brom.

Sleepy Hollow takes the bones of this story, changes a few critical details, and comes up with a pretty good spook story run through the lens of Tim Burton. In this version, Ichabod Crane (Johnny Depp) is a police constable from New York. Crane is dedicated to the ideas of science and is dead set against the more primitive and medieval methods of police work and trials on offer at the tail end of the 18th century. A continual thorn in the side of the justice system, Crane is sent to the small town of Sleepy Hollow by a local magistrate (Christopher Lee), who tells him that the small town has recently had a rash of murders. In each case, the victim was found minus his or her melon.

So off Crane goes to the town, where he discovers a community living in fear of the headless horseman. According to their story, the horseman is the spirit of a Hessian soldier (Christopher Walken) who fought in the American Revolution not for gold or glory but for the sheer joy of creating carnage. Eventually hunted down, the Hessian had his head removed and was buried in a now-haunted area of the woods. The townspeople think that he has returned from the grave and is chopping off heads in retribution. Crane, against the very idea of superstition, thinks this is ridiculous, but he is nonetheless counselled to be wary of the supernatural by all of the town leaders. These include wealthy farmer Baltus van Tassel (Michael Gambon), the Reverend Steenwyck (Jeffrey Jones), Magistrate Phillipse (Richard Griffiths), Notary Hardenbrook (Michael Gough), and Doctor Lancaster (Ian McDiarmid).

We’ve got a few other notables thrown into the mix, of course. One is Brom (Casper Van Dien), who, as in the original story, will vie against Ichabod for the hand of Van Tassel’s daughter Katrina (Christina Ricci). Also playing important roles are Young Masbeth (Marc Pickering) and Van Tassel’s wife, Lady Van Tassel (Miranda Richardson). Amongst all of these competing personalities, Ichabod needs to determine not just who is committing the murders, but who stands to gain by them and the motive for them. Since this is at least marginally a horror movie, this means that the legend of the Hessian is going to prove to be true, and we’ll be getting a lot more head removal scenes before the final credits roll.

There’s a lot that works for me in Sleepy Hollow. In fact, almost everything does. The plot is really carefully crafted and it unwinds about as nicely as it can. While the various plots and subplots are extensive, the film never becomes confusing. It’s complex without becoming complicated, and it’s never a problem to follow along with the action or the various characters. It’s also got a classic look to it—it might be the most visually Tim Burton-y film on offer. Burton’s style works well with a period piece set in this time. Here, his gothic touches don’t seem out of place or strange—they instead work with the characters and enhance the overall experience rather than calling attention to themselves.

I also love the cast stem to stern. This is a great collection of character players throughout, with Depp and Ricci holding the main roles. I can’t call myself a Casper Van Dien fan, but Brom isn’t in the film much, and Van Dien does exactly what he needs to to make the role work. It’s a very deep cast, though, with a few bit roles for no less than Martin Landau and, technically, Christopher Walken, who is really only in a couple of scenes.

The only thing that really fails for me is the attempt to make Ichabod Crane a man of science. There are a couple of scenes where he pulls out some bizarre scientific instruments that wouldn’t look out of place at a steampunk convention, but these are very quickly abandoned as the film continues. The idea of these was great—bringing in some bizarre, difficult-to-use scientific contraptions makes for even more visual fun, but it’s barely exploited in the narrative. There’s more that could be done with the weird science, and while I don’t miss it in the moment, I do wish there had been more of it when the film ends.

Sleepy Hollow is probably not Tim Burton’s best film, but I think it might be his most fun. It’s a film I don’t tire of watching.

Why to watch Sleepy Hollow: A great retelling of a classic American fable.
Why not to watch: Some of its ideas aren’t explored deeply enough.