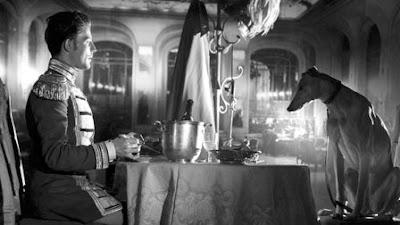 I don’t particularly like writing two less-than-enthusiastic reviews in a row. In fact, I don’t love writing less-than-enthusiastic reviews. Oh, I admit they are fun and cathartic, at least for me. Honestly, though, I’d rather write a glowing, if milquetoast review and really enjoy the movie. My bitterness and agony might be entertaining for other people, but I’d genuinely rather enjoy my time with a film. It’s for this reason that I try to go into every film with as much of an open mind as I can. I’ve been surprised before and loved films that I was leery to watch. With La Ronde, a Max Ophuls, well, sex comedy, I had high hopes. At the very least, I knew it would be pretty.

Here is where I typically talk about the plot of the film. The problem with La Ronde is that it doesn’t really have much of a plot to speak of. It’s not a character study, either. Instead,m it is a chain of events that link up different people in different sexual partnerships, and by the time we get to the end of the movie, we’ve come back to one of the people we started with. That’s literally it. Slightly more than 90 minutes of watching people imply that they’ve just had a great deal of sex before one person in the couple moves on and has sex with someone else. This is literally the film. I am not embellishing this or exaggerating.

And therein lies the problem. The biggest issue La Ronde has is that it has aged very poorly. This was new and interesting in 1950 (it’s nomination came in 1951, for the record). In fact, it was likely shocking and titillating. It’s not now. Implied sex, particularly sex implied with fourth wall break comments or actions, no longer serve as a substitute for sex in a jaded world, or at least a world coming more to grips with the idea that sex is a thing that people do without having to pretend they don’t.

So, we have an interlocutor (Anton Walbrook) who is going to take the role as a pseudo-narrator in his little tale of love. As we move from couple to couple, or rather as each couple splits and one half joins someone else, he’s going to show up. Sometimes he’ll talk to us, sometimes he’ll sing, and sometimes he’ll interact with the people on the screen. Walbrook is honestly the only thing I even kind of liked in the film.

Our couples start with a prostitute who offers a freebie to a soldier. The soldier than makes time with a chambermaid, who spends an afternoon with the adult son of her employer. This son finds a lover in a local married woman, who still manages to work up a night of passion for her husband. That husband picks up a young girl and woos her, going so far as to rent her an apartment, where she takes in visits from a young playwright. That playwright has a dalliance with one of his actresses, who is visited by an amorous count. The count, rather than seeing his actress again, picks up our prostitute from the start of the film, completing the human centipede of sex. Give ‘em one dose of the clap and you could evidently knock out half of Vienna.

It’s a shame, too, because Ophuls could use his camera very well and composed some beautiful shots. The film is beautifully staged as well. It starts with our interlocutor walking on a stage, asking us if we’re prepared to see something staged in that way. He walks by a camera, asking us if it should be a movie instead. Then he walks on and we’re suddenly outside (we aren’t, since Ophuls did the whole thing on a soundstage, but it looks that way). It’s a great effect, and while it’s quickly forgotten, there’s a call back to the original stage at the end of the film. I love stuff like that, and I wish it were in service of a better movie.

It’s doubly a shame because I love some of the people in this. Our prostitute is played by Simone Signoret and the chambermaid is Simone Simon, who manages to look younger here than she did in Cat People despite being 40 in this film. I love both of them on the screen whenever I can see them, and while they are both still appealing actresses here, it’s in service of not much. I was so bored that I literally could not remember if it was black-and-white or color 20 minutes after I watched it.

That really is the problem with La Ronde. It’s not a bad movie. It’s beautifully filmed and well acted. It’s nicely cast. It’s also shockingly boring. I could barely get through it and I didn’t care a whit or a whiz about a single character, aside from the man who acts as our narrator. He had a couple of good jokes, like his carousel that represents people making the beast with two backs breaking down when one of the men suffers from impotence. Still, while he’s fun, this is only worth your time if you feel the need to see everything of Max Ophuls or one of the stars. It didn't help that the copy I watched had a problem synching the video and audio.

Why to watch La Ronde: It doesn’t overstay its welcome.
Why not to watch: There’s no reason to care about a single character.