Celine and Jesse Go Through Life 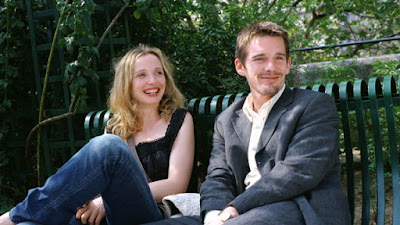 Years ago, former blogger Nick Jobe ran a review contest. I made it to the third round, which means I made it to the final eight, and I lost to the eventual winner. I lost with a review of the movie Before Sunrise. That contest took place in a world where the sequel, Before Sunset had been released years before and a year or so before the third film in the trilogy, Before Midnight was released. Today, I decided to finally complete the trilogy, deciding that maybe I didn’t need to wait nine years for each installment.

It’s important to understand Before Sunrise going into the second and third movies in the trilogy. I won’t do a full review here, because it’s not necessary, but a quick run-through of the plot will be helpful. Jesse (Ethan Hawke) is a young American on a train in Vienna. He meets Celine (Julie Delpy), who is returning to Paris. Jesse has to spend the day in Vienna before his flight leaves the next day, and he doesn’t have enough money for a hotel room. His plan is to simply walk around and see the city before he leaves. He convinces Celine to leave the train with him and spend the day in Vienna. Over the course of the day, before sunrise, to coin a phrase, the two kindle something much like a romance. But lives call them; Jesse must return home, and so must Celine. They agree to meet again in Vienna in six months.

Before Sunset picks up nine years later. Jesse is now married and has a child. He’s also written and published a new bestseller based on the night he spent in Vienna with Celine, although the names have been changed. He is in Paris doing a book signing on the last leg of a promotional tour when Celine walks into the bookstore, having discovered that he was going to be there. And history repeats itself. Jesse is scheduled to fly out that night, leaving the two of them just a few short hours to reacquaint themselves with each other and catch up on nine years of life.

Before Midnight moves another nine years into the future. Now, Jesse and Celine are together as a couple, and they have twin girls. As this movie starts, they are ending a summer in Greece and Jesse’s son Hank (Seamus Davey-Fitzpatrick) is preparing to return home. Celine, Jesse, and the girls are set to return to Paris the next day. Two of their friends have arranged for the two of them to spend the night together in a nearby hotel without their daughters. A final night alone before they return home. As sometimes happens in such situations, the romance sours quickly, and Jesse and Celine find themselves embroiled in an argument that threatens to tear them apart, well, before midnight.

The Before trilogy has a number of strengths that grow in Before Sunset and come to fruition in Before Midnight. The first, and arguably the most important of these qualities is the dialogue itself. All three of the movies have dialogue that mirrors actual speech. Conversations, or really the one continuous conversation, goes in all directions at once. Topics change and mutate and turn into other topics naturally and fluidly. Emotions turn on a dime. The characters go from laughing at a private joke to suddenly taking offense at something and being passionately entangled in a fight just moments later. It feels like a real conversation in every case. 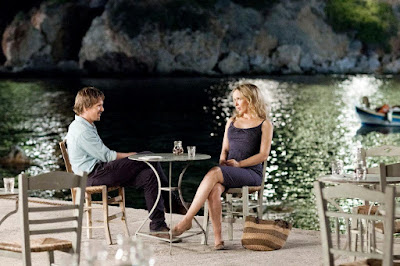 Another great strength is the sense of the characters. Both Jesse and Celine are fully realized characters. Neither one is idealized in any way. They each have their own strengths and problems and personal quirks that are consistent from film to film and moment to moment. These are real people, as real as their dialogue. This is even true for Jesse’s son Hank, who is on screen for just a few minutes but comes across as a real kid with a real relationship with his father.

Third, and perhaps as important as the first point, is that these movies feature relationships that feel real. The fight that grows naturally out of the conversation in Before Midnight references events that happened years before in the relationship, moving from event to event much like a real fight between two people who have a long history together. There is a conversational shorthand between Celine and Jesse that feels real and natural and accurate to the way that real relationships happen. It’s not a staged fight. It’s organic, and where it goes comes naturally from the topics that are being discussed and just as naturally from the history we presume these people have with each other.

Finally, there is a travelogue element to all of these films. In the first, we get Vienna; the second, Paris; and in the third we have the Southern Peloponnese. Everything happens in an environment that has a particular romance to it and a beauty that adds to the conversations. In fact, when Jesse and Celine begin fighting in the third film, it means something (at least to me) that it happens in a very standard hotel room, the place that is perhaps the most unnatural in some ways and the most detached from the surrounding exotic locale.

All three of these films take place over the course of a single day, and this works to their strength as well. It’s all immediate. The buildup of the drama happens immediately, as it does in real life.

I can see some people having a problem particularly with the first two films. Before Sunrise shows the beginning of a relationship; Before Sunset shows the continuation of that. In both cases, there’s not much of a plot. It’s more a character study of this strange relationship. Before Midnight does have more of a plot, but even here it doesn’t really happen until the last half hour.

Truthfully, though, the entire trilogy is worth seeing. Few films capture the reality of a relationship as well as these three snapshots. My only worry is that in 2022, Linklater, Hawke, and Delpy will decide to continue this story. They shouldn’t. It’s just what it needs to be as it is right now.

Why to watch Before Sunset: It picks up beautifully from the first movie.
Why not to watch: The ending might be too pat.

Why to watch Before Midnight: It feels real.
Why not to watch: If Linklater does another one of these, he’ll spoil the trilogy.