Film: Constantine
Format: Streaming video from NetFlix on The Nook. 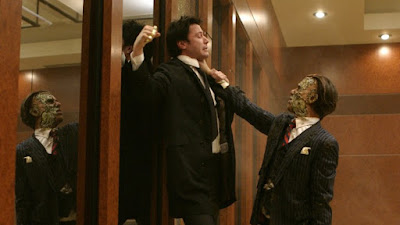 Constantine is the sort of movie that I really want to like. It’s more or less The Matrix with overt theology rather than implied theology. Constantine has a clear position in terms of the spiritual world. Like many a film that deals with demons not just as monsters but as actual characters, we’re dealing with a more or less Catholic world view. The world of Constantine purports that God and Satan have essentially a pact that Earth is off limits. They can’t use direct influence on the world but can influence the world through agents that exist in the world, people who are angelic or demonic half-breeds.

Our hero is John Constantine (Keanu Reeves), a man with the ability to see these half-breeds in their true form. Constantine has always had this “gift,” and when he was a young man, these visions forced him to commit suicide. Technically, he didn’t survive the suicide attempt and was dead for two minutes, which he spent in Hell. As a suicide, Constantine is forever damned despite anything he might do in this life. Either in spite of this or because of it, he spends his days finding demonic agents and sending them back to Hell, knowing that it might be the right thing to do and similarly knowing that because of his motivations, it will do nothing to save his soul.

This is all critical backstory for the film. The film itself concerns the Spear of Longinus, otherwise known as the Spear of Destiny. As the movie starts, the Spear is dug up by a scavenger in Mexico. As it happens, the Spear, stained with the blood of Jesus Christ, is needed in a ritual to bring the son of Satan to the mortal plane. The Spear does show up as an important artifact eventually, but a great deal of the film instead concerns the evident suicide death of a woman named Isabel Dodson (Rachel Weisz). Constantine is eventually contacted by Isabel’s twin sister Angela (also played by Rachel Weisz) to discover what really happened to her.

Along the way, we’re going to encounter a number of demonic characters, primarily a man named Balthazar (Gavin Rossdale). We’ll also spend some time with the half-breed angel Gabriel (Tilda Swinton), who doesn’t seem to care much about what Constantine is going through. What is he going through? Well, we discover that his chain smoking habits have done their worst and he is currently dying of an aggressive form of lung cancer. We’ll also encounter a few people that either help or hinder Constantine’s investigation in one way or another. He has a sort of assistant/apprentice named Chas (Shia LeBeouf), deals with an alcoholic priest named Hennessey (Pruitt Taylor Vince), gets mystical and religious artifacts from an insect aficionado named Beeman (Max Baker), and frequently quarrels with a former witch doctor named Midnite (Djimon Hounsou) who works specifically to maintain the balance between good and evil.

What we’re going to get is both spiritual and physical warfare, a couple of visits to Hell, some pretty good special effects, and eventually an appearance by Satan himself (Peter Stormare). What we’re sadly not going to get is much in the way of exploiting all of the really good ideas that Constantine attempts to include.

Really, that’s the major problem I have with Constantine. Even though the film is a good two hours long, it’s not nearly long enough to deal with all of the ideas that it brings up. It’s sad, because this would have been so much better as a show with multiple episodes. If only it could have waited for the current rise in more interesting television shows, it would have had a great deal more space to deal with all of these intriguing ideas. Constantine is based on the Hellblazer comic series published by DC’s Vertigo imprint, which means that there’s a great deal going on and a lot of potential back story and world building. This same story expanded over a 10-episode miniseries on NetFlix or HBO would have been fantastic, because everything would be explained and make sense.

It’s a shame. I really want to like this a lot more than I do. In fact, I wanted to love Constantine because this is the sort of stuff that really makes me happy. It’s got a great deal in common with a film like Hellboy, which is one I hold near and dear to my heart. While I don’t take actual theology seriously at all, I do often find movies that delve into theological areas really interesting. The ideas are interesting, and when they are used well and fully exploited, I rarely find myself unsatisfied as a viewer.

Constantine doesn’t give us enough. It offers a peek into this world and doesn’t live up to its promise. That’s depressing because this could have been fantastic, and could have been the beginning of a series of films that dealt with really interesting questions and moral problems. Instead, we get something with a lot of promise and a lot of flaws. Bummer.

Why to watch Constantine: Great ideas, plus Peter Stormare as Satan is fantastic casting.
Why not to watch: A lot of those ideas aren’t really dealt with much.