Films: The Pit and the Pendulum (1961)
Format: Turner Classic Movies on rockin’ flatscreen. 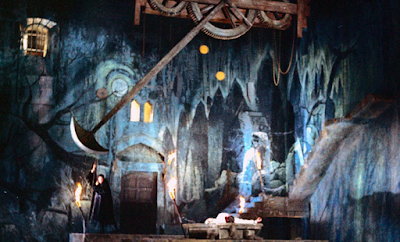 I know Roger Corman made a lot of shitty movies, but I’m really getting to the point where I have to admit that I like a lot of them. He didn’t make a lot of loser films in terms of box office, and when he was on, he was really on. He also managed to work with a lot of great people during his career, including making a lot of movies starring Vincent Price, one of the gold standards of ‘50s and ‘60s gothic horror. The Pit and the Pendulum is a film that plays on a couple of important Corman tropes. First, it’s a period piece, which means capes and poofy costumes. Second, this is one of his Poe films, and his Poe films rank among his best.

Another of Corman’s touchpoints in his Poe films is that there’s a lot of material added here. Many of Poe’s stories were really short and might make a dandy short film. To make something of feature length, a great deal needs to be added. In this case, it’s the entire first hour or so of the movie, which was created in service of getting on character strapped to a rack while a bladed pendulum slowly descends toward him with the intent of chopping him in half. Hey, you want ao good scary moment, you need to work for it.

In this case, we lose the context of the original story of there being a man imprisoned as a part of a revolution and being tortured. Instead, we have Francis Barnard (John Kerr) travelling to Spain to see the last resting place of his sister. One imagines that this journey has taken months since all of this is taking place in the 16th century. Francis’s sister Elizabeth (Barbara Steele) married Nicholas Medina (Vincent Price) and then mysteriously died. Francis shows up and is greeted by Nicholas’s sister Catherine (Luana Anders), who tells him of his sister’s mysterious death.

Elizabeth’s death has been chalked up to essentially a heart attack caused by fright. This means there’s going to be some fun backstory. As it happens, the father of Nicholas and Catherine was a noted torturer for the Spanish Inquisition, which means that the castle this all takes place in has its own torture chamber (because of course it does). Further, we discover from Nicholas’s friend Dr. Charles Leon (Antony Carbone) that when he was a child, Nicholas witnessed his father torturing his brother and wife for infidelity. Naturally, this incident has scarred Nicholas terribly and he carries around some guilt from this. Additional guilt is piled on because he holds this fact responsible for Elizabeth’s death. Worse, we learn that his mother was not merely tortured to death but entombed before she was actually dead. Nicholas is now convinced that he interred his wife too soon as well and is haunted by the possibility that he has done to his wife accidentally what his father did to his intentionally.

This wouldn’t be an adaptation of a Poe story if we didn’t have an unquiet ghost, though. Suddenly there are traces of Elizabeth appearing around the castle. The harpsichord in her room is heard being played despite the room being locked. A piece of her jewelry appears and her room is ransacked. This all hits Francis as being strange and suspicious and hits Nicholas as being portents from beyond the grave. As improbable as it seems, this actually does get us to the point where Francis is tied to a table and Nicholas is slowly lowering a bladed pendulum toward him. It seems like a stretch, but the movie gets us there honestly. Well, mostly honestly.

There’s a lot to like here. Not the least of this is the performance of Vincent Price, which is about as off the chain as you would expect it to be. For a film punched out in a couple of weeks, it looks pretty damn good. It also has a couple of genuine horror moments, including one right at the end that more or less pays for any problems the film might have. Sure, there’s not any real connection here to the original story beyond the eponymous pit and pendulum, but it doesn’t really matter. The story feels like it could have been a Poe story in the main, and that works for me. Corman more or less took the main trappings of a short story and converted them into something that feels like it came from the same mind. I’m giving Corman the credit for this, but it’s worth noting that Richard Mattheson worked on the screenplay, and it shows.

On the downside, everyone is pretty wooden here beyond Price and Barbara Steele. There are some line readings that are a step above community theater and not a full step at that. I can forgive this, though, because everything else is so much fun. This isn’t going to change anyone’s life, but it’s a wonderfully fun way to spend 80 minutes.

Why to watch The Pit and the Pendulum: Vincent Price chewing all the damn scenery and Barbara Steele being evil.
Why not to watch: Everyone else is pretty wooden.

Email ThisBlogThis!Share to TwitterShare to FacebookShare to Pinterest
Labels: horror, Roger Corman, The Pit and the Pendulum