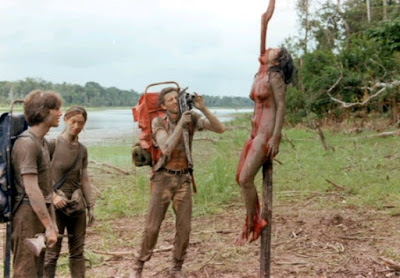 Watching from a list means opening yourself up to a lot of possibilities. In the case of Cannibal Holocaust, I was prepared for nastiness. The legend of the movie is that director Ruggero Deodato was arrested and charged with murder of several of the lead actors who he had demanded stay hidden for a year to build up the legend of what happens on camera. He had to produce the actors themselves to avoid facing life in prison.

Cannibal Holocaust is a legendary horror film because of the brutality of the footage. It’s also more or less the progenitor of the found footage concept, since a good portion of the last chunk of it is exactly interspersed with scenes of characters discussing the footage that they have seen. The footage itself is of those four filmmakers heading into the Amazon rainforest to encounter cannibal tribes and learn about them. Naturally, the four filmmakers, director Alan (Gabriel Yorke), script girl Faye (Francesca Ciardi), and cameramen Jack (Perry Pirkanen) and Mark (Luca Giorgio Barbareschi) have disappeared. Anthropologist Professor Harold Monroe (Robert Kerman) has decided to follow their expedition to discover what has happened to them.

Monroe and his guides enter the jungle and eventually find the tribe of Yacumo natives who eventually present him with the remains of at least some of the film crew. Monroe, by being a willing participant in a cannibalistic ceremony, manages to retrieve the film cans and take them back to New York where we get to see the footage that Alan and his crew shot.

I’m not going to go into great detail here except to bring up some things that are objectionable both within the film itself and objectionable in the larger sense of the world in which this film exists.

We start by finding out that a group of four filmmakers, particularly Alan, have a penchant for creating a great deal of the drama in their documentaries. Alan has a track record of, for instance, arranging executions of prisoners in war so that he has something to film. The same thing is going to happen here as he and his team round up natives, force them into a hut, and then burn them alive with the intent of claiming that it was a rival tribe who killed them. We also see the men rape a native woman they catch out on her own. This is obviously intentional. Coupling these images with the last line of the film (which I will not reveal), and the director’s intent is clear to make the film crew really awful people.

The big objection here is that there are a number of animals that are really killed on screen simply for the sake of the movie. A few monkeys, a giant turtle, and a variety of other animals are hacked apart for the pure titillation of the audience. I could see that happening in a much older film, but Cannibal Holocaust was made in 1980, certainly after at least some efforts to make filmmaking more humane in general. It’s hard to watch because it’s real when the characters take a real machete to a real turtle and kill it on camera.

I didn’t enjoy watching this. I understand the film’s importance, but it’s not an experience that I thought was entertaining or fascinating or even interesting. It’s ugly and a great deal of it is purely designed to be as ugly and disgusting as possible to get the audience riled up or sickened. I get the desire to do that, but it’s simple to gross people out, and it’s simple to do so at the expense of the native people in the film. Cannibal Holocaust becomes an exercise in something like cultural superiority, at least in terms of the found footage. Ruggero Deodato’s opinion may well be different, and that may well be the point of the entire enterprise.

It’s pretty awful, and not in a good way. I’ve seen some shit over the last seven years, and while Cannibal Holocaust has a deserved reputation for its nastiness, it’s not close to the nastiest thing I’ve seen since I started this blog.

And sadly, I don’t have a great deal more to say about it. Stupid, imperialistic white people walk into the jungle to bring back footage of those wacky cannibal savages. They demonstrate throughout their part of the film that they are equally as morally suspect as any group of cannibals. Bad, nasty things happen. Roll credits.

I probably won’t watch this again, and I’m fine with that.

Why to watch Cannibal Holocaust: It’s the urdocument for found footage.
Why not to watch: It’s nasty and it’s not particularly good.