[These reviews have been included as a part of Pussy Goes Grrr's Juxtaposition Blogathon!]

Once upon a time, movie studios didn’t hold their best films until the last couple of weeks of December as Oscar bait. In those days, before the maniacal push for the Oscar, perhaps the greatest month of movies ever was June, 1982. Oh, there are better years for movies, certainly. Both 1967 and 1988 have more than 20 films on The List, but I stand by June of ’82 as the single greatest month. In rapid succession, releases included Poltergeist, E.T. the Extra-Terrestrial, Blade Runner, and The Thing. Additionally, Star Trek II: The Wrath of Khan came out this month, and I hold that it should be on the list as the best example of one of America’s greatest cultural exports.

Is it possible there’s another great month out there? Sure, and if I did a little research, I could probably find one just as good or better. But why bother? This one holds a special place for me. I saw four of those movies (all but Blade Runner--I was too young to care about it) in the theater and remember each one vividly. 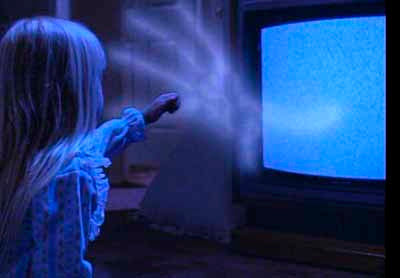 Of the four, Poltergeist was the first to be released. Allegedly filmed by Tobe Hooper, there’s plenty of evidence to suggest that Spielberg, who wrote the story and produced, had a heavy hand in the direction. It looks like a Spielberg film, honestly. There’s a natural progression in terms of lighting, shot, and effects from films like Close Encounters of the Third Kind and Raiders of the Lost Ark to this one to make a pretty solid connection.

This is the story of the Freeling family: Steven (Craig T. Nelson), Diane (JoBeth Williams), and kids Dana (Dominique Dunne), Robbie (Oliver Robins), and Carol Anne (Heather O’Rourke). They live in a fairly standard suburban home, in a newish subdivision. Steven works for the developer selling houses while Diane manages the house and the kids. All is well until one day Carol Anne starts talking back to the static on the television. A few nights later, during a thunderstorm, she speaks to the television again, and some ectoplasmic stuff comes out, burns a hole in the wall of a room, and we get the iconic line, “They’re here!”

These are what Carol Anne calls “The TV people,” and they start causing mischief around the house. During another storm, a tree breaks through the window in Robbie’s and Carol Anne’s room, pulling Robbie into the yard. While the tree appears to be attempting to eat him, Steven pulls him out, and the tree is carried away by a tornado. As all this is happening, Carol Anne is sucked into the closet and what appears to be a parallel dimension in which she can only talk to the people in the house through the television set.

The image of the little girl looking over her shoulder from the static-covered TV is only one of the iconic moments from this film. The other is Zelda Rubenstein, who plays the medium Tangina. A squat little woman, she is on camera only for a few minutes, but her presence in the film is huge, and one of the most memorable things from the film.

There’s also a sense of humor at work here. When a trio of paranormal investigators come to look at the house and to help find Carol Anne, one (Richard Lawson) talks about an event he filmed in which a child’s toy moved a distance of seven feet in seven hours. Steven, unimpressed, opens the room that belonged to Carol Anne, displaying a tableau of moving furniture and flying toys. Another investigator (Martin Casella) has a terrifying moment in the family bathroom. Later, the leader of the team (Beatrice Straight) tells the family that she and the first investigator will be back. The other will not be returning. Earlier in the film, the parents lay in bed smoking pot while Steven, evidently high as a kite, reads a biography of Ronald Reagan. That’s subtle, and funny.

For a PG movie, Poltergeist is terrifying. At one point, when we learn exactly what is going on in the Freeling’s house, Diane is trapped in the unfinished swimming pool. She climbs most of the way out and then slides back in in what is one of the great moments in film in the 1980s. I saw this with friends when it was released. The night I saw Poltergeist, it rained terribly. I had trees outside my bedroom window; I slept in another room.

There are too many great moments in this film to recount. It stands as one of the greatest films of its genre and its decade. Much of it, the iconic lines (“This house is clean.” and “Cross into the light!” resonate as much as “They’re here!”), the ultimate reason for the disturbances, and many of the shots and scenes have woven themselves into American and perhaps world culture. There’s a reason films like this one still get talked about. 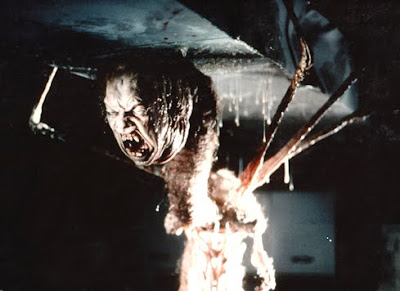 My original plan was to watch E.T. as well, but of these four movies, this is the one I don’t have in my collection. It also happens to be my least favorite of the four. So we adapt and adjust. The Thing and Blade Runner were released on the same day in 1982. Of the two, it’s hard to pick a favorite, but I prefer The Thing. It has nothing to do with the direction, or the story, or the mise-en-scene. It has everything to do with the situation in which I saw the film for the first time.

I was 14, and my parents were gone for the weekend. My brother and sister were supposed to look after me, and while I was certainly old enough to spend a few hours by myself, they weren’t supposed to leave me in the house by myself at night. It happened to be June 26th, which was the day after opening night for The Thing. My brother and sister were dedicated splatter film fans, and desperately wanted to see this. Rather than draw straws to see who had to stay home, they took me, acting as my legal guardians for the night.

While certainly not the first scary movie I’d seen in the theater (Jaws and Poltergeist came first), it was the first time I saw one in the company of my siblings. I was a relatively squeamish 14-year-old, but I gutted this one out. Because of that—because I didn’t cry or hide my face or leave the theater, for that night I got treated like one of the big kids. It’s been one of the many reasons I have loved horror movies ever since.

This is a remake, and it’s far superior to The Thing from Another World from the ‘50s. Our action takes place in a research station in the Antarctic. When some people from a Norwegian station nearby appear to go berserk, the Americans investigate, and find everyone dead. They also find evidence that the Norwegians located something horrible below the ice. Taking back what looks like a mass of melted flesh, the Americans soon discover that the Norwegians did indeed find something, and that something is alive and dangerous.

The critter is a shapeshifter, and essentially each cell of its body is a separate entity. It invades a host, gestates, then splits apart in a spray of gore. After a little while, it coalesces into the shape of its original host—it looks the same and sounds the same, but it is now an alien creature bent on occupying other creatures and propagating itself across the world.

This is a tense film, and for this reason is one of Carpenter’s best. Once it becomes evident exactly what is going on, everything devolves into paranoia. No one can be trusted, and anyone could be an alien menace looking to get someone else alone for a couple of minutes to enact a changeover. It has a lot of similarities to Invasion of the Body Snatchers in that respect.

Two things sell this film. First are the special effects. In 1982, this was as gruesome as a film got, rivaling such splatterfests as Dawn of the Dead for pure, gratuitous entrails. In one scene, for instance, a man’s chest opens up and forms jaws, biting off another man’s hands. When the creature is attacked with fire, the head splits off from the rest of the body, sprouts legs and antennae, and skitters away. It’s completely obscene and completely brilliant. Sadly, the effects aren’t as tremendous 30 years later, but they still work to an extent.

Second, the cast is fantastic. Heading things up is Kurt Russell as R.J. MacReady, the helicopter pilot, and one of the few men who appears to be thinking. His friend and foil is Childs (the always underrated Keith David), whose self-preservationist paranoia is tinged with just enough menace to make him either a huge son of a bitch or one of the creatures from the very start. Wilford Brimley plays Blair, who quickly loses his shit, making Childs’s paranoia look like minor dyspepsia. Running the crew is Gary (James Cromwell lookalike Donald Moffat), who deals as well as he can with the world shattering around him and each man looking out for his own skin…or to get into the skins of the others. Rounding out the cast are the medical doctor, Copper (Richard Dysart); the dog handler, Clark (Richard Masur); the cook, Nauls (T.K. Carter), radioman Windows (Thomas G. Waites); stoner-grunt Palmer (David Clennon); and scientists Norris (Charles Hallahan), Fuchs (Joel Polis), and Bennings (Peter Maloney).

What really makes me the happiest about this film, though, is that the characters often do things that turn out to be huge mistakes, but they do them for the right reasons. Over and over again, they make decisions that look smart until they play out to their logical conclusion and prove to be terrible errors. I love that, because the characters act in a way that, on a first view, I’d like to think I would. And then I discover that, like them, I’d be alien fodder because of it.

I love this film, and bought in on DVD mainly because I wore out my VHS copy a few years ago. Few other films (Invasion of the Body Snatchers being one) create such an intense atmosphere of panic, paranoia, and fear. This is great stuff, and if the effects don’t hold up, every other aspect of the film does.

Why to watch Poltergeist: Proof that PG movies can scare the snot out of you.
Why not to watch: Nightmares.

Why to watch The Thing: It’s hardcore.
Why not to watch: The effects don’t hold up as well as you might like.
Posted by SJHoneywell at 9:38 PM