The Most Accurate Name Ever 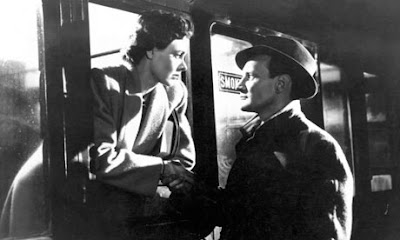 Romance is not a genre I tend to favor. Actually, that’s only partly true. I genuinely dislike romantic comedies as a general rule, but I’ll watch a good romance if the mood strikes me. Note the operative word in that sentence: a good romance. So I gave David Lean’s first great movie, Brief Encounter a shot.

This story couldn’t be simpler or more classically romantic and tragic. Two married people meet, fall for each other, and then go their separate ways. This is not a spoiler—if you’re paying attention, you know exactly what is happening here in the first ten minutes of the film, since the entire story is shown in flashback.

In the central role is Celia Johnson as Laura Jesson, a simple housewife with a husband and two kids. She’s relatively well-to-do, spending her days in London doing the shopping, having lunch out and sometimes taking in a movie. She spends at least part of her day around the train station, and it is here that she meets Dr. Alec Harvey (Trevor Howard). Alec comes to her assistance when she gets something in her eye and he extracts it. Later the same day, they find themselves in the same crowded restaurant and share a table, then go to a movie together. They agree to meet at the same place a week later.

They continue to meet at the train platform and spend their Thursday afternoons together, and it soon becomes evident to both of them (and to us) that the two have fallen deeply for each other despite both being married. They both realize what has happened and the only real possible outcome for this love, but still it continues, because the two can’t stay away from each other.

The pair are discovered twice; first by a couple of her friends in a restaurant and then later when the pair retire to an apartment owned by one of Alec’s friends. Based on these two occurrences, Alec reaches a major decision in his life—to head to South Africa to help create a new hospital. They plan to make the most of the time they have left before he heads off half a world away. The immediate belief here is that the two will probably never see each other again, but if they do, it still will never be the same.

There’s a sense of tragedy around the pair, and we know right away that they are doomed from the start. We know nothing about Alec’s wife and kids. We know precious little about Laura’s kids, but we do see her husband a couple of times. He seems like a stereotype for wealthy and boring, which may well be the reason Laura consented to this sort of affair in the first place, because of her desire for something more.

Despite other members of the cast, only Laura and Alec are fully realized characters here, and that’s as it should be. Other characters are there to judge our two lovers, as foils for their behavior, or as a reason to make a particular decision like Alec does at the end. There’s no space here for anyone else.

The story, as mentioned above, comes to us via a flashback with only spotty glimpses at the present. Laura is, throughout her mental recounting of this affair, wrestling with the reality of her life, comparing Alec on the one side and her husband and children on the other side. Each possibility pulls her in different directions.

Where this film fails for a modern audience is in the timidity of the romance. The two attempt to spend a bit of a night together, but otherwise, they are nearly as chaste as a pair of strangers. There are a couple of passionate kisses toward the latter half of the movie, but otherwise, the romance is actually a little tepid. A few stolen kisses, some smoky glances, and idle talk are difficult to read as romantic on any sort of sustained basis. Remade today, our twin heroes would be splitting the cost of a cheap motel.

Regardless, there’s a sense of tragedy and loss running through this film that is very effective. This is David Lean before he became the master of the grand epic film. What comes as little surprise is that many of the themes he explores in larger, grander films are here as well. Many of Lean's epics focused on the individual story or the story of people together in the middle of a grand sweep. This is that, without the grand sweep.

Brief Encounter lives up to its name. It’s a short one, but lovingly filmed with careful pacing, if too bland in terms of almost everyone in the cast. Watch it with someone you love.

Why to watch Brief Encounter: Romances don’t get more romance-y.
Why not to watch: A couple of mooning kisses equals a lifetime of angst.
Posted by SJHoneywell at 11:58 PM