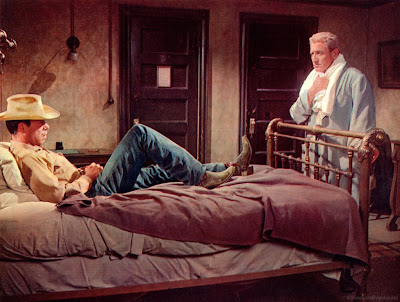 Bad Day at Black Rock is a difficult film to get a handle on in terms of classification. It has elements of film noir, for instance, in its sudden bursts of violence, hidden crimes, and a man who will stop at nothing to uncover the truth. It also has elements of the Western, as a stranger rides (a train) into town and takes on all comers in his battle for justice as well as a number of other Western tropes. And yet, set in the mid-1940s, it is also a modern film, shot in brilliant color. It stars Spencer Tracy—a major star from the classy studio at MGM—but the short running time, lurid title, and criminal elements mark it as a B-picture. But it’s also a message picture. Like I said, difficult to classify.

We start with a train rushing through the desert. The train stops at the flyspeck town of Black Rock. Calling it a flyspeck is being generous. There are maybe a dozen buildings here, a one-horse town where the horse is really just a miniature pony and rented from the next nearest community. This is the first time in four years (remember that) that the train has stopped here, and off steps John J. Macreedy (Spencer Tracy), a one-armed war veteran.

He is immediately regarded with suspicion by everyone in town. Initially, he is hassled by the obsequious stationmaster, then by a couple of cowboys named Coley (Ernest Borgnine) and Hector (Lee Marvin). At the local hotel, he’s told by Pete (John Ericson) that there are no rooms available despite the hotel being completely empty. Macreedy takes a room anyway, takes a bath, and is confronted by Hector again, who complains to all who will hear him that this stranger is too easy to push around—he just gives in.

We learn quickly that the town is run by a local bully named Reno Smith (Robert Ryan), who joins in on the hassling of Macreedy. Unwilling to give in, Macreedy rents the Jeep at the local gas station, run by Pete’s sister Liz (Anne Francis), who is evidently the only woman in town. Liz seems to have something going on with Smith, who is unhappy that she gave him the Jeep. The source of the tension is that Macreedy is looking for a Japanese American named Kamoko, who has a farm out in a place called Adobe Flat. He drives out, and discovers that the well is working, but the house has been burned to the ground. On the way back, he is run off the road by Coley, but he returns to town safely.

We learn a few important things here. First, we discover that Kamoko came to Black Rock a few months before Pearl Harbor, which was four years ago (as in, the last time the train stopped at Black Rock). He has disappeared since. We learn that the local sheriff (Dean Jagger) is a drunk and a pushover. The local doctor/vet/mortician (Walter Brennan) has some backbone and doesn’t knuckle under to Reno Smith, but he’s also apathetic and doesn’t care too much. Importantly, we discover that Macreedy lost the use of his left arm in Italy during the war, and that he was saved by Kamoko’s son, who died in the process. He’s in town to give the medal to the boy’s father.

What actually happened isn’t that hard to discover, and we as the audience have figured out the sad fate of Kamoko (aside from the actual details) long before this is revealed to us. It’s evident pretty quickly that the town has something to hide, and that almost everyone is in on it. Pete refuses to put through calls to the state police, and the stationmaster refuses to send a telegram for Macreedy, bringing it to Smith instead. We know instinctively that Smith and his gang of goons did something very bad to Kamoko because Kamoko committed the sin of being Japanese, and have ever since quashed any rumor or talk about that event. It’s also evident that something similar is planned for the friendless Macreedy, who is stranded in this town until the train arrives the next morning.

The story, then, is one of the first to seriously tackle some ideas of racism. Certainly there were others before this, but none brought it this far into the open. It doesn’t address the idea of the actual internment camps for Japanese Americans, but does pay a great deal of respect to the idea that many Japanese Americans fought bravely in World War II and deserve the thanks of the country. It deals openly with the bigotry of these small town thugs and bullies, for which it should be commended.

The film is helped greatly by some truly stellar performances. While Anne Francis gets third billing, she’s only in a couple of scenes. The rest of the cast is male, making this a very strange town—a movie town in which there are essentially no women and absolutely no families or children. So, while Anne Francis is fine, she doesn’t really carry the movie (and near the end, she runs so completely like a girl that it looks fake). Spencer Tracy is as good as he ever is, and really acts like a man who has gotten used to the idea of having only one functioning arm. As he often was, he is outspoken, firm, and a powerful onscreen presence. Robert Ryan is menacing and cool, a villain who chats amiably with his intended victim, giving him a disturbing and creepy vibe.

But the film really belongs to three other men: Walter Brennan, Ernest Borgnine, and Lee Marvin. Brennan is full of country wisdom and great lines, and plays the role of the town mortician to its fullest. He’s a truly memorable character, dispensing his ideas throughout and is the only person to stand beside Macreedy through most of the film. Borgnine, as an oafish bully who looks to push everyone around based on his size and muscle, is threatening and vicious. But it’s Lee Marvin who really works this film like he’s playing an instrument. He is a coiled spring of menace, laconic, mean, and deadly. Of anyone, his shadow looms the largest over this film—even more so than Robert Ryan’s main villain character.

If I have a complaint, it’s that the film is too short. The ending is great. It’s inventive, creative, and interesting. I could have stood another 20 minutes easily.

Why to watch Bad Day at Black Rock: An impeccable cast and a few surprises.
Why not to watch: Too difficult to classify.
Posted by SJHoneywell at 11:02 PM