Of all genres, slasher movies are perhaps the most maligned, especially those that deal with the unstoppable killer with supernatural power. They tend to be formulaic, silly, and substitute nastiness and gore for actual scares. It’s just the way it is with slasher films. No respect for the genre, and most of that lack of respect is entirely deserved, because really, most of them kind of suck. 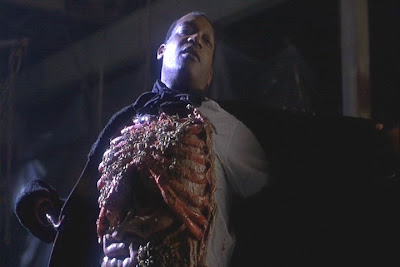 What this means is that when a slasher movie is actually good, it’s something special. It takes a confluence of a number of things to make a supernatural slasher film into something special, which is exactly why there are so few of them on The List. Candyman is exactly this sort of film—it goes into some interesting places, does things in risky ways, and succeeds on almost every front.

Success number one is using a Clive Barker story as a base. Barker is an interesting author and isn’t afraid to really go for it when it comes to including both the sort of gore that the slash-punks love with the sort of creepy vibe and pushes into true horror that generally doesn’t come across in movies.

Success number two comes from basing the film off a relatively well known urban legend. The legend is, naturally, of the Candyman, who can be summoned by saying his name five times while looking in a mirror, according to the legend, which we see played out with a couple of high school kids named Clara (Marianna Elliott) and Billy (Ted Raimi). Pre-getting busy, Billy says the name four times, Clara says it a fifth, and she is ripped apart by the Candyman. How? Well, according to the legend, the Candyman has a hook for a hand.

We get this introduction because a couple of Ph.D. candidates are investigating urban legends for their thesis (although it probably should be their dissertation). Regardless, Helen Lyle (Virginia Madsen) and Bernadette “Bernie” Walsh (Kasi Lemmons) are on the trail of any urban legends they can find, and the Candyman seems to be the most promising. Helen has a mildly adversarial relationship with her husband Trevor (Xander Berkeley), who teaches that University of Illinois-Chicago. They learn that the Candyman is being held responsible for deaths in the Cabrini Green neighborhood of Chicago. (If you’re not in the know, Cabrini was the most notorious neighborhood around.)

They discover some interesting things in Cabrini. The first is that the way the apartments were made in a way that it’s possible to break in from one apartment to the next through the medicine cabinets in the bathroom. While investigating the apartment of a murdered woman, they find that the next door apartment is vacant and contains a shrine of sorts to the Candyman, complete with altar laden with candy and razorblade-filled chocolates. They also meet Anne-Marie McCoy (Vanessa Williams), who lives next door to the murdered woman’s apartment. Like the others in the projects, she holds the Candyman responsible.

Success number three comes from giving us some excellent folklore. We learn at a dinner that the legend of the Candyman comes from a story about the son of a slave who became successful. This son became a renowned artist who fell in love with one of his virginal subjects, getting her pregnant. This caused the girl’s father to enact his revenge, cutting off the artist’s right hand with a saw, stripping the man nude and painting him with the honeycomb from a nearby apiary and allowing the bees to sting him to death. Of course, all of this happened on the site of…Cabrini Green.

And now the fun begins. Back near the shrine apartment in a public restroom where another murder occurred, Helen is confronted by a gang of thugs including one who claims to be the Candyman, complete with hook. He assaults Helen, knocking her unconscious, but she is not killed, and identifies her assailant in a police line-up. Of course, now this man is being held responsible for the other Cabrini murders. And it is here that we come to success number four—we meet the real Candyman (Tony Todd), who is one of the most terrifying screen presences ever revealed. He tells Helen that he exists because people believe he exists, and now that a murderer has been uncovered, belief in him is waning. He wants to kill her to restore the belief in him, but it’s also evident that there is some sexual tension between him and Helen. Today, 20 years after this film was made, this sexual tension would almost be expected, but even in the enlightened early ‘90s, there’s something to be said of a filmmaker creating this sort of bond between the snowy-white Virginia Madsen and the very dark Tony Todd.

From this point forward, Helen’s life spirals into a nightmare of reality and unreality as killings start up again, with her pegged as the culprit, more often than not because she’s found holding a weapon at the scene of the crime. Institutionalization follows, as do more visits from the Candyman, more gruesome murders, and a fairly startling conclusion and a more startling second conclusion. Insectophobes should be warned that there are plenty of bees in a scene here, and this is not for the faint of heart.

Success number five? The soundtrack created by Philip Glass. There is a sense of callback to films like The Exorcist with the classic score, and this does as much to set the mood of the film as almost anything else here. Glass was unhappy with how his score was used, essentially waiting nearly a decade before allowing it to be released as a soundtrack. That was a mistake—Glass evidently saw “slasher flick” without seeing the real art behind this one or the fact that it was considerably different than the standard fare.

It’s also worth noting that Virginia Madsen claimed that for several scenes, she had been hypnotized, lending a more surreal quality to these scenes. I have no idea whether or not this is true, but it’s the kind of thing a strange director might do just for the fanboy factor.

Candyman is a surprise because it is so effective. It should just be another crappy low-budget horror movie with oversexed teens being slain during or immediately after sex, and yet it is not. The people here are adults and act like adults. They get involved in something far beyond their ability to cope with, and it pulls them in terrible and permanent ways against their desires and against their better judgment. The film shoots for and hits the gore factor, the easiest level of horror to hit squarely. It aims for terror, the next level, and hits because there are some really non-gory genuine scares here. It also goes for the ultimate—true horror—and is at least partially successful by mixing this sexual tension with grisly deaths and by portraying exactly what will and has happened at the end.

Three last thoughts. Tony Todd should get more work. He sells the film and looms as its largest presence throughout. Second, while I don’t believe in urban myths like this one, I have not said the name while looking in a mirror even once. Why tempt fate? Third and finally, while I know that something has to go to bring new films onto The List, killing off the best representation of a poor stepchild genre is a sad event. This is good enough to stay in the 1001 Movies List, and it should probably still be there.

Why to watch Candyman: A surprisingly effective slasher film that’s more than you’d give it credit for being.
Why not to watch: You have a weak heart.
Posted by SJHoneywell at 11:52 PM