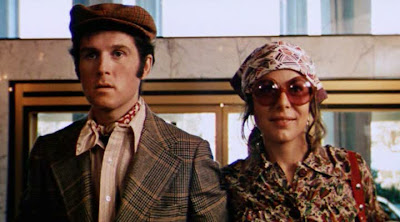 I believe I have said before that I have difficulty with most movies in which I sincerely dislike the main character. If I don’t feel some sense of connection, some level of sympathy for the person who spends the most time on the screen, there’s a large part of me that wants to turn the film off and walk away. This was my essential problem with The Heartbreak Kid, a dark-as-night black comedy about a syndrome common to many people.

Lenny Cantrow (Charles Grodin) has just gotten married to Lila (Jeannie Berlin), and the two have set off on their honeymoon in Miami Beach. We discover a number of things about the couple during the first act of the film. We learn, for instance, that Lila is a slob, can’t sing, and tends to be immature—even infantile on a number of things. She’s a sweet enough kid, but she’s essentially someone who acts about 10 years younger than her real age. What we learn about Lenny is that during the drive from New York to Miami, he’s wondering if he made the right decision in marrying Lila.

In Miami, Lenny encounters Kelly Corcoran (Cybill Shepherd), a young and pretty rich girl from Minnesota. She is cold and aloof, but also devastatingly gorgeous, and treats Lenny much like Princess Buttercup treats Wesley at the start of The Princess Bride (and if you don’t get that reference, shame on you). Lila manages to get a ferocious sunburn on the first day in Miami, forcing her to stay in the hotel room, and giving Lenny the freedom to pursue his blonde shiksa (essentially a tempting non-Jewish woman).

The obstacle in Lenny’s path, aside from the fact that he is on his honeymoon, is Kelly’s father (Eddie Albert). He takes an instant dislike to Lenny, and hides this inexpertly on purpose. Lenny, it would seem, is everything Mr. Corcoran hates.

And so we have our four major players—a guy who wants what he can’t have and doesn’t want what he has; an infantile, immature girl; an ice queen who expects that she’ll get what she wants; and a glowering old man who, because of the situation, is the most understandable and sympathetic. The comedy comes initially from Lenny’s elaborate and frequent lies to Lila about exactly what is going on outside their hotel room. She recovers from her sunburn while Lenny does everything but hump Kelly’s leg. Much of the middle part of the film concerns Lenny’s failing and flailing around Kelly’s father and his unfortunate attempts to impress the man.

I can’t fault the story, really. It’s just on the edge of what I’d call believable behavior. I can’t fault the acting, either. I tend to like Charles Grodin quite a bit, and both Eddie Albert and Jeannie Berlin earned deserved Oscar nominations (especially Eddie Albert), and both won film critics’ awards. But there’s a part of this film that’s like biting down on metal for me. I had serious problems getting past it, and found the middle 20 minutes or so to be excruciating. I knew I had to bull my way through, but didn’t want to. It was almost like painful elective surgery. I knew it would be good for me to get it behind me, but I didn’t want to have to go through it.

I have no idea why I had this reaction to the film. There is some real brilliance here. When Lenny makes the admission to Kelly’s father that he’s not only already married, but a newlywed, the expression on Eddie Albert’s face changes slightly, almost imperceptibly, but the change is one of the nicest jobs of acting I’ve seen in awhile. Just as entertaining in this scene is Kelly’s mother (Audra Lindley), who goes from a pleased expression to one of aghast shock over the course of several minutes. The film works (evidently for many people but me) because it understands that underneath a comedy lurks tragedy, and this has that in spades. It's a layer of comedy-flavored frosting on top of tragedy cake.

What’s interesting about this film is the length of the scenes. Some, which consist of little more than a few people sitting at a table discussing essentially Lenny’s lack of fulfillment with his current life, go for 10 minutes or more. There’s a sense of intimacy here that is unmistakable for anything else, and since the intimacy exists for the revealing of painful and depressing truths, the feeling is as if these truths are being revealed to us personally, which in a way, they are.

In a nutshell, this film is about a man who always sees the grass as greener somewhere else. It’s about people who will stop at nothing, including destroying the lives of others, to get what they want. Lenny is a man who doesn’t want anything he gets. It’s the pursuit, the not having something, that drives him, and once he achieves something, it’s no longer desirable. If you think that’s a spoiler, you might be right.

The big question is how this film ended up on this list. When I think of the other films that could have been added here…Everything You Always Wanted to Know About Sex (But Were Afraid to Ask), Last House on the Left, and Silent Running are all more deserving in my opinion, and these are just more deserving films from 1972, the year of The Heartbreak Kid’s release. Ask me to decide, and I’d leave this one off, even with its surprising ending.

Why to watch The Heartbreak Kid: Bad things happening to bad people.
Why not to watch: Every character needs to be punched in the face.
Posted by SJHoneywell at 7:21 PM

Email ThisBlogThis!Share to TwitterShare to FacebookShare to Pinterest
Labels: comedy, Elaine May, The Heartbreak Kid