Films: Intolerance, The Thief of Bagdad
Format: Streaming video from NetFlix on laptop. 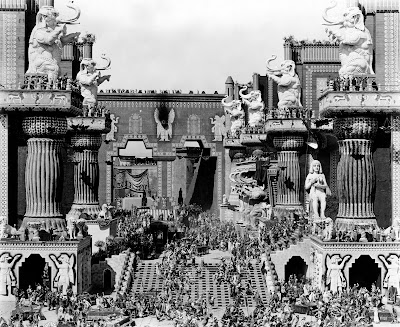 When D.W. Griffith filmed The Birth of a Nation, he simultaneously invented modern film and created a storm of controversy. In an effort to soften that criticism, he produced Intolerance, the biggest, longest, and most expensive film ever created, at least for its time. Intolerance weaves four stories of intolerant behavior—three from history and one from Griffith’s present day—to show the terrible damage cause by judging others harshly and, well, being intolerant. Should you sit down with this one, be prepared to be hammered with the world “intolerance” virtually every time the story switches from one era to the next.

What Griffith does, rather than run each story through from start to finish, is skip back and forth between the four, spending the most time in the present day and in the oldest story, which takes place in ancient Babylon. It’s likely that the first story had the most interest for people of the time and it’s absolutely true that the Babylonian story, with its massive sets, huge crop of extras, and live freakin’ elephants was the most expensive, and he wanted the most bang for his buck there. What this means is that each story essentially builds to a climax at the same time and resolves at the same time.

The four stories are:
Babylon, the siege of the city by Cyrus, aided and abetted by the disgruntled priest of Bel-Marduk, upset that worship has turned to Ishtar instead of his god.
Judea, Christ against the Pharisees and Christ’s eventual crucifixion.
France, and the persecution and destruction of the Huguenots under Catherine de Medici and Charles IX.
And Modern, unrest, strikes, and temperance, leading to moral outrage from moneyed individuals who hold themselves superior to the working class.

The three historical stories all show the terrible consequences of what can happen because of intolerant behavior, and links between the stories come in the form of Lillian Gish acting as a sort of universal mother rocking a cradle, undoubtedly the easiest payday she ever scored.

While this does contain four distinct stories, only two have any real meat on them. The Christ story is almost non-existent to the point where it becomes difficult to recall anything from it. The Pharisees hold themselves above the common masses of the people, Christ here is depicted as the sort of ultimately tolerant individual he was, and he is crucified for defying the wisdom and influence of his elders. Perhaps it’s safe to say that Griffith gave the story so little traction here because it was (and is) such a familiar story to his viewers. Similarly, the French story holds little more than Catholics getting pissed off and killing scads of Huguenots, and disrupting a wedding.

The modern story concerns the destruction caused by the alleged good intentions of reformers, who actually do more to destroy people, tear apart families, and create crime than perform any positive service. This is shown by giving us the story of people who, through circumstances, are treated as emblematic of the problem in the eyes of the reformers, but who are essentially innocent of the crimes of which they are convicted. The intolerance of the reformers blinds them to anything but the necessity of getting their reforms across, whatever the cost, and no matter who is ground down in the wheels of their justice.

The big story, with the cast of thousands and the massive sets, is the Babylonian story, which probably could have (and perhaps should have) been the entire film. Here, religious intolerance leads to the complete destruction of Babylon, and lives are ground down under the wheels of an onrushing army, all because a priest was dissatisfied with the fact that his ruler and the people had turned away from his god.

In this story we get some of the most magnificent battle sequences ever filmed. The sets here are tremendous, and the cast is massive. Thousands of people throw rocks, get hit by arrows, and move massive siege towers into place against huge walls created for the film. There are some really fine bits here, with towers being knocked over and a couple of decapitations that certainly would have shocked people 100 years ago (although through modern eyes, the trick is an obvious one).

What’s really noteworthy here is that again, Griffith did things that no one had done before. We have huge crane shots over Babylon, crane shots with moving cameras that really look like modern camera work. And, even today, 95 years later, the sets are still staggering. It’s the spectacle that makes this worth watching.

What’s difficult for the modern viewer is the typical overacting and overreaction of silent film actors. The Mountain Girl, for instance, takes part in the battles in an effort to help protect her beloved Belshazzar. She launches an arrow, then points to it, and jumps up and down. Yes, you launched an arrow. Good for you. In the middle of battle at one point, she spots Belshazzar and moons over him while around her, people are dying. It’s the sort of thing that to a modern audience makes silent film difficult to take seriously. Her realization of the treachery of the Priest of Bel comes with so much eye-bulging and double taking that it becomes comic.

Doubtless Griffith wanted these characters to be iconic, which is why most of them don’t have names. The accused in the modern story is known only as “The Boy” and his wife is “The Dear One,” while the girl in the French story is called “Brown Eyes.” In general, the bad guys have names—they are specific, but our heroes are known only by what type they are.

Intolerance, for all its epic sweep and profound greatness, is a film without a time. When it was made, audiences reacted by staying away in droves, bankrupting Griffith’s production company. Today, the acting is too extreme, and everything too melodramatic to have any traction with a modern audience. This is a rough ride—watch only for study, and for the giant battle sequences. Otherwise, it’s a few hours of preaching, bad behavior, and overacting. 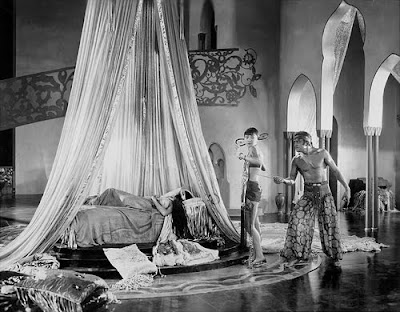 If you think that the actors in Intolerance overdo it, it’s only because you’ve never seen Douglas Fairbanks in The Thief of Bagdad. There isn’t a gesture here that can’t be made grander, or with a larger sweep of the arm. Seeing a dish of food he’d like, he smacks his lips and rubs his hand over his stomach from groin to chin.

Fairbanks, as might be determined from the previous paragraph, is the eponymous thief. The opening sequence shows him doing what he does. He filches purses by feigning sleep near a drinking spot, climbs walls and takes food, and steals a magic rope when its owner bows in prayer after being called by the muezzin. He also offers a speech to the clerics of Allah, saying that he looks for no reward in the next life. Instead, he takes what he wishes; this is a speech repeated a few minutes later by a Mongol prince, who has set his sights on Bagdad for his own.

To get it, he’ll try to win the hand of the Princess of Bagdad. To do so, the suitor must return with the rarest of treasures. The thief originally breaks into the palace of the Caliph of Bagdad to steal goods, but becomes so enamored of the princess that he decides that she is the true treasure. He first feigns being a prince himself, but is found out and flogged for his trouble. However, once he discovers what must be done to win the princess, he sets out on his own journey, fraught with peril, terrible monsters, and the treachery of his opponents for the princess’s hand.

At a touch longer than two-and-a-half hours, it would be nice to think that there’s more to the plot than this, but more really isn’t needed. Like the Babylonian scenes in Intolerance, the sell here is the spectacle on the screen. While the sets are huge and grand and a number of scenes have a large crop of extras, that’s not the focus. The focus is on the effects and on the talents and charm of Douglas Fairbanks.

Fairbanks is really something special. He was famous and a star back in the 1920s for the exact same reason that Jackie Chan is famous today—he looked like he could do anything, and made it look easy. In fact, while Chan often takes both a real and an apparent beating in his movies, Fairbanks does his stunts with a smile on his face. He is a tremendous acrobat, making everything he does look as simple as walking down a staircase. Naturally there were some tricks here—in one scene hidden trampolines aid his jumps, for instance. But many of these stunts were him and him alone. He moves with the natural grace of a dancer and the skill of a trained athlete. Few actors in history have had this natural gift, and fewer still used them so well and to such good effect.

As far as the special effects, it can be difficult to judge in this modern world of jaded viewers and films like Avatar and Inception. Still, for their time, they are ahead of the game, and while there’s no shock of how these effects were pulled off, several of them still look great and still work. What are the effects? Well, there’s a giant lizard monster, a bat creature, an undersea expedition complete with giant deep sea spider, and a winged horse that really looks great. The magic carpet is a nice effect, too. They all pale to the soldiers who appear from clouds of smoke, though. All in all, it’s impressive enough that it must have been cause for great discussion 85 years ago, and today is still good enough to be worth noting.

Sure, this film is overacted and melodramatic. And? It’s also a great deal of fun, filled with adventure and entertainment. If Douglas Fairbanks makes too much show of everything he does, who really cares? This is really the first non-comedy silent film I can say I have truly been entertained by, and that’s worth the price of admission.

Why to watch Intolerance: It’s grand in a way few films have ever been.
Why not to watch: Being hit over the head with message/message/message is never pleasant.

Why to watch The Thief of Bagdad: Stunts you won’t believe aren’t trick photography, and some of the greatest early effects ever made.
Why not to watch: Crazy, crazy melodrama.
Posted by SJHoneywell at 7:11 PM