There are plenty of films in this world that make the average movie viewer distrust the serious film critic. Much of the catalog of Fellini, for instance, falls into this broad category. Films with really long takes, not much happening, huge pauses, shots of empty places, dry dialogue scenes, incomprehensible plots, and other staples of art films seem to thrill critics and both bore and frustrate someone who simply watches films for entertainment. 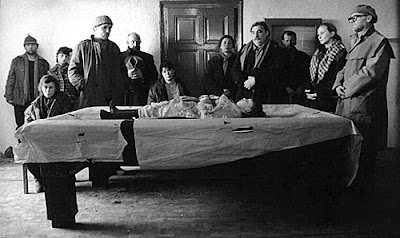 And thus we come to Bela Tarr’s Satantango (Satan’s Tango), a film that is the epitome of heralded art film that those not serious about movies will encounter initially with curiosity, then boredom, then frustration, and then outright anger. I admit, even though I consider myself more serious than most about studying film, this one was a trial. I’ve been watching it in bits and pieces for a couple of weeks—a necessity when the discs come one at a time from NetFlix and the film spans a full three DVDs.

Tarr’s style has been compared with that of Tarkovsky, and with good reason. This film takes the idea of a long take to ridonkulous levels, with some shots going on for ten minutes or more. In the full seven-plus hours of the movie, Tarr claims that there are only 150 different shots, and having seen the film, I don’t doubt that this is true. This is broken up at times with slow pans or tracking shots, but even these are a relative rarity for some long sequences.

The story concerns a failed collective farm in Hungary. The people are broke and broken, and spend their nights drinking, dancing, and stumbling around in a local bar. A conman they thought long dead returns and sells them on a dream of a new collective, a model farm, that will require their investment if they are to make it work. A bunch of them leave for the new place. And really, that’s the bulk of the film. Most of the time, people sit around drinking and waiting for something to happen, and it’s about as exciting to watch as it sounds like it would be.

But this film isn’t about excitement, and not all films should be. This is a meditation, perhaps on the failed Hungarian system or on the process of life itself. Certainly it’s bleak enough both in terms of how it is filmed and the story that transpires that it wouldn’t be difficult to assign this meaning to the film.

More than any other film, I’m reminded in parts of Chantal Ackerman’s Jeanne Dielmann, which couldn’t have been more of a trial for me had it been injected directly into my cerebral cortex. Tarr’s film has more happening, though, and is also in many ways an easier watch despite being twice the length. Many of the shots, while they seem eternal, are strikingly beautiful. While the film concerns itself in many ways with the banality of the existence of its characters, the ugliness of their environment, the terrible rainy weather, and human misery, there are a number of extended shots that are truly gorgeous.

Where Tarr loses the average viewer, and in many places lost me, is just how long he holds his camera in the same place without anything happening. We get close-ups of people that last for thirty seconds or a minute with no dialogue. Nothing happens. At times, I had to check to make sure the DVD hadn’t frozen, because nothing on the screen moved for half a minute, and just when I was getting ready to check, someone spoke or the camera twitched. Shots like this require intense patience both on the part of Tarr and on the part of the viewer, and this patience can be rewarded. These shots, for their lack of any action, are revealing in giving us genuine looks at the characters.

And yet, it could also easily be argued that there are far too many of these shots. Someone leaves a room, and the camera sits on the open door for upwards of a minute, an unchanging tableaux, until we are given a new shot. We watch people walk, camera in the face, with a background of unbroken gray clouds. At one point, a girl named Estike runs through the woods for what seems like a couple of miles, the camera tracking in front of her. In another scene, people sit around the bar while a man talks endlessly, repeating the same five or six lines over and over. Later, we watch people dance and act drunkenly for ten minutes or more while an accordionist plays the same few notes over and over. Tarr pulls no punches with shots like this—he opens the film with seven or eight minutes of cows walking in a paddock and a very slow tracking shot.

Perhaps the most difficult part of the film to watch comes in the middle, when Estike brutally tortures a cat. This may not sound like much, but this is painful to watch, and like every scene in this film, it continues far longer than it feels like it should to get the point across. Later, the girl spikes a bowl of milk with rat poison and forces the cat to drink it, saying over and over that she can do whatever she wants to the cat because she is stronger than the cat. Following this, the girl watches the drunken elders dance, then swallows the rat poison herself. It’s this sequence that caused the film to be at least temporarily banned in the U.K. despite Tarr’s assurance that there was a vet on hand the whole time, and his statement that the cat in question ended up as his personal pet.

Within the context of the film, we cover the same ground repeatedly. We see action from one perspective, then see the same action from another perspective later. The girl watches the dancers, for instance, and later, we watch the same scene from inside, catching glimpses of the girl standing in the rain.

Satantango was filmed to mimic the dance: six steps forward and six steps back. It’s a subtlety that is easily lost without being made aware of the fact, a statement true of many things in this film.

Is it good? Unquestionably, this is art film at one of its highest points. Tarr’s work is carefully crafted, smart, and unflinching. It’s also difficult to like. In other words, I’m impressed with the effort, the message, and the artistry here, but like many great works of art, it’s not something I want to spend a lot of time seeing. I went 43-plus years without sitting through this epic; I’ll happily go another 43-plus without doing it again.

Why to watch Satantango: This is art for art’s sake.
Why not to watch: A new definition of “long take.”
Posted by SJHoneywell at 11:41 AM