She Take My Money...

Musicals of the early era of talkies are their own thing. They have a particular pattern to them and a particular method of getting from start to finish. Much of the time, there are multiple road blocks thrown up in the path of, well, putting on a big show. In the end, everything comes together at essentially the exact same time, the show goes off, and everyone who should go home happy does. Most of these musicals were created as a sort of antidote for the Great Depression, and feature upbeat numbers, happy endings, and people who start out down on their luck and end up either in a hit show or happily married, or wealthy, or some combination of the above. 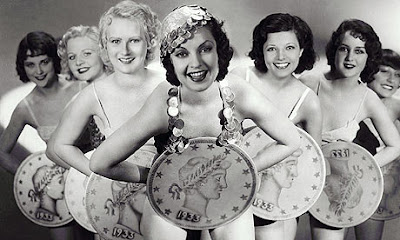 So it comes as no surprise that Gold Diggers of 1933 follows essentially this exact formula with a cast of characters that have become stock and a cast of actors that did this same basic show over and over (as a matter of fact, about half the cast also appeared in 42nd Street from the same year).

So let’s get to the nuts and bolts of this one. Four showgirls have their show closed a day before it opens, putting them back on the skids with rent due and with their stomachs empty. These four are Polly (the actually quite adorable Ruby Keeler), the juvenile ingénue; Trixie (Aline MacMahon), the funny one; Faye (Ginger Rogers), the pretty one; and Carol (the lovely Joan Blondell), the singer. They get word of a new show being produced by Barney Hopkins (Ned Sparks), and he’s game to use all of them in the show. The problem is, as usual, no cash.

The cash, as well as the music for the show, comes in the form of Brad Roberts (Dick Powell), a songwriter who lives across the alley from the girls and who is in a mutual sighing-at-each-other conspiracy with Polly. Barney hires Brad to write the music for the show and Brad promises $15,000, a promise he delivers on the next day. However, Brad flat-out refuses to take part in the show itself. He just wants to write the music.

On opening night, the male juvenile, who is actually approaching middle age, suffers an attack of lumbago, forcing Brad into the stage role. It is here that he is discovered. Brad Roberts is actually Robert Treat Bradford, the scion of a wealthy Boston family. His brother Lawrence (Warren William) and Lawrence’s assistant Fanuel H. Peabody (Guy Kibbee) arrive to talk Brad/Robert out of his career and especially out of his desire to marry Polly. He won’t listen, which forces the two interlopers into a confrontation with the girls.

In a twist that would no longer work in a film today, Lawrence and Fanuel show up at the girls’ apartment and confront not Polly, but Carol, assuming that she is Polly, and not letting her get a word out despite the fact that she tries multiple times to tell them that they’ve got the wrong girl. She and Trixie decide to take the two for suckers. The men believe that all show girls are really gold diggers (hence the name), so they’ll play the parts. And hilarity, allegedly, ensues.

This, in a nutshell, is why many musicals don’t work for me. All Carol has to do at a critical juncture is say, “I’m not Polly!” and the entire second half of the film unravels. All those whacky hijinks are certainly there for the show tune crowd who appear to survive on a diet of such things, but I need a greater dose of realism in my story. Everyone we’re supposed to root for is just a little too clever and everyone who we’re supposed to dislike is just a little too foolish or a little too stupid to work for me. The girls especially are a little too wisecracky (especially Trixie) and a little too streetwise for me do much but roll my eyes.

Okay, the numbers are pretty good, and “Petting in the Park” is a show-stopper that comes at the end of the first act, and the “Forgotten Man” number is great as well. But with “Petting,” they’ve staged a number that is supposed to be taking place on a stage, but features a segment in a park with grass, a terrifying “baby” played by Billy Barty, and a freakin’ rainstorm. In a theater. In the 1930s. Yes for a movie, no for a stage, and yet when the number ends, we see an audience clapping away. These numbers are pure Busby Berkeley, and they look it, and for the musical spectacle of the era, they’re top of the line, but they miss on the “actually in a theater” part.

Since this is a feel-good musical from the Depression, there shouldn’t be a lot of surprises on how it turns out. If you can’t see at least a third of the ending coming at you an hour before we get there, it’s only because you haven’t seen many movies of this era, or many movies that feature either “romantic” or “comedy” or “musical” in the genre description. Since Gold Diggers of 1933’s description includes all three, there’s not a single reason in the world to be surprised at the ending the minute we get past the 20-minute mark and most of the characters have been introduced.

Does it have anything going for it? Well, fans of the genre will find a great deal to enjoy here. I’m not a fan of the genre, so I have to dig a little harder. Twist my arm, and I’ll say that Ruby Keeler and Joan Blondell are, despite the black-and-white footage and the whole 80-year-old movie thing, are sweet, sweet balm for long-suffering eyes. They’re absolute dolls, and they make the film worth seeing, at least in parts.

Ultimately, though, this one is silly and fluffy without much in the way of substance. I can take it or leave it, and nine times out of ten, I’d choose to leave it.

Why to watch Gold Diggers of 1933: Elaborate Busby Berkeley dance numbers and a lot of wisecracks.
Why not to watch: If you can’t see through it, you’re a moron.
Posted by SJHoneywell at 9:44 PM