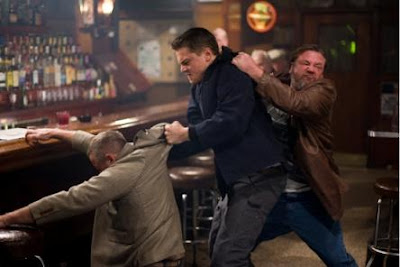 There’s a trend in Hollywood to remake anything and everything. This is news to no one, of course. Many of these films are remakes of Asian titles. This is particularly true when it comes to horror movies, but it happens other places as well. Of the non-Asian remakes of Asian films, none climbed so far as Martin Scorsese’s The Departed, a remake of Infernal Affairs from Hong Kong.

For a film that runs a good two-and-a-half hours, The Departed has a remarkably simple plot. We have Irish mob in Boston. We have a kid who grows up in the mob and joins the state police specifically to act as a mole for the mob boss. At the same time, we have another potential officer who leaves the academy specifically so he can act as a mole for the state police in the criminal organization. The two moles hide from each other and hunt for each other. Essentially, that’s it.

Okay, it’s more complicated than that. Frank Costello (Jack Nicholson) runs much of the crime in Boston. He recruits a young boy named Colin Sullivan (eventually played by Matt Damon) who grows up to join the police academy. Colin has all of the outward appearances of being a cop’s cop—his record is completely spotless. But, of course, he’s working for Frank Costello, alerting Frank to raids, problems, and issues within the Massachusetts State Police so that Frank can act accordingly.

Simultaneously, we are introduced to Billy Costigan (Leonardo Dicaprio), who is also in training for the state police and at the academy. He’s pulled aside as his training nears completion, he’s pulled into an office to meet with a couple of the higher ups: Captain Queenan (Martin Sheen) and the surprisingly antagonistic and foul-mouthed Sergeant Dignam (Mark Wahlberg). They want to bust Costigan out of the academy, arrest him for a crime, throw him in prison for a few months, and then release him in the hopes that he can work his way up into Costello’s organization. So perhaps, honestly, it’s not that much more complicated than I had originally thought.

We get a little bit of complication in the person of Madolyn (Vera Farmiga), who becomes Sullivan’s girlfriend and Costigan’s court-appointed psychiatrist, creating a further connection between the two men. They run in circles around each other for the whole movie, Sullivan attempting to keep his true identity as Costello’s mole silent and put on a good show for everyone else while also trying to find the mole in Costello’s organization while Costigan reports to Queenan on the sly, participates in a variety of crimes, and hunts for the identity of Costello’s man in the state police office. They come close to bumping into each other a few times, but everyone is keeping quiet about the moles everywhere.

They also come close to bumping into each other when Costigan makes a play (successfully, mind you) for Madolyn’s affections despite her having moved in with Sullivan. This is one of those spots where I take issue with a film like this. Madolyn has just moved in with the man she claims she has a serious relationship with, and she hops right into bed with the first attractive, troubled guy she can find. I have trouble buying that.

Anyway, this is not a film that really needs more plot than already outlined here. The story, the thing that is interesting to watch, is the actions and reactions of the two men as they attempt to con people with their real identities and still perform their jobs like part of the team.

The other reason to watch is for the astonishingly good cast. In addition to the actors mentioned above, Alec Baldwin plays Captain Ellerby, a by-the-book cop who comes across as both a blowhard and a straight shooter. His role is vaguely comedic, but it serves as an important part of the film in creating the cop world. He’s a bureaucrat and a politician, but a good one, and he comes across as being completely believable.

That said, it’s Nicholson that puts butts in the seats, and he does not disappoint. The man is a true master of his craft, indicating vast amounts of information with a hand gesture. He’s unpredictable and dangerous, and with Nicholson playing the part, he is realistic as a crime boss who appears to thrive on personal chaos and the pursuit of fleshly sins and concerns. With a quick smile, Nicholson is capable of disarming anyone…or freaking them the hell out. He does both a lot in this film, sometimes within a single scene.

Ultimately, this is an excellent film. It just seems so wrong to say that Martin Scorsese has anything to do with anything like a remake.

Why to watch The Departed: Casts like this happen about once every 5 years.
Why not to watch: Scorsese doing remakes? That seems so wrong.
Posted by SJHoneywell at 11:52 PM