It's a Jazz Thing...You Wouldn't Understand 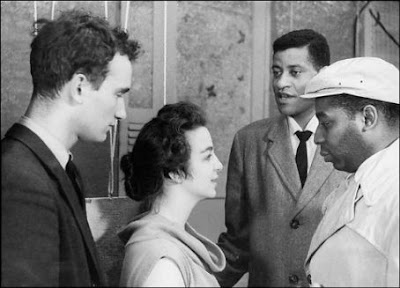 It’s not that original to make a movie about racism, and it wasn’t really terribly original back in 1959 when John Cassavetes finally released his revamped version of Shadows. It probably wasn’t too unusual to make a film about jazz musicians and hipsters, either. What was unusual was making a real film about real issues on a tiny budget.

Shadows is the story of three siblings: Hugh (Hugh Hurd), Ben (Ben Carruthers), and Lelia (Lelia Goldoni). All three of them are involved in beatnik culture to some extent. Hugh is a singer very much in the style of Nat King Cole, which is less hipster than traditional. Ben is a jazz trumpeter. Lelia writes, although she doesn’t really want to that much. The three are, from eldest to youngest, less and less black, at least in appearance. Hugh has traditional African features and dark skin. Ben could pass for Middle Eastern, or perhaps Italian. Lelia looks Caucasian and has very light skin. This becomes an important plot point very quickly.

It happens when Lelia meets Tony (Anthony Ray) at a party. The two are quickly interested in each other and leave together. He takes her up to his place and the two have sex—it’s the first time for her, and it’s unpleasant for her. She reacts badly to it and wants to go home, so he takes her there.

And it’s here that the problem begins. When Tony meets Hugh, he realizes Lelia’s ancestry and he leaves. This is an awakening of a sort for Lelia, and she quickly latches on to Davey (David Jones). Meanwhile Ben and Hugh fight—Hugh can’t understand Ben and Ben is filled with a sort of unfocused anger that sometimes lashes out.

Let’s be frank here; Shadows is hardly the best acted film ever created. It was done essentially without a script with mostly amateur actors improvising their lines in each situation. It’s also Cassavetes’s first film, which means that he hadn’t really discovered his voice as a director yet, making the film feel unfinished and rough.

In short, it feels a like a real amateur film. A lot of the camera work is stilted and stiff. A lot of the dialogue is equally stiff and weird in places. Hugh is excellent, and of the three siblings, is the nice one and the responsible one. Ben is also good as the young tough, the punk who carries a chip on his shoulder the size of New York. Lelia’s performance is more unusual. It’s broad in places, whiney in others, and very natural in other spots. It’s the most uneven of the three actors, certainly.

While not a particularly difficult film to watch, there’s a strange ennui connected t this film for me. I expected it to go somewhere much more than it did, and in that respect I was disappointed with it. I’m not sure if I expected Cassavetes to blow the proverbial lid off the racism problem, but I certainly expected more than a relatively short confrontation between Tony and Hugh followed by Tony virtually disappearing for the rest of the film.

Cassavetes went on to make a number of great films, and much of what he started in Shadows is evident in his repertoire of movies that followed this one. It’s an interesting beginning for his career, if not as particularly strong as I had been led to believe. This one is all about the style—all about how it was filmed rather than what specifically was filmed. Watch this one, because without it, the entire independent cinema movement would have taken much longer to get off the ground. And when watching it, try to see it for what it is—essentially a film about the characters, and in many ways a film about acting and filmmaking instead of being a film about a particular story.

Why to watch Shadows: The birth of independent film.
Why not to watch: It's amateurish.
Posted by SJHoneywell at 11:43 PM