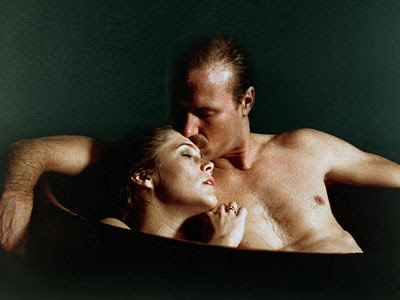 Body Heat is a film noir, and except for the very end, it follows all of the conventions of the genre. This means crime, murder, extortion, dangerous women, and sex. However, since Body Heat was made in 1981, the sex no longer has to be implied. This means a lot of nude time with stars Kathleen Turner and William Hurt. You can decide for yourself if this is a good thing or a bad thing. However, as I said previously, in the 1980s, Kathleen Turner was hot monkey sex incarnate, so we’re going to consider this not a good thing, but a really, really good thing.

We first meet lawyer Ned Racine (Hurt) as he is essentially forced to take a plea deal from the judge overseeing his current case. It’s evident that Racine is exactly the sort of shifty, no-account lawyer that is a stereotype in films like this one. It’s not that Racine is specifically a bad lawyer, it’s more that he’s always looking for a chance to make a big score. Because of this, he tends to walk the line between legitimate lawyer and crooked bastard.

Despite these tendencies, Racine is good friends with assistant prosecutor Peter Lowenstein (Ted Danson), and the two trade insults and jokes in a diner near the courthouse, and trade quips with the staff at the diner about the lousy air conditioning in the brutal Florida heat. That night, Racine encounters Matty Walker (Kathleen Turner). She’s rich and lonely, and the two flirt a bit with each other, but she leaves.

They run into each other again in a bar in her town. He’s gone looking for her, and finds her, and they flirt again. She talks about her wind chimes and he says he’d like to see them (and quite a bit more, naturally), and she invites him to the house, then asks him to leave. He does, but the desire is just too strong, and he uses a lawn chair to smash his way back into the house, and we get round one of their frequent, rabid sexy time.

Matty confesses to Racine that she is dissatisfied with her husband, Edmund (Richard Crenna). He’s an investor in a variety of local projects, and there’s a strong indication that much of his money comes from places on the wrong side of the legal barrier. Edmund is locked up in a number of deals with some very dangerous people, which doesn’t really bother him. Why? Because he is also very dangerous people. Racine bumps into the couple on accident at a restaurant, and he and Matty bluff their way through how they know each other, and Edmund invites the lawyer to come sit with them. They do, and it soon becomes evident that Edmund is a very dangerous man who might actually want his wife to have an affair if only so that he could have the pleasure of killing the guy with his bare hands.

In shades of Double Indemnity, the murder goes off. Racine has met with an old client named Teddy Lewis (Mickey Rourke) who has done time for arson. Teddy has rigged up a device for him. Racine places the device in one of Edmund’s properties, dumps the body, and sets off the explosive, burning the place down. For a few days, all is well.

And then the complications start. Edmund’s body was found without his glasses, and he was obsessive about them. Racine gets a call from a Miami law firm about the new will he drew up (even though he really didn’t) and the problems that there might be with it. More and more, Matty seems to be doing everything she can to get him implicated in her husband’s death, but Racine can’t stop going to see her. Evidently, the sex is just too damn good (and it does definitely have that appearance, just for the record).

I won’t spoil this, except to say that the film takes some license with the end of the traditional noir, or at least the noirs of the late 1940s. This is not necessarily a bad thing unless you are a purist, which I am really not. The plot takes a number of vicious turns, and at the end, the turns get faster and faster, and harder and harder to keep up with. But in every case, it’s completely compelling.

One of the more interesting stories going on is the relationship between Ned Racine and his friends, Peter Lowenstein and police sergeant Oscar Grace (J.A. Preston). As the evidence in the case begins to mount up, they keep returning to the conclusion that Racine must be involved in the murder somehow, but both do everything they can to look for a possible way that he could maintain his innocence.

It’s also worth saying that what happens with about 10 minutes left is inevitable. The last five minutes, however, are not, and it’s these last five minutes that break with noir tradition, and also make the film completely awesome.

Beyond the intricate and excellent plot, the sell here is the sex, and there’s a lot of it. There are quite a few just-above-the-butt-crack/pubic-bone nudity shots of both Hurt and Turner. The Florida summer being what it is in this film, there’s a constant desire on the part of the characters to wear as little clothing as possible as often as possible. This means you can expect to see a lot of skin throughout. Take this as a positive or negative as it (birthday) suits you.

Why to watch Body Heat: A great plot and no answers until the end, with the added bonus of lots and lots of sexy time.
Why not to watch: It messes with the traditional noir formula.
Posted by SJHoneywell at 4:53 PM