A number of other 1001 Movies bloggers are quite a bit brighter than I am. That goes without saying. Specifically, though, they are smarter than I because they made a concerted effort at the beginning of their personal quests to watch all of the silent movies right away. I have not been nearly that smart, although as of late I have been trying to rectify that. This is my fourth silent film in the last week, and there’s at least one more coming pretty soon. 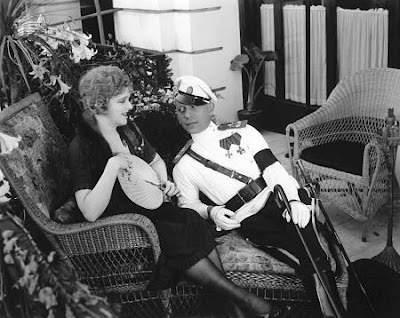 Foolish Wives comes out of my personal collection. I found it a few months ago in a resale shop for a couple of bucks and picked it up because I recognized the name. That may have been a mistake—I don’t know if this film is in the public domain, but I’m sure I could have found it elsewhere and spend those couple of bucks on something I’d have enjoyed more. Another movie, perhaps, or a couple of burritos. Several times in the past I have watched a film and thought to myself, “I am watching this…why?” In this case, the question is, “I paid money for this and am watching it…why?”

I can’t really tell you why I spent time with this film. I have three layers of complaints. We can start with the easy layer first. The history on this picture suggests that von Stroheim’s initial film ran something along the lines of eight hours. When confronted by his studio as to how people could reasonably watch this in an evening, von Stroheim is alleged to have commented that the film was perfect, and presenting it to an audience wasn’t his problem. I have to wonder what the man was thinking—the film barely sustains a length one quarter of that. Be that as it may, the film has been chopped a number of times; there are versions running past the three-hour mark and one running less than 90 minutes. It is what it is.

The second layer of complaint I have is specific to the version I watched. It’s a punishing DVD, with only six scenes, each one relatively equal in length. The scene breaks are less natural pauses and more places selected arbitrarily, with a new “scene” starting in the middle of a title card or an actual scene. It can’t be that difficult to break this up into actual segments, can it?

Further, the music selected for this version of the movie is ridiculously bad in terms of matching up with the story. It’s almost as if someone merely selected music based on length rather than mood. If the film is legitimately as great as its press clippings, then someone should take the time to write an actual score for it. The action on screen rarely matches the music cue. At one point, the main character’s maid is crying, and the music is a lighthearted dance played by a string quartet. Earlier in the film, we get a massive orchestral hit when a man picks up the phone to order a room service breakfast.

Additionally, the print is quite muddy in spots and rough. Again, if the film is so great and so important, why hasn’t anyone bothered to remaster it? There are splotches and blotches, speed ups and slow downs, fuzzy spots, and a few place that look quite a bit like the film was impressed with an imprint of burlap. All in all, this makes for a painful viewing experience. I can live with that if the film is worth it, but it certainly affects my opinion and the overall experience. I try to remain conscious of such problems, but there is only so much I can do to prevent myself from being swayed to the negative by such carelessness as the mismatched music.

The top layer of problems here are the ones that can’t be explained away with the director’s alleged megalomania or the decisions made by the producer of this disc. Bluntly, this movie is dull, dull, dull. We have Count Wladislaw Sergius Karamzin (von Stroheim), late of the Russian aristocracy. He lives in Monte Carlo with his two “cousins, Olga (Maude George) and Vera (Mae Busch), in an opulent style that the trio cannot hope to afford and that includes freakishly long cigarettes. They receive counterfeit money from a man named Ventucci (Caesare Gravina) and otherwise survive by bilking the wealthy and gullible. The Count, who goes by Sergius, romances married women for their cash, and the women attempt to do the same thing to the men.

A new chance for them becomes available when an American ambassador named Hughes (Rudolph Christians) and his wife (Miss DuPont) arrive from America. Sergius immediately sets to work on winning here and then providing a sob story about a debt of honor that needs repayment. Meanwhile, Hughes is suspicious of the man he has heard is an inveterate womanizer and con artist. The trio’s maid Maruschka (Dale Fuller) also loves the Count, and will do anything to win him over.

That’s the whole plot. I have no idea how that could have possibly sustained 480 minutes of footage, nor how anyone could have watched that much of what is often quite amateurish.

Sergius’s plot for getting money appears to be acting charming, and then asking for cash. This is a tactic that evidently works not only on bored wives, but also on the wives of ambassadors and homely, skull-faced maids. Sergius is shameless and wanton, which is great, but his shamelessness and wantonness comes in service of a bland story blandly told. The title cards, written in a way to evoke excitement, fail miserably. Part of this stems from the style of the cards. Everything is—written—with dashes—spaced—throughout—evidently to generate—more interest—in what’s—going on. (Now go back and read that like Shatner!) At times, the film is so dialogue-heavy that minutes are spent reading with brief flashes of the characters mouthing the same words.

There are a couple of things that work, and a few good jokes. I like that our criminals are Russian and that Sergius evidently really is nobility and a former soldier. It makes sense that he would be in Monte Carlo, as he no doubt fled Russia after the revolution a few years earlier. That’s effective and interesting, and while nothing is really made of this, it’s easy to think that this is precisely what von Stroheim (who also wrote the film) intended. There’s a nice joke in the middle when we discover that Mrs. Hughes is reading a book called Foolish Wives by Erich von Stroheim.

But a good little joke and some smarts do not a movie make. Or they do, but they sure don’t make an interesting one. I’d be willing to watch this again with a cleaned-up version and an actual score that fits the action. But at the same time, I think that if this film really was so important to the canon, someone would have scored it and remastered it already.

Why to watch Foolish Wives: You have time to kill.
Why not to watch: There is virtually any other movie to watch or thing to do.
Posted by SJHoneywell at 9:59 PM