Able Was I Ere I Saw Elba 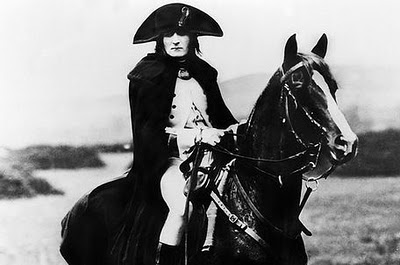 Most people in our society are experienced moviegoers. We’re aware of typical movie conventions and what to expect. We learn quickly what particular shots mean—what it means when we’re shown something in slow motion, or what a particular close-up means in the contexts of a film. Many of these conventions came from the earliest films, and many of these conventions were created by a handful of specific directors. Abel Gance was one of those truly innovative men behind the camera, and he showcases his innovative style in Napoleon.

This is not a film to watch lightly. There’s a lot going on here, as well as more than a dozen different cuts of the film. The one I found was the four-hour version. Evidently the original version of the film stretched to something longer than six hours, and there’s supposed to be a five-hour version considered fairly definitive. However, the four-hour version was all I could locate, and it’ll have to be definitive enough for our purposes here.

I have no idea what is contained in the hour or two I didn’t get to see, but the four hours on the two tapes I watched had plenty worthy of comment. If nothing else, Gance was an innovator and stylist as important (or far more important) than D.W. Griffith. As a real benefit here, Gance is also a much better storyteller than Griffith, or at least tells more interesting stories.

Napoleon, as the title indicates, is something of a biopic of Napoleon Bonaparte (Albert Dieudonne). It stops short of true biopic status, though, because it doesn’t come close to covering the man’s entire life or military career. It covers Bonaparte’s life as a child (Vladimir Roudenko), his early military career, the time of the French Revolution and the Reign of Terror and Bonaparte’s Italian campaign. We don’t see him crown himself Emperor, we don’t see his eventual exile, or his death. What’s here is sort of a career highlight film, a “best-of,” if you will.

There’s also a lot of hero worship going on. The Napoleon character in this film is as close to a perfect human being as can be imagined. He has no real faults or weaknesses. His mere presence inspires men on the battlefield; these men want only to know the name of the brave and intrepid leader who led them before they die, happy in knowing that they served such a great man. Early in the film, when Bonaparte is sent to Corsica to help maintain French rule, he runs into a meat grinder of pandemonium. Everyone, it seems, wants Corsica to belong to a different country. Some want Spain, others Italy, and still others England. The only thing they agree on is that Napoleon should be slain. But brave and forthright Napoleon stares them all down, cowing them into submission with his noble presence, and naturally Corsica remains a French possession.

Very much the same thing happens at the start of the film. Napoleon’s biggest fault as a child is that he’s not much liked by his classmates, in part because of his genius and in part because he comes from the little backward island of Corsica. Napoleon suffers the terrible slings and arrows of these classmates, who are regularly depicted as jealous of the young man’s genius. At one point, two of these young men release Napoleon’s captive falcon, sending the boy into a deep depression and causing him to fight all of his dormitory mates at the same time. All is made well when the bird returns, justifying Napoleon’s confidence in himself somehow.

The hero worship is applied with a very thick brush throughout the film. Much of Dieudonne’s job is evidently to stand perfectly still and stare straight ahead and look impressive. This stare is not the “thousand-yard stare” of combat veterans, but more the piercing gaze of someone touched by the gods of battle. If nothing else, this is an exercise in nationalism and Gallic pride.

All of this can be overlooked. The reason to watch this film is not to see Dieudonne stare piercingly at his enemies or sit statue-still astride a steed (enjoy my kick-ass alliteration!). Napoleon is noteworthy because Gance was a true innovator in terms of how and where he used his camera. Gance believed very much in the idea of a mobile camera, which is easier said than done when cameras weighed a metric ton. Regardless, many scenes are shot with the equivalent of a hand-held camera, predating the shaky-cam visions of films like The Blair Witch Project by more than half a dozen decades. Gance mounted cameras on horses, on a guillotine, on a trapeze, all in an effort to find and create new ways of capturing the action happening before him.

Also innovative is the use of lightning-fast cuts, switching from one scene to another at a pace just fast enough to allow comprehension. Some sequences feature so many quick cuts from one image to the next that it borders on subliminal messaging, and is still visually arresting now. Gance also uses split screens and multiple images, sometimes showing as many as nine different images—a 3x3 box—to indicate confusion, chaos, and constant motion.

The real great moment is when Gance projects three images simultaneously, creating the first ever use of a wide-screen format. Originally this required three projectors, one for each image. It may seem like a nothing these days, when we have become so used to wide-screen and letterboxing, but this is one of those moments when filmmaking truly grew up.

I admit the film seems too long. The copy I found came on a pair of VHS tapes, and with the exception of that wide-screen moment, I felt like I got the point of what Gance wanted to do and was trying to do by the end of the first half. The movie slows down some in the second half only to pick up again and build to that amazing climactic moment. I was tempted to fast-forward to get there. Under further review, the build-up is worth it. But it feels too long.

The story is good, but really secondary here. What’s exciting is what Gance did with the camera and what he showed could be done on celluloid. Its achievement is its innovation.

Why to watch Napoleon: Staggering camerawork.
Why not to watch: The first half is really enough for what’s important here (except for the end).
Posted by SJHoneywell at 11:56 PM