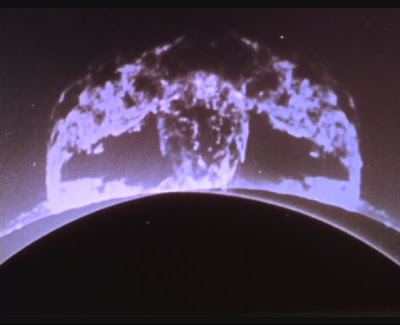 Experimental films are very much their own thing. Watching one takes intense concentration. This seems to be especially true of the film in question was made by Stan Brakhage. Dog Star Man could not legitimately be called anything other than an art film or an experimental film. It consists of layered images, film leader, seemingly random shots of trees, mountains, solar flares, and Brakhage’s naked wife, plus blood moving through blood vessels, frames marred (and sometimes completely obscured) by scratches, burns, and paint, the moon, and landscapes. This is not to say there isn’t a narrative in here somewhere—a man (Brakhage himself) walks up a mountain with is dog and chops down a tree. I said there was a narrative—I didn’t say it was War and Peace.

Because there is no story here, what we’re left with instead is the images that Brakhage presents and an attempt to make sense of them through the five parts of the film—Prelude (about a third of the running time), and Parts 1-4. Brakhage repeats images frequently, flashing back to solar flares and mountain scenery, for instance, and often rotates the film around so that we see the same image in multiple ways—the flares coming from the top of the sun, then the bottom, and left and right. Additionally, the film starts completely black for several minutes and stays black for a long time—long enough at points that it seems prudent to see if the disc is still playing.

The Prelude seems to be a sort of filmed equivalent of a life as told by Camus or Jean Paul Sartre. It starts in darkness, then shows brief flashes. While it never becomes coherent, it does develop as a series of images that metaphorically could work as a person’s life—we see work (the man, shirt off, with an axe), sex (Brakhage’s nude wife), birth (their child), aspirations (the sun, moon, and stars), and obstructions (the scratches and paint as well as the overlaid images on top of the main image), ending with a return to darkness and brief flashes of light.

Part 1 is the most coherent of the five parts of the film as well as the longest. While there is still some flashing around of images, this is the part of the film that contains something the most like an actual story. The man, now in winter, climbs up the side of a mountain, struggling the entire way, often slipping back almost as much as he advances through the heavy snow. It’s also the easiest to follow in the sense that there is no overlay of film through most of it, which makes it easier to see exactly what is going on at all times rather than trying to parse something out of the visual equivalent of having multiple people talking at the same time.

Part 2 brings in the image of Brakhage’s infant child. We still get the man trudging silently up the hill with his axe, but much more frequently we see the baby sleeping, yawning, eyes opening. Additionally, much of this section consists of two layers of film—a sort of main story of the infant with an overlay of scratches, snowflakes, and lens flares. Brakhage gets very artsy here, essentially scratching out parts of the film and placing new images inside these burned out locations. Inventive stuff.

Part 4, overlaid with images almost to incomprehensibility, is blessedly only a few minutes long. We get flashes back to all of the earlier parts—the solar flares, the infant, and functioning organs, plus a lactating breast or two. We also get religious imagery for the first time. So with work (Part 1), family (Part 2), sex (Part 3), we finally get a realization of mortality and a grasp for meaning and something beyond this life.

It’s worth noting here that Dog Star Man is completely silent—not even a musical soundtrack, which makes it quite punishing to watch. I had never really realized how attached we become to the idea of sound in a film; the music is so intrinsic to the experience. In this sense, watching this film is not unlike watching what amounts to Brakhage’s home movies. You may want to supply your own soundtrack for this. I recommend either something full-on psychedelic or something slowcore. Pink Floyd and The Amboy Dukes or Low and Red House Painters —your choice.

More to the point, this is a film that I think would be far more interesting to study frame-by-frame than to actually watch. Some of the specific sequences are quite striking, as are some of the frames covered in scratches, burns, and pockmarks. Going past at 24 fps, they become a sort of radiant blur, difficult to capture. I did pause the film a few times on some great shots that I feel I would have easily missed had I not stopped the proceedings. The scratches in places are so intricate that they deserve to be studied like a great painting, particularly when Brakhage puts other images inside burn marks.

All this is fine, and I understand why Dog Star Man made the list. But I don’t like it. It’s like talking to a stoned hippie. The stoned hippie is so completely sure that he or she is blowing your mind by telling you about his or her great revelation that came from an extra hit of acid or by smoking a little more pot than medically necessary when in reality, you’re just having the tits bored off you. Seeing what amounts to someone else’s acid flashback isn’t really that entertaining.

As a final note, The Book lies about this film. It claims that it is a mere 30 minutes long. Part 1 is about that length, but the entire thing runs somewhat over 75 minutes. That’s quite a shock if you were expecting a weird little short you could knock out easily. Even at half an hour, it’s an ordeal. At 150% longer, it’s an epic tale told by someone who has burned out his brain on a hash pipe.

Why to watch Dog Star Man: It’s truly ars gratia artis, and that should be celebrated.
Why not to watch: Overwhelming bongwater stench.
Posted by SJHoneywell at 11:37 PM